The most elaborate patent filing by Apple for a future inductive charging system first surfaced in 2013 in our report titled "Apple Reveals Master Details of Wireless Charging System." Since that time Apple has filed another ten patent applications covering a wide range of inductive charging ideas. Earlier today we posted a report titled "Apple Invents Next Generation 'Smart Connector' for iPad, iPhone & beyond," wherein it was revealed that Apple is considering the integration of an inductive charging system into a future iPhone. Later this morning we discovered that the U.S. Patent and Trademark Office also published a patent application from Apple that reveals an elaborate inductive charging system that will allow multiple devices to be charged from a single major device. For instance, a user would be able to charge an iPhone and an Apple Watch when aligned right on the face or the back of an iPad. The Patent further illustrates that the lid of a MacBook or MacBook Pro could double as a charging pad that could recharge 8 or more devices as one time with only the MacBook being plugged in to a power source.

Some electronic devices include one or more rechargeable batteries that may require external power to recharge. Often, these devices may be charged using a common or standardized electrical connector or cable. For example, some devices may be charged using a universal serial bus ("USB") connector or cable. However, despite having standardized connectors and cable, each device may require a separate or dedicated power supply to charge. In some cases, having separate power supplies for each device may be burdensome to use, store, and/or transport.

In some embodiments, the electrically communicative inductive coils may act as transmitting coils and/or receiving coils capable of transmitting power between the electronic devices. 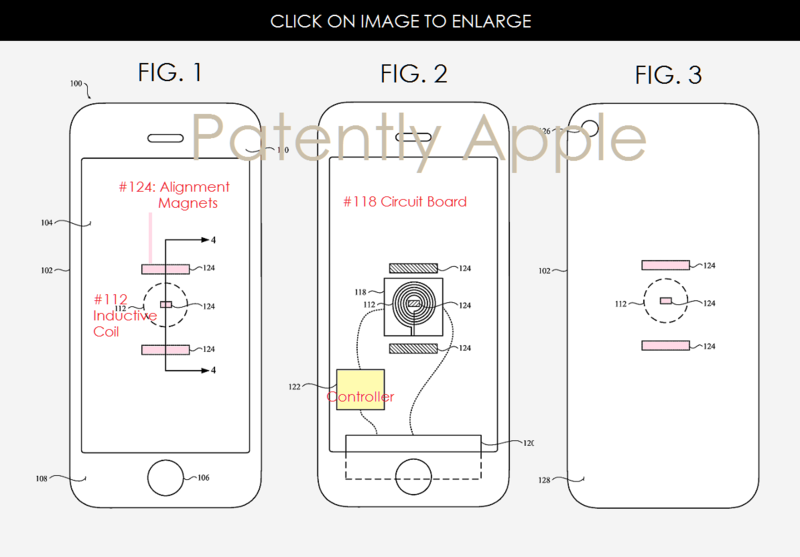 Apple's patent FIG. 5A shows an illustrative front view of a second electronic device including a group of inductive coils; FIG. 5B shows an illustrative back view of the second electronic device of FIG. 5A; FIG. 13 shows two devices charging on the back of an iPad whereas FIG. 14 illustrates how an iPhone and Apple Watch can be over each other on the face of an iPad, aligned and ready for charging. 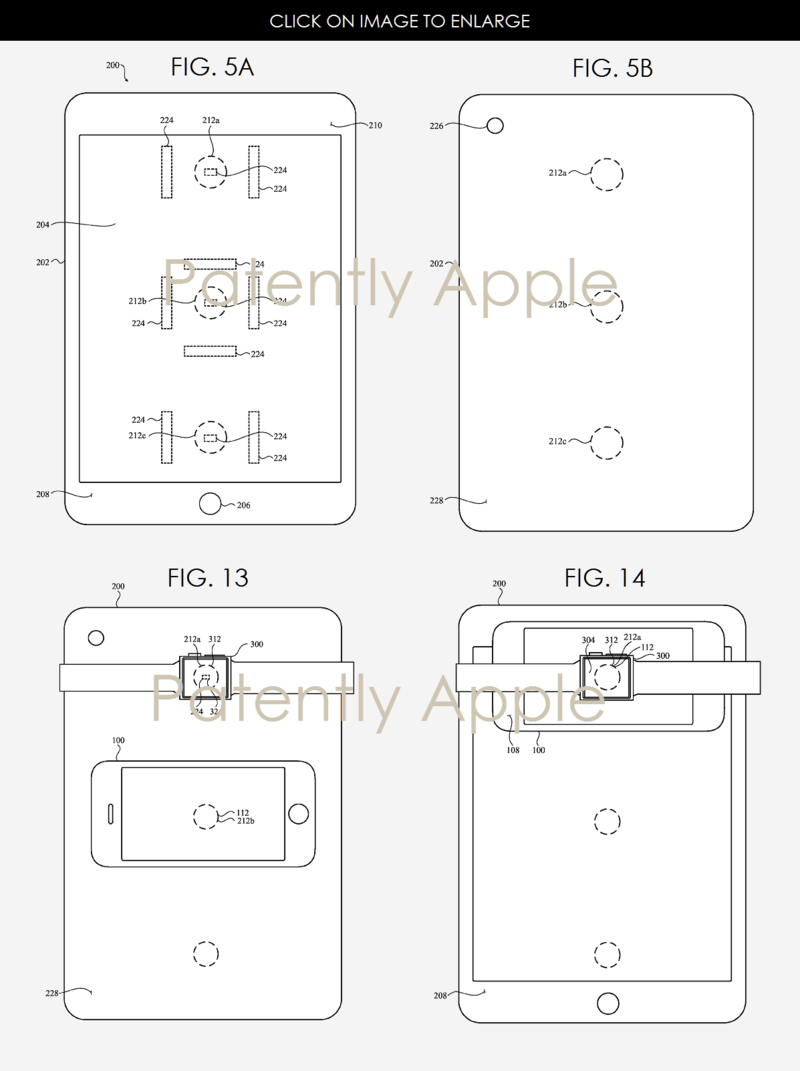 Apple's patent FIGS. 7A and 17 illustrate how multiple inductive charging coils can be placed under the frame of a MacBook that could accommodate charging of multiple devices at one time. 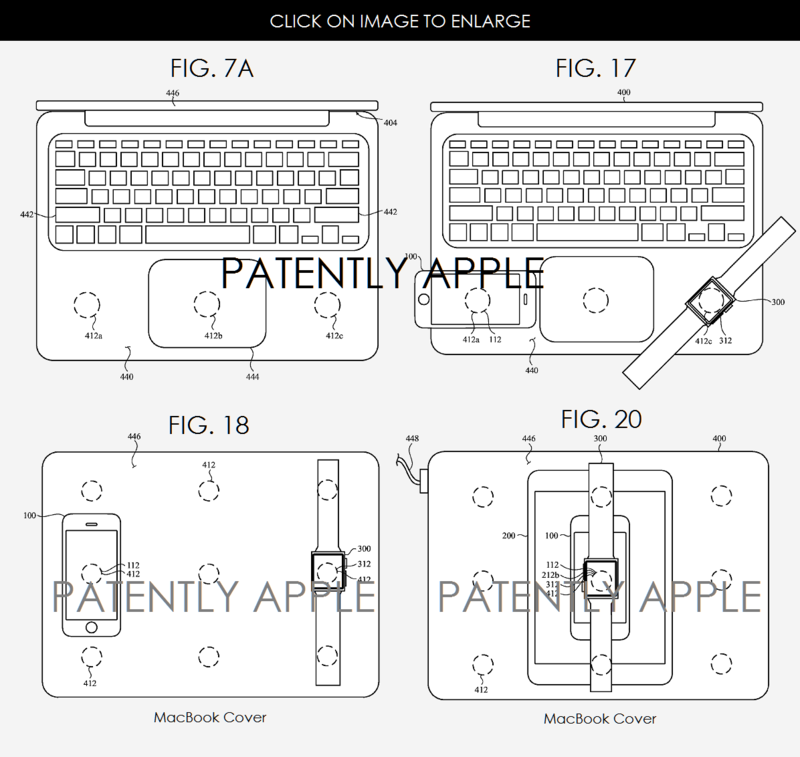 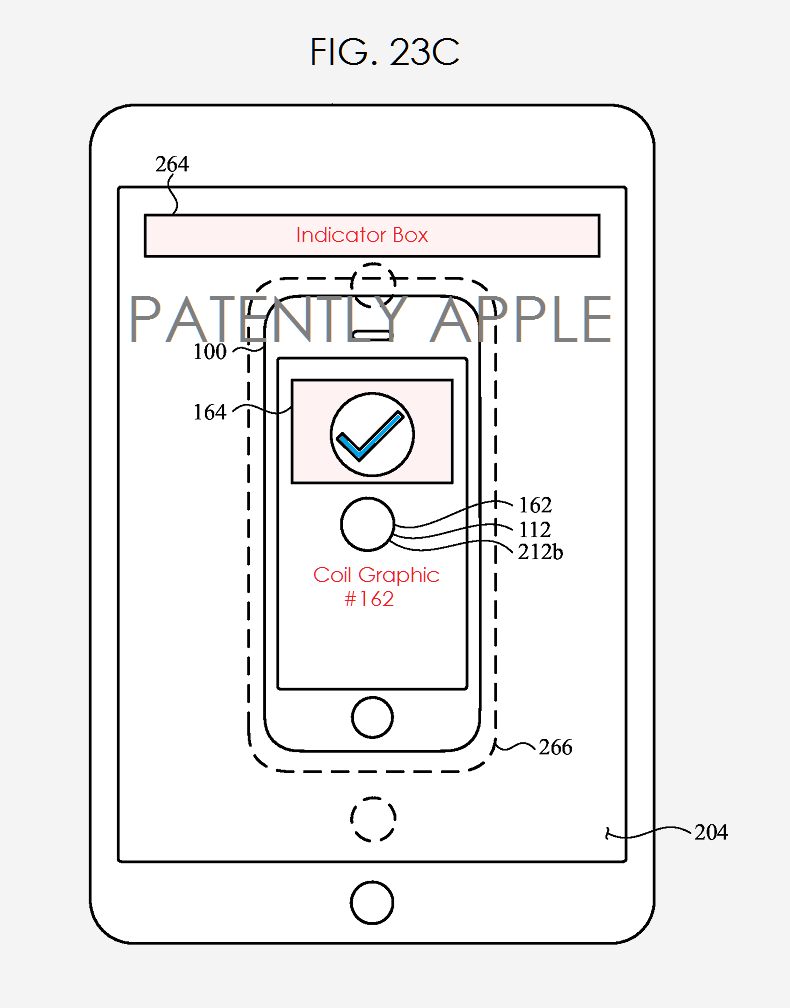 As shown in Apple's patent FIG. 23C, a user may position an iPhone over an iPad within a device outline. The devices will then illustrate where the coils are so that alignment can be made and once the coil markers are properly aligned an indicator box (or boxes) will signal to the user that that alignment has been successfully achieved.