According to a new IDC report, the worldwide wearable device market took a big step forward in the fourth quarter of 2015 (4Q15), fueled by the growing popularity of fitness trackers and the Apple Watch. Vendors shipped a total of 27.4 million units during the holiday quarter, besting 4Q14 levels by 126.9%. For the full year, vendors shipped a total of 78.1 million units, up a strong 171.6% over 2014.

The report noted that "Apple grew its Watch distribution, enjoyed holiday promotions, and drove the company's overall 'Other Products' revenue during 4Q15. However, volumes for the quarter grew only slightly from the previous quarter." Expectations are higher for the next-generation Watch that's rumored to debut next month. 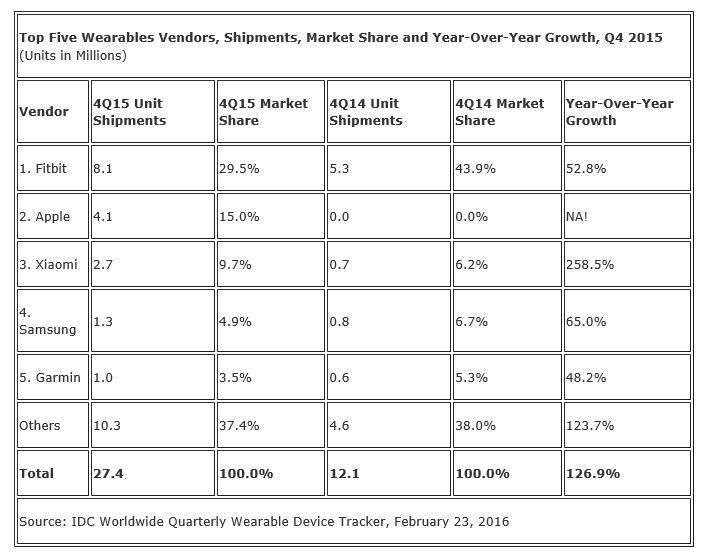 IDC puffed up Fitbit by stating that they "ended the year the same way it began the year: as the undisputed worldwide leader of wearable devices. The same drivers were in play: a well-segmented device portfolio, a fast-growing corporate wellness program, and extended market reach around the world."

And yet if you're a one-trick pony consumer gadget company like Fitbit is, then investors will quickly send you to Wall Street's equivalent of the tech stock glue factory. The darling Fitbit who had a decent holiday quarter missed Wall Street estimates forecast by a wide margin, as the wearable fitness device maker aggressively invests in new products, sending its shares down more than 16 percent in after-hours trading, according to Reuters.

Fitbit plunged nearly 20% Tuesday after the company said late Monday that sales and earnings for the first quarter would fall far short of analysts' forecasts. At least 10 Wall Street analysts slashed their price targets for Fitibt on Tuesday morning following the weak guidance, according to FactSet Research.