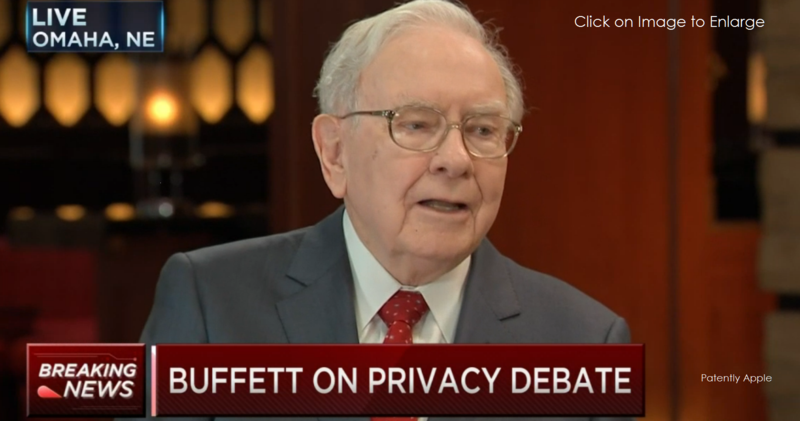 This morning we posted a report titled "On Tuesday, Apple will face one of the Biggest Corporate Challenges in its History." As the day has gone on, new reports have surfaced with one stating that there could be serious consequences for Apple should the judge decide to make an example of them and Warren Buffet weighs in the matter in a new CNBC video interview.

We learn from Cooper Levenson attorney Peter Fu that should "Apple openly defies or ignores the demands in the order signed by Magistrate Judge Sheri Pym, the court would most likely wield a civil contempt-of-court charge as the mechanism to coerce Apple to comply."

The Fast Company report further explores many of the possible penalties that Judge Pym could hand out tomorrow, from fines in the $10,000 to $250,000 range per/day until Apple complies. And if Apple goes to the Supreme Court and still refuses to comply, then Cook could be jailed. Yet Apple believes that only Congress could decide the law that Apple will comply with because the standing laws don't address this modern day issue of privacy and the new world of encryption.

David O'Brien, senior researcher at the Berkman Center for Internet & Society at Harvard, points out that federal law enforcement has been trying to bring the whole matter to a head for quite some time. Law enforcement wants the establishment of a firm set of rules defining tech companies' responsibilities when asked to assist in an investigation. O'Brien says the courts were definitely not the government's first choice of venue for this, but rather its third choice.

Congress was its first choice. Law enforcement has been pressing members of Congress to pass a bill for many months, and while some bills are circulating, nothing's expected to reach the president's desk any time soon.

And this is likely why Apple's Tim Cook is favoring this angle as this could drag out for years. The ball is in the government's court to get something passed in Congress, but Congress won't entertain legislation forwarded by the Obama administration for anything, let alone anything to do with National Security. To learn more about the numerous 'ifs' that could play out tomorrow, read the full Fast Company report here.

Warren Buffet Weighs in on Apple and National Security

Warren Buffett weighing in on Apple's fight against a government order to help hack the iPhone of one of the San Bernardino terrorists stated on CNBC today that "National security should supersede privacy concerns in major issues. "We live in a very, very, very dangerous world. If you were in the early days of September 2001 and you were receiving credible information that something was going to happen ... I think that in that case security trumps privacy."

However, on the flipside, Buffett noted that he wasn't in favor of the law "fishing around on smaller-type things." In those cases he'd side on the side of privacy.

This is what's complicating the matter. Apple's current case is about the terrorist's phone. On that issue, a slim majority of Americans favor the Government forcing Apple to comply with the order. Yet when it comes to general snooping on smartphones hoping there's evidence, the public is weary and yet this is what Vance's argument is about. Not national security but for everyday crimes as he notes in the video above. This is what Apple is vehemently against. Though in the big picture at the moment, Apple is saying no to any case where they're asked to provide private information.

Will there be fireworks tomorrow when the judge makes her ruling? Perhaps, depending on what the ruling delivers. Yet I think it's safe to say that Apple's defiance against the court being so public will exact a steep price. Everyone following this case will, no doubt, be glued to their mobile devices tomorrow waiting for the official ruling to ring out. But one thing we know for sure: this is only the beginning of the war, not the end. No solution will come of this tomorrow and both sides will sharpen their knives preparing for round two – So stay tuned.

Other Recent Reports on this Matter

Apple's Legal Motion - The 'All Writs Act' doesn't give the Court a Roving Commission to Conscript and Commandeer Apple - Feb 26, 2016

Apple Files to Vacate Order on Shooter's iPhone while a Congressman States Apple Risks having Blood on their Hands Feb 26, 2016

Apple CEO on ABC News: Creating Software Enabling the FBI to unlock an iPhone is Software Equivalent of Cancer Feb 24, 2016

Poll: Slim Majority of Americans Think the Government Should be able to Look at Smartphone Data to Fight Terrorism Feb 24, 2016

Apple Confirms they'll refuse to obey the Court Order on the Basis of Free Speech Feb 24, 2016