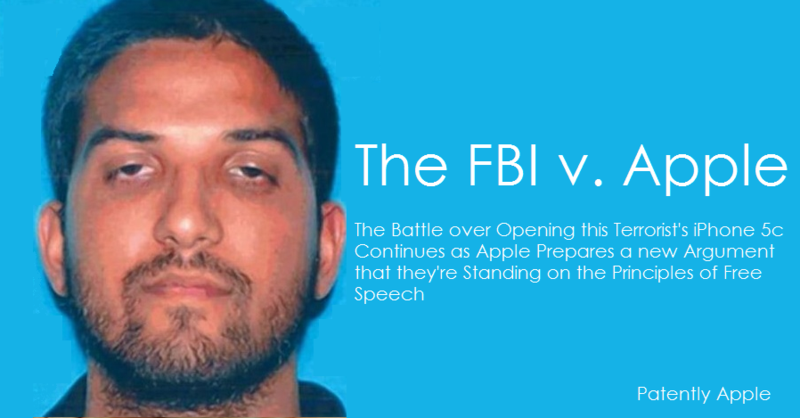 In two new reports published late yesterday we learn a little more about the decision behind Apple's move to fight the U.S. Court order to assist the FBI and Apple being given three additional days to prepare their argument to the judge that will now include an argument about protecting free speech.

In a report published late yesterday by the New York Times they noted that Apple's CEO "standoff with law enforcement officials is indicative of his personal evolution from a behind-the-scenes operator at Apple to one of the world's most outspoken corporate executives. During that time, he has moved a once secretive Silicon Valley company into the center of highly charged social and legal issues. While Mr. Cook's predecessor, Apple co-founder Steven P. Jobs, was considered a business icon, he never took aggressive positions on such matters as Mr. Cook now has.

Being at loggerheads with the United States government is risky for Apple and may draw a torrent of public criticism of the world's most valuable company at a time when its growth rate has significantly decelerated.

His outspokenness has drawn criticism, with some investors questioning how nonbusiness initiatives — including some of Apple's environmental moves — would contribute to the company's bottom line.

Apple was growing tired of requests from government officials worldwide asking the company to unlock smartphones.

Each data-extraction request was carefully vetted by Apple's lawyers. Of those deemed legitimate, Apple in recent years required that law enforcement officials physically travel with the gadget to the company's headquarters, where a trusted Apple engineer would work on the phones inside Faraday bags, which block wireless signals, during the process of data extraction.

Processing these requests was extremely tedious. More worrisome, the data stored on its customers iPhones was growing more personal, including photos, messages and bank, health and travel data.

And some government officials were not exactly instilling confidence in Apple's engineers.

After December's San Bernardino attack, Apple worked with the F.B.I. to gather data that had been backed up to the cloud from a work iPhone issued to one of the assailants, according to court filings. When investigators also wanted unspecified information on the phone that had not been backed up, the judge this week granted the order requiring Apple to create a special tool to help investigators more easily crack the phone's passcode and get into the device.

The New York Times article notes that "Apple had asked the F.B.I. to issue its application for the tool under seal. But the government made it public, prompting Mr. Cook to go into bunker mode to draft a response, according to people privy to the discussions, who spoke on condition of anonymity. The result was the letter that Mr. Cook signed on Tuesday where he argued that it set a 'dangerous precedent' for a company to be forced to build tools for the government that weaken security.

'Compromising the security of our personal information can ultimately put our personal safety at risk," he wrote. "That is why encryption has become so important to all of us.'"

What's hard to understand at this point however, is that Apple provided the FBI with the San Bernardino terrorist's iCloud information from his last backup, according to a Wall Street Journal report that we covered yesterday. So why was it okay for Apple to provide personal information from the terrorist to the FBI from iCloud but hacking an iPhone 5c which Apple could do in their sleep is so egregious? It would seem that Apple's conscience isn't consistent with their public stance on this issue. Personal information is personal information, so why stop at hacking the iPhone? Perhaps we'll find the answer to this when Cook is questioned by Congress. It'll be interesting to hear how they parse their decision making on privacy between personal information in iCloud and an iPhone.

For more on this part of the story, review the full New York Times report here. The report is jam packed with additional information on Apple and Cook's position on this explosive battle over a court order issued to them this week, not covered in this report.

On another front late yesterday we learn from Reuters that Apple "will likely seek to invoke the United States' protections of free speech as one of its key legal arguments in trying to block an order to help unlock the encrypted iPhone of one of the San Bernardino shooters, lawyers with expertise in the subject said this week."

The report further noted that Apple was granted three additional days by the court to file a response to the order. Apple will now have until Feb. 26 to send a reply.

In addition, Apple has reportedly retained two prominent, free-speech lawyers to do battle with the government, according to court papers: Theodore Olson, who won the political-speech case Citizens United v. Federal Election Commission in 2010, and Theodore Boutrous, who frequently represents media organizations.

Apple could argue that being required to create and provide specific computer code amounts to unlawful compelled speech, said Riana Pfefferkorn, a cryptography fellow at Stanford University's Center for Internet and Society.

The order against Apple is novel because it compels the company to create a new forensic tool to use, not just turn over information in Apple's possession, Pfefferkorn said. "I think there is a significant First Amendment concern," she said.

Yet the report further noted that "A speech-rights argument from Apple, though, could be met with skepticism by the courts because computer code has become ubiquitous and underpins much of the U.S. economy." For more on this part of the story, see the full Reuters report here.

Other Recent Reports on this Issue

Apple Assisted the FBI on the San Bernardino Case but the Essential Last 44 Days of Data is Locked in the iPhone 5c – Feb 18, 2016

WSJ: Tim Cook is playing a Dangerous Game of Brinkmanship with the U.S Government - Feb 17, 2016

Edward Snowden Steps into Apple's Privacy Case: "This is the most important tech Case in a Decade" - Feb 17, 2016