The Specific Allegations Found in the Immersion Lawsuit against Apple Emerge

Yesterday we reported that Immersion Corporation sued Apple over their Touch Feedback Technology. Our report covered the basics of the lawsuit through the eyes of Immersion's press release. We closed our report stating that "Should important details arise in the actual patent infringement documents filed with the court, Patently Apple will promptly post a follow-up report in the days ahead." This morning I reviewed Immersion's court filing and this report now covers the specifics of the lawsuit against Apple.

Nature of the Immersion Action

In Immersion's complaint before the court, they lay out the foundation of their case which revolves around 'haptics.' Immersion reveals that they have more than 2,100 world-wide granted patents with many focused on haptics covering effects and sensations.

Immersion points out that "Different sensations may be conveyed by varying the type, duration, intensity, or frequency at which the actuator operates." And this point is at the very heart of their complaint.

It is believed by Immersion that Apple's Force Touch, 3D Touch and Taptic Engine technologies infringe upon their intellectual property. They point to Apple's 3D Touch webpage and the one covering the Taptic Engine. 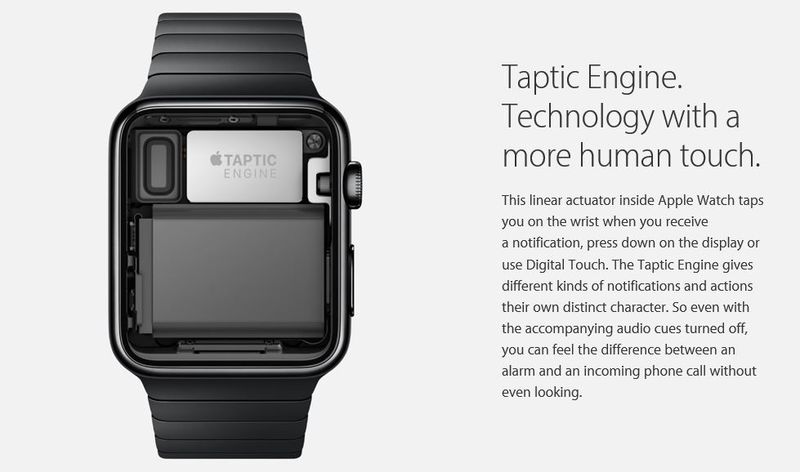 Over and above the noted graphics above that they present in their complaint, they point out Apple's specific marketing verbiage as follows:

"All-new Taptic Engine: iPhone 6s give you real-time feedback both onscreen and in the form of subtle taps from the Taptic Engine. These responses correspond to how deeply you're pressing the display, and they let you know what actions you're performing and what you can expect to happen."

"3D Touch – The next generation of Multi-Touch: iPhone now senses how deeply you press the display, opening up new possibilities for how to interact with your content and letting you do all Kinds of essential things more quickly and simply."

"Force Touch. Sensitive enough to tell a tap from a press. In addition to recognize touch, Apple Watch senses force, adding a new dimension to the user interface. With Force Touch, pressing firmly on the display brings up additional controls in apps such as Messages, Music, and Calendar. It also lets you do things like select different watch faces, pause or end a workout, and search for address in Maps."

According to Immersion, there are two distinct patents that Apple has infringed, specifically U.S. Patent No. 8,619,051 titled "Haptic Feedback System with Stored Effects," and U.S. Patent No. 8,773,356 titled "Method and Apparatus for Providing Tactile Sensations"

The complaints also assert infringement by the iPhone 6s and iPhone 6s Plus of their U.S. Patent No. 8,659,571 titled "Interactivity Model for Shared Feedback on Mobile Devices"

"Apple has infringed and is currently infringing the '356 patent: The '356 patent relates to haptic feedback in handheld electronic devices that have a touchscreen. The '356 patent teaches, among other things, systems and methods for providing tactile sensations, including displaying a graphical object on a touch-screen, receiving a sensor signal indicating an object contacting the touch-screen, determining an interaction between the object contacting the touch-screen and the graphical object, generating an actuator signal based at least in part on the interaction and haptic effect data in a lookup table, and outputting a haptic effect to an actuator based at least in part on the actuator signal.

"The accused devices generate an actuator signal (e.g., a haptic effect to be played by the "Taptic Engine") based at least in part on the detected press interaction and haptic effect data in a lookup table. As one example, during a "Peek" or "Pop" interaction on an Apple iPhone 6s or Apple iPhone 6s Plus, the devices measure the pressure level of a user's finger on a graphical object on the touch screen and use a lookup table to cause different haptic effects to be played depending on whether a "Peek" or a "Pop" is detected."

"As another example, using the "Force Touch" feature on an Apple Watch, Apple Watch Sport, or Apple Watch Edition, the devices will measure the pressure level of a user's finger touch on a graphical object and will use a lookup table to cause different haptic effects to be played. Additional details relating to the accused devices and their infringement are in the possession of Defendants."

"Apple has infringed and is currently infringing the '051 patent: "The '051 patent relates to haptic feedback in handheld electronic devices. The '051 patent teaches, among other things, systems and methods for generating haptic feedback, including storing a plurality of pre-defined haptic effects that are accessible to multiple applications via an application programming interface, receiving a request for a pre-defined haptic effect from an application, retrieving the requested effect via the application program interface, generating a drive signal based on the effect, and applying the drive signal to an actuator to provide a haptic effect."

"Apple has infringed and is currently infringing the '051 patent: The '571 patent relates to haptic feedback in electronic devices. The '571 patent teaches, among other things, systems and methods of producing a haptic effect, including receiving first and second gestures signals, generating a dynamic interaction parameter using the signals, and applying a drive signal to a haptic output device according to the dynamic interaction parameter."

The patent infringement case presented in today's report was filed in the Delaware District Court. At present, no Judge has been assigned to case 1:2016cv00077.