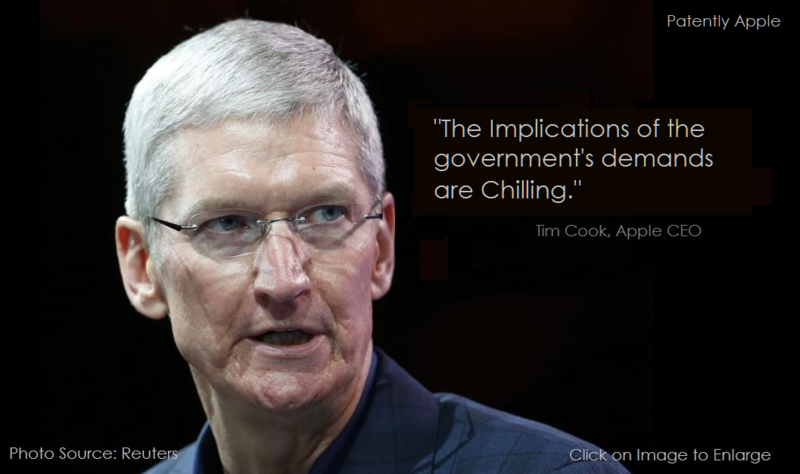 On February tenth Patently Apple posted a report titled "FBI Director Frustrated with Inability to Access Data from One Smartphone from the San Bernardino Terrorists." Our report noted James Comey, FBI Director stating that "Investigators still have not been able to access the contents of one of the cell phones used by the San Bernardino shooters two months ago." Comey cited that particular problem as an illustration of authorities' frustration with technology that allows cell phones to lock with no apparent means to override that default position, slowing all sorts of cases, from terror conspiracies to more ordinary criminal investigations — even when a judge rules that the phone contained useful data." Then on February 13 we posted a related post titled "Apple Seeks Court's Relief over Issue of Unlocking iPhones." In that report we noted that "Apple recently wrote a letter to the judge advising him that they're now being pressed by the government to open yet another iPhone and need a ruling in order to know how to proceed with this new case. The other iPhone may very well involve the San Bernardino terrorist's smartphone that was in the news this week." Late last night it was revealed that indeed the other smartphone that Apple had referenced to the judge was indeed owned by terrorist Syed Rizwan Farook.

Late yesterday Reuters reported that "A U.S. judge on Tuesday ordered Apple Inc to help the FBI break into a phone recovered from one of the San Bernardino shooters, an order that heightens a long-running dispute between tech companies and law enforcement over the limits of encryption.

Apple must provide "reasonable technical assistance" to investigators seeking to unlock the data on an iPhone 5C that had been owned by Syed Rizwan Farook, Judge Sheri Pym of U.S. District Court in Los Angeles said in a ruling.

The Reuters report further noted that "Federal prosecutors in Los Angeles on Tuesday requested the court order to compel Apple to assist the investigation into the Dec. 2 shooting rampage by Farook and his wife that killed 14 people and injured 22 others. The two were killed in a shootout with police.

The FBI has been investigating the couple's potential communications with the Islamic State and other militant groups and treating the case as an incident of domestic terrorism.

"Apple has the exclusive technical means which would assist the government in completing its search, but has declined to provide that assistance voluntarily," prosecutors said.

Prosecutors said Apple could still help investigators by disabling "non-encrypted barriers that Apple has coded into its operating system."

Forensics expert Jonathan Zdziarski said Tuesday Apple might have to write custom code to comply with the order, presenting a novel question to the court about whether the government could order a private company to hack its own device.

In the Wall Street Journal's report on the matter they add that "Apple Chief Executive Tim Cook said early Wednesday that the company would oppose the judge's order saying it was an "unprecedented step which threatens the security of our customers" with "implications far beyond the legal case at hand."

In Apple's official response that is posted on their website, Apple's CEO covers topics titled The Need for Encryption; The San Bernardino Case; The Threat to Data Security; and a Dangerous Precedent.

Apple's Tim Cook in discussing the San Bernardino Case in particular, noted that "the FBI wants us to make a new version of the iPhone operating system, circumventing several important security features, and install it on an iPhone recovered during the investigation. In the wrong hands, this software — which does not exist today — would have the potential to unlock any iPhone in someone's physical possession."

Cook added that "The FBI may use different words to describe this tool, but make no mistake: Building a version of iOS that bypasses security in this way would undeniably create a backdoor. And while the government may argue that its use would be limited to this case, there is no way to guarantee such control."

While Cook noted that "The government is asking Apple to hack our own users," I think that the proper context here is that this user was a killing terrorist. Cook also stated that "The government could extend this breach of privacy and demand that Apple build surveillance software to intercept your messages, access your health records or financial data, track your location, or even access your phone's microphone or camera without your knowledge."

And yet the context has always been that the government would require a court order to prove the need to have access to a criminals' iPhone. Not a regular citizen's iPhone, one owned by a criminal or terrorist. Apple makes a huge leap in their letter to add fear that the government could demand surveillance software that is so beyond the San Bernardino case that it's not funny. Apple is creating a fear scenario that is not on the table by the government. What is presented to the court is restricted to opening of the San Bernardo iPhone and to assist the government in all similar cases under specific circumstances.

If the government would ever make the leap that is currently only in Apple's make believe scenario, then I think they'd have a strong case. But creating an evil-government scenario to support this current situation is overboard. You could read Apple's full response titled "a Message to our Customers," here.

According to the Wall Street Journal (WSJ), the government's filing before the court states that "Evidence in the iCloud account indicates that Farook was in communication with victims who were later killed during the shootings perpetrated by Farook…and toll records show that Farook communicated with Malik using the subject device.

The filing further noted that "Farook may have disabled the automatic iCloud backup function to hide evidence. There may be relevant, critical communications and data around the time of the shooting that has thus far not been accessed, may reside solely on the subject device, and cannot be accessed by any other means known to either the government or Apple."

A last point made by the WSJ is that "The filing also says San Bernardino County officials have told investigators the automatic backup feature was turned on when the phone was given to Farook. Before Oct. 19, backups occurred 'with almost weekly regularity.'"

As we've said time and time again, this issue will be with us for some time to come. This week the movie "Trumbo" is on iTunes for rent. It's a story about Dalton Trumbo (played by Bryan Cranston) who was Hollywood's top screenwriter until he and other artists were jailed and blacklisted for their political beliefs.

History has shown us that right-wing governments in the U.S. and around the world have turned on groups of citizens and turned their lives upside down. So when I read Cook's statement about the "FBI's good intentions," I couldn't help but think of the old saying that states that "The road to hell is paved with good intentions." One interpretation of that saying "is wrongdoings or evil actions are often masked by good intentions, or even that good intentions, when acted upon, may have unforeseen bad consequences."

So in the big picture, citizens are generally leery of the government's intentions especially in light of the recent Edward Snowden revelations about government surveillance going overboard. And Cook's argument plays right into that fear and line of thinking. With that said, what the court is now asking of Apple is not in that dramatic league.

At the end of the day, Judge Sheri Pym of U.S. District Court in Los Angeles said in a ruling that Apple must provide "reasonable technical assistance" to investigators seeking to unlock the data on an iPhone 5C that had been owned by Syed Rizwan Farook. Judge Pym also stated that Apple has five business days to contest the order if it believes compliance would be "unreasonably burdensome."

Apple has responded in full to their user base. Yet what Apple will actually state in their formal response to the court may or may not be the same and may or may not be made public. The response to the government however, won't be able to intentionally veer off into their theories of potential government threats or intrusions down the road. They'll have to focus rightly on the specific request at hand.

Other Reports on the Encryption Issue