Home Archives Contact Us Subscribe Twitter MeWe Facebook Patently Mobile
Apple's Legal Motion: The 'All Writs Act' doesn't give the Court a Roving Commission to Conscript and Commandeer Apple
Presidential Candidate Rubio on Apple: "Let me tell you their Brand is not Superior to the United States of America"

Tablets are Dead … for Android, but Apple Remains a Believer 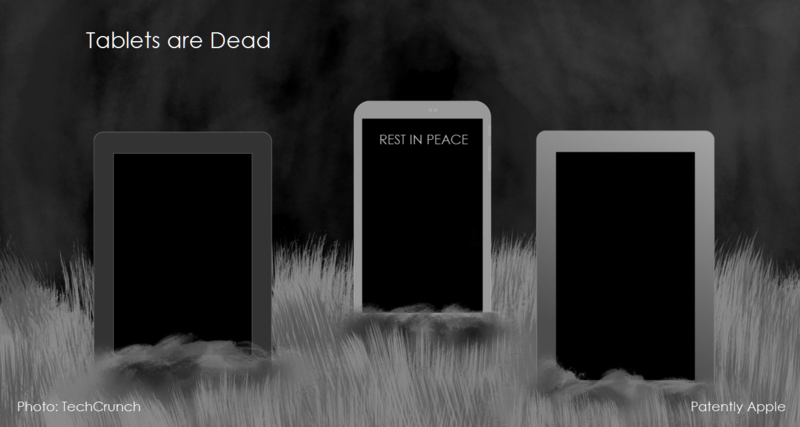 A new report states that "In 2010, tablets were supposed to be the new hot thing. Apple released the first iPad, Samsung was working on the Galaxy Tab and countless others were about to flood the market with Android tablets. Six years later, there weren't any tablets at Mobile World Congress in Barcelona. Companies and consumers have moved on. Tablets are dead."

The new TechCrunch report further stated that "In fact, Samsung, Sony, HTC and LG didn't have any new tablet to announce. They didn't even mention tablets during their conferences. It's not just that people don't care about tablets anymore — the big electronics companies themselves aren't even trying to release new products for this market anymore.

TechCrunch reporter Romain Dillet further added that "Sure, Lenovo released some cheap Android tablets, but it seems like nobody noticed. Huawei announced the MateBook, but this isn't technically a tablet — it's a Surface Pro-like device running Windows 10 for laptops.

There are a few reasons why tablets have become so unpopular. First, tablets are now a commodity. You can find dozens of perfectly fine tablets for less than $200. And there's no differentiating factor between Android tablets. As a result, companies are not making a profit on them. Second, chances are you already have a tablet at home and it's working fine."

TechCrunch concludes that "Tablets had a good run, but won't be around for much longer. The iPad is still selling well, but Apple is trying hard to differentiate the iPad. While tablets can still make a comeback, they need to become good laptop replacements, or a digital canvas for artists, or something else. But something needs to change and soon. Current tablets prove that you should never bet against the smartphone."

On March 15 Apple will be rebranding their next-gen 'iPad Air' to that of the 'iPad Pro' – to extend that line-up and support their Smart Keyboard and Apple Pencil. Apple is now blurring the line with Microsoft's Surface Pro category as the industry shifts to the 2-in-1 form factor that's also known as hybrids or detachables. In fact, Apple's iPad Pro now stands as the number one detachable on the market today, according to IDC's February report.

Last July Apple's CFO Luca Maestri reminded financial analysts during a financial conference call that Apple doesn't participate in the low end of the tablet market and that they are extremely successful where they do compete. Maestri stated that Apple owned 76% market share of tablets priced above U.S. $200. In that same conference call Apple's CEO firmly stated that the iPad had a lot of runway to go.

So at the end of the day, is the tablet segment of the market really dead as TechCrunch states? Yes, it's true, if you keep that statement in context and confined to copycat tablets from Android OEMs.

As for Apple, while sales have been slowly drifting lower for some time now, they still believe that this market segment has more room to grow as they're beginning to position it as a Mac replacement product. In November, Apple's CEO told the Telegraph, "I think if you're looking at a PC, why would you buy a PC anymore? No really, why would you buy one?" Cook added, "Yes, the iPad Pro is a replacement for a notebook or a desktop for many, many people. They will start using it and conclude they no longer need to use anything else, other than their phones."

Is Apple fighting the tablet decline reality train or will they be able to take the iPad to a whole new level with compelling new features in the next few years? While it's getting harder to see where Apple's enthusiasm is coming from, they deserve the benefit of the doubt, at least for now.