It looks like a new patent war front has just opened up against Apple. Earlier today Immersion Corporation, a developer and licensor of touch feedback technology, published a press release announcing that they've both filed a complaint with the U.S. International Trade Commission ("ITC") against Apple Inc., AT&T Inc., and AT&T Mobility LLC and a patent infringement complaint against Apple, AT&T and AT&T Mobility in the U.S. District Court for the District of Delaware.

Immersion's CEO Victor Viegas noted in the press release that "Immersion and its employees have worked diligently for over 20 years to invent solutions and build an ecosystem of content and playback devices that enable realistic and rich digital experiences. Touch matters, as it informs, excites and humanizes the digital world we interact with every day. Many of our licensed customers are market leaders that benefit from our innovation in touch technology."

Viegas added that "While we are pleased to see others in the industry recognize the value of haptics and adopt it in their products, it is important for us to protect our business against infringement of our intellectual property in order to preserve the ecosystem we have built and the investments that we have made in continuing to advance haptic experiences. We will vigorously defend the intellectual property we have developed when it is infringed."

In the ITC complaint, Immersion is seeking an exclusion order preventing the importation, sale for importation, and sale after importation of infringing Apple devices into the United States by the defendants and appropriate cease and desist orders. In the U.S. District Court suit, Immersion is alleging infringement of the same patents and is seeking to stop further infringement by the defendants, and to recover damages. 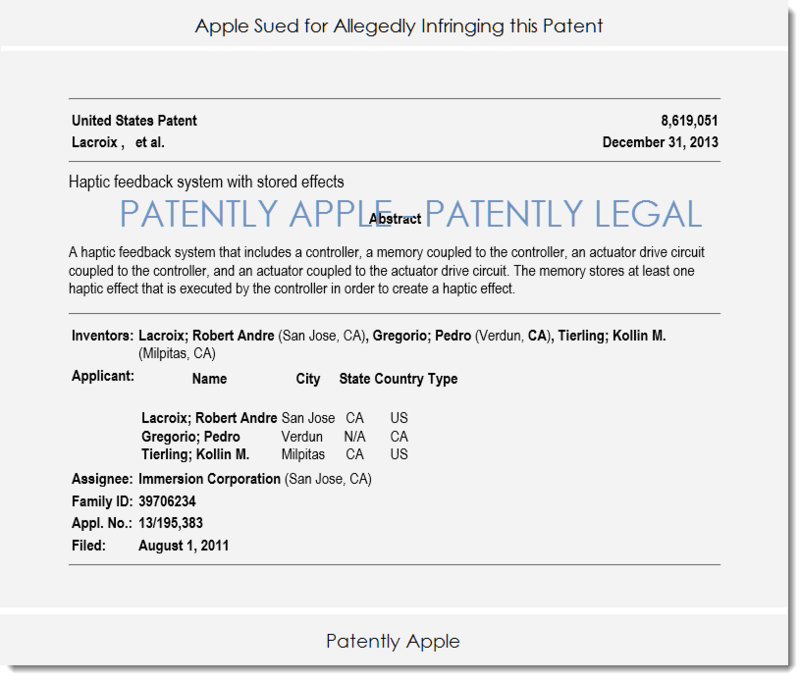 According to Immersion, there are two distinct patents that Apple and others have infringed, specifically U.S. Patent No. 8,619,051: "Haptic Feedback System with Stored Effects," and U.S. Patent No. 8,773,356: "Method and Apparatus for Providing Tactile Sensations"

The complaints also assert infringement by the iPhone 6s and iPhone 6s Plus of the following Immersion patent: U.S. Patent No. 8,659,571: "Interactivity Model for Shared Feedback on Mobile Devices"

It's safe to say that Apple will take up this infringement battle with everything they have. Apple was first to introduce touch displays with their advanced touch centric iOS in the revolutionary iPhone and more recently reinvented touch by introducing 3D Touch that has no equal. So stay tuned because something tells me that Apple is going to respond very sharply, very soon.

Should important details arise in the actual patent infringement documents filed with the court, Patently Apple will promptly post a follow-up report in the days ahead.