With the stock market a little jittery out there of late, some financial houses are busy trying to drum up business for Apple's stock. This morning, a financial industry analyst over at Baird's offered up the results of the firm's latest survey of U.S. consumers which they think shows "directionally positive" interest among potential buyers for this year's iPhone 7. William Power, who holds an Outperform rating on Apple shares with $130 price target, stated in a report that "Overall, 7% of survey respondents claimed they planned to purchase the iPhone 7, up from 4% two years ago in advance of the iPhone 6 (which included the first bigger screen)." 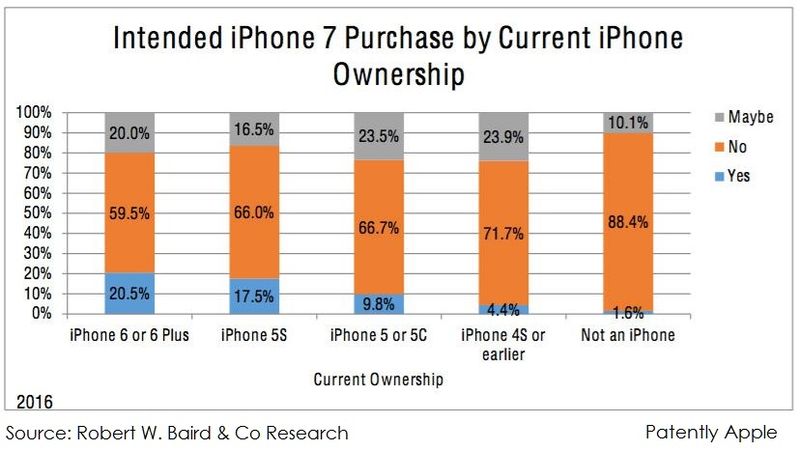 Regarding methodology, Power wrote that "We conducted an online survey that should be demographically representative, and includes 1,000 responses in the U.S."

The numbers in Baird's chart were actually surprising in that 20.5% of current iPhone 6 or 6-Plus owners are considering an upgrade to the iPhone 7 – the largest of any group. That's higher than those with an iPhone 5s or even an iPhone 5. That tells us that there's a growing die hard core base that wants the latest and greatest every two years and that should be a great start to power the sales of iPhone 7 to new highs for Q4 2016.

Growing that core base is the power behind the iPhone brand and testament to user satisfaction which CEO Tim Cook noted during their financial conference call last month. Specifically, Cook stated that "First and foremost, our customer satisfaction and retention rates are second to none and provide us with a long lasting foundation. For example, we think consumer surveys done by 451 Research, formerly known as ChangeWave, measured an incredible 99 percent customer satisfaction rate for iPhone 6s and 6s plus ..." They also indicate that our iPhone loyalty rate is almost twice as strong as the next highest brand."