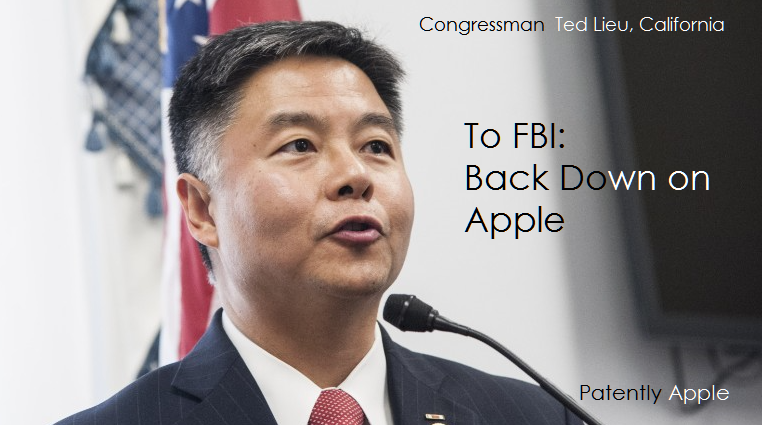 It's being reported this afternoon that Congressman Ted Lieu, a Democratic member of the United States House of Representatives, representing California's 33rd congressional district of California, has asked the FBI to drop its legal attack on Apple. In a formal letter to FBI Director James Comey on Tuesday, the congressman said the FBI is trying to use federal courts to seek an authority it doesn't have: pressuring an American company to weaken the security of its technology.

Lieu was responding to a Lawfare Institute blog post from the FBI director on Sunday that said that this debate over privacy and safety "should not be resolved by corporations that sell stuff for a living."

CNNMoney revealed that Lieu's Letter stated the following: "We should all take a deep breath and talk to each other, rather than use a lawsuit to circumvent the critical and necessary policy discussions. The profound issues at stake should not be decided … by either corporations or the FBI," he wrote. Let Congress, stakeholders, and the American people debate and resolve these difficult issues, not unelected judges based on conflicting interpretations of a law passed 87 years before Alexander Graham Bell invented the telephone."

The report further noted that "Congress is currently considering various proposals on secure technology that can't be hacked or spied on. Lieu's own bill, the Encrypt Act, would prevent the government from mandating weaker security whereas U.S. Sen. Dianne Feinstein is working with Sen. Richard Burr on legislation that would require companies to work with law enforcement in all cases."