Now that Apple has filed a motion to vacate a judge's order compelling them to create software that will assist the FBI in accessing data on a terrorist's iPhone, we may witness some fireworks during next week's House Judiciary Committee hearing titled 'The Encryption Tightrope: Balancing Americans' Security and Privacy.' Apple's Senior VP and general counsel Bruce Sewell and FBI director James Comey will be among those making an appearance as noted below. 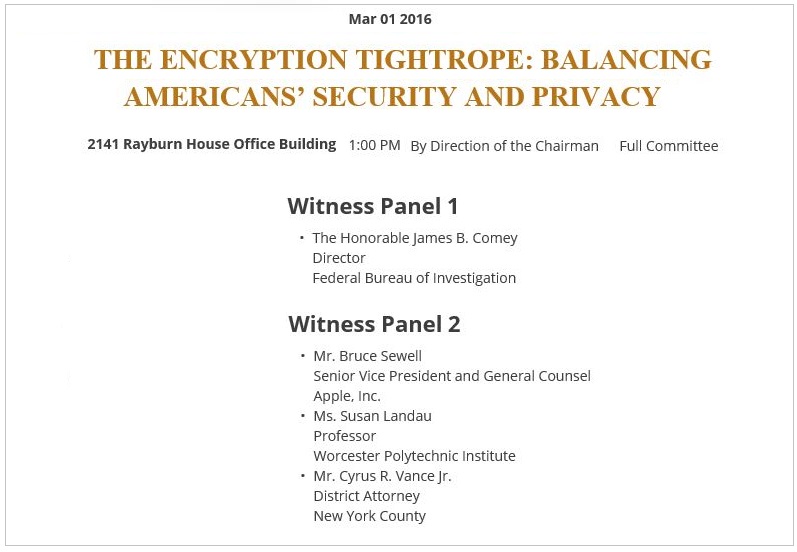 House Judiciary Committee Chairman Bob Goodlatte (R-Va.) and Ranking Member John Conyers (D-Mich.) stated in a joint statement that "The widespread use of strong encryption has implications both for Americans' privacy and security. As technology companies have made great strides to enhance the security of Americans' personal and private information, law enforcement agencies face new challenges when attempting to access encrypted information. Americans have a right to strong privacy protections and Congress should fully examine the issue to be sure those are in place while finding ways to help law enforcement fight crime and keep us safe.

Apple's CEO stated yesterday that "if there's going to be a law, then it should be done out in the open for people so their voices are heard from their representatives from congress." ABC News anchor David Muir then asked Cook, "And if Congress decided that there's this small category, this was a terrorist's iPhone, if Congress decided that, the American people signed off on that, you'd entertain it? Cook: "Let me clear. At the end of the day, we have to follow the law - just like everybody else. So we have to follow the law."