Apple's Legal Motion: The 'All Writs Act' doesn't give the Court a Roving Commission to Conscript and Commandeer Apple 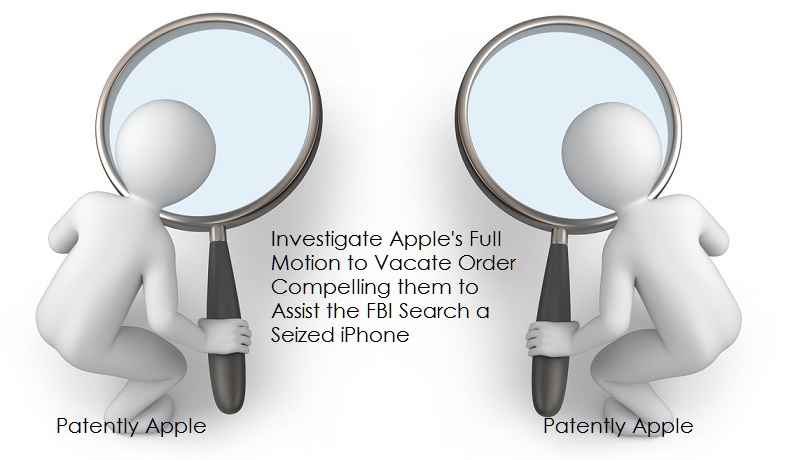 Yesterday afternoon we briefly reported that Apple had filed a motion to vacate a California judge's order compelling them to create software that would allow FBI agents to access an iPhone used in the San Bernardino, California, terrorist attack. In today's report we present you with Apple's full introductory statement along with a copy of their actual Motion filing for those who wish to delve further into every point that Apple's legal counsel has made with a magnifying glass.

The following is Apple's full Introductory statement that was found in their 2/25/2016 Motion filed in California yesterday titled "Apple Inc's Motion to Vacate Order Compelling Apple Inc. to Assist Agents in Search, and Opposition to Government's Motion to Compel Assistance:" All highlighting effects noted below were created by Patently Apple for emphasis only.

This is not a case about one isolated iPhone. Rather, this case is about the Department of Justice and the FBI seeking through the courts a dangerous power that Congress and the American people have withheld: the ability to force companies like Apple to undermine the basic security and privacy interests of hundreds of millions of individuals around the globe. The government demands that Apple create a back door to defeat the encryption on the iPhone, making its users' most confidential and personal information vulnerable to hackers, identity thieves, hostile foreign agents, and unwarranted government surveillance.

The All Writs Act, first enacted in 1789 and on which the government bases its entire case, "does not give the district court a roving commission" to conscript and commandeer Apple in this manner. Plum Creek Lumber Co. v. Hutton, 608 F.2d 1283, 1289 (9th Cir. 1979). In fact, no court has ever authorized what the government now seeks, no law supports such unlimited and sweeping use of the judicial process, and the Constitution forbids it.

Since the dawn of the computer age, there have been malicious people dedicated to breaching security and stealing stored personal information. Indeed, the government itself falls victim to hackers, cyber-criminals, and foreign agents on a regular basis, most famously when foreign hackers breached Office of Personnel Management databases and gained access to personnel records, affecting over 22 million current and former federal workers and family members.1 In the face of this daily siege, Apple is dedicated to enhancing the security of its devices, so that when customers use an iPhone, they can feel confident that their most private personal information—financial records and credit card information, health information, location data, calendars, personal and political beliefs, family photographs, information about their children—will be safe and secure. To this end, Apple uses encryption to protect its customers from cyber-attack and works hard to improve security with every software release because the threats are becoming more frequent and sophisticated. Beginning with iOS 8, Apple added additional security features that incorporate the passcode into the encryption system. It is these protections that the government now seeks to roll back by judicial decree.

There are two important and legitimate interests in this case: the needs of law enforcement and the privacy and personal safety interests of the public. In furtherance of its law enforcement interests, the government had the opportunity to seek amendments to existing law, to ask Congress to adopt the position it urges here. But rather than pursue new legislation, the government backed away from Congress and turned to the courts, a forum ill-suited to address the myriad competing interests, potential ramifications, and unintended consequences presented by the government's unprecedented demand. And more importantly, by invoking "terrorism" and moving ex parte behind closed courtroom doors, the government sought to cut off debate and circumvent thoughtful analysis.

The order demanded by the government compels Apple to create a new operating system—effectively a "back door" to the iPhone—that Apple believes is too dangerous to build. Specifically, the government would force Apple to create new software with functions to remove security features and add a new capability to the operating system to attack iPhone encryption, allowing a passcode to be input electronically. This would make it easier to unlock the iPhone by "brute force," trying thousands or millions of passcode combinations with the speed of a modern computer. In short, the government wants to compel Apple to create a crippled and insecure product. Once the process is created, it provides an avenue for criminals and foreign agents to access millions of iPhones. And once developed for our government, it is only a matter of time before foreign governments demand the same tool.

The government says: "Just this once" and "Just this phone." But the government knows those statements are not true; indeed the government has filed multiple other applications for similar orders, some of which are pending in other courts. And as news of this Court's order broke last week, state and local officials publicly declared their intent to use the proposed operating system to open hundreds of other seized devices—in cases having nothing to do with terrorism.

If this order is permitted to stand, it will only be a matter of days before some other prosecutor, in some other important case, before some other judge, seeks a similar order using this case as precedent. Once the floodgates open, they cannot be closed, and the device security that Apple has worked so tirelessly to achieve will be unwound without so much as a congressional vote. As Tim Cook, Apple's CEO, recently noted: "Once created, the technique could be used over and over again, on any number of devices. In the physical world, it would be the equivalent of a master key, capable of opening hundreds of millions of locks—from restaurants and banks to stores and homes. No reasonable person would find that acceptable." Declaration of Nicola T. Hanna ("Hanna Decl."), Ex. D [Apple Inc., A Message to Our Customers (Feb. 16, 2016)].

Despite the context of this particular action, no legal principle would limit the use of this technology to domestic terrorism cases—but even if such limitations could be imposed, it would only drive our adversaries further underground, using encryption technology made by foreign companies that cannot be conscripted into U.S. government service—leaving law-abiding individuals shouldering all of the burdens on liberty, without any offsetting benefit to public safety. Indeed, the FBI's repeated warnings that criminals and terrorists are able to "go dark" behind end-to-end encryption methods proves this very point. See Hanna Decl. Ex. F [FBI, Operational Technology, Going Dark Issue (last visited Feb. 23, 2016) ("FBI, Going Dark")].

Finally, given the government's boundless interpretation of the All Writs Act, it is hard to conceive of any limits on the orders the government could obtain in the future. For example, if Apple can be forced to write code in this case to bypass security features and create new accessibility, what is to stop the government from demanding that Apple write code to turn on the microphone in aid of government surveillance, activate the video camera, surreptitiously record conversations, or turn on location services to track the phone's user? Nothing.

"Democracies resolve such tensions through robust debate. . . . It may be that, as a people, we decide the benefits [of strong encryption] outweigh the costs and that there is no sensible, technically feasible way to optimize privacy and safety in this particular context, or that public safety folks will be able to do their job well enough in the world of universal strong encryption. Those are decisions Americans should make, but I think part of my job is [to] make sure the debate is informed by a reasonable understanding of the costs."

The government, by seeking an order mandating that Apple create software to destabilize the security of the iPhone and the law-abiding citizens who use it to store data touching on every facet of their private lives, is not acting to inform or contribute to the debate; it is seeking to avoid it.

Apple strongly supports, and will continue to support, the efforts of law enforcement in pursuing justice against terrorists and other criminals—just as it has in this case and many others. But the unprecedented order requested by the government finds no support in the law and would violate the Constitution. Such an order would inflict significant harm—to civil liberties, society, and national security—and would preempt decisions that should be left to the will of the people through laws passed by Congress and signed by the President. Accordingly, the Court should vacate the order and deny the government's motion to compel.

Patently Apple - Apple Motion to Vacate Order Compelling Them to Assist the FBI in Searching a Seized iPhon...