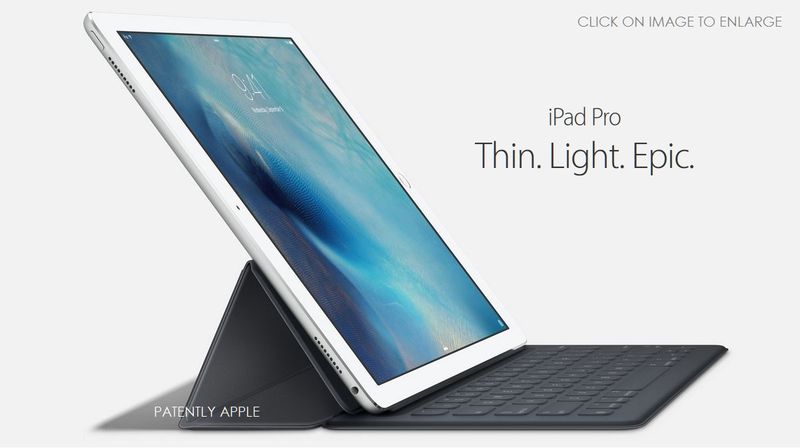 Today IDC reports that despite the holiday season, the worldwide tablet market declined yet again in the fourth quarter of 2015 (4Q15) with 65.9 million units shipped, down -13.7% year over year. Total shipments for 2015 were 206.8 million, down -10.1% from 230.1 million in the prior year. Apple's reign as market leader continued in 4Q15 though the company faced a -24.8% year-over-year decline. Yet the surprising detail that was found buried within the IDC report was that the iPad Pro actually ended up being the top 'Detachable' or 2-in-1 device in Q4 2015. 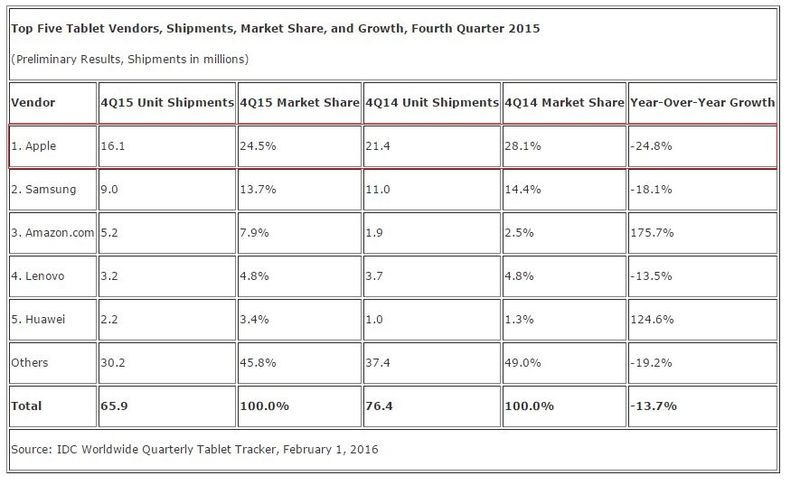 IDC notes that "With the successful launch of the iPad Pro, the company was able to curb the decline in iPad revenues as its model mix shifted towards higher priced iPads.

Despite the market's negative trajectory overall, shipments for detachable tablets reached an all-time high of 8.1 million devices. The transition towards detachable devices appears to be in full swing as pure slate tablets experienced their greatest annual decline to date of -21.1%. On the other hand, detachable tablets more than doubled their shipments since the fourth quarter of last year.

"This quarter was unique as we had new detachables in the market from all three of the major platform players," said Jitesh Ubrani, Senior Research Analyst with IDC's Worldwide Quarterly Mobile Device Trackers. "Despite lukewarm reviews, the iPad Pro was the clear winner this season as it was the top selling detachable, surpassing notable entries from Microsoft and other PC vendors."

I think that Microsoft being unable to even get on the top 5 list for tablets and/or detachables at this stage of the game is really a sad story to itself in that it has to be seen as a failure for Microsoft entering the hardware business. While the tide may turn one day, we have to remember that Microsoft introduced their first Surface tablets way back on June 18, 2012. That's over three and half years ago and their shipments weren't even able to crack the 2.2 million market in the all-important holiday quarter isn't a good sign no matter how you slice and dice the data. And to kick start the year the news didn't get any better.

Last week we posted a report titled "Microsoft Scurries to Blame the Network not the Surface Tablet for a Major Snafu during Sunday's AFC Championship Game." That kind of high profile problem involving the Surface tablet is another kick in the head, even if they tried to blame the network. If it was the network, then why was the problem with one team?

The IDC report went on to stated that "It's also important to note that the transition towards detachable tablets has presented positive opportunities for both Apple and Microsoft. However, Google's recent foray into this space has been rather lackluster as the Android platform will require a lot more refinement to achieve any measurable success."

Perhaps the most interesting trend to note is that prices on slate tablets have not yet hit rock bottom. Amazon's $50 (or $42 for bulk shoppers) tablet was the holiday season's surprise hit, garnering the number 3 rank among the worldwide top 5." Of course there likely no profits from such price butchering, but it sure looks good on paper as a volume device for Wall Street.

Jean Philippe Bouchard, Research Director, Tablets at IDC noted for the report that "One of the biggest reasons why detachables are growing so fast is because end users are seeing those devices as PC replacements. We believe Apple sold just over two million iPad Pros while Microsoft sold around 1.6 million Surface devices, a majority of which were Surface Pro and not the more affordable Surface 3. With these results, it's clear that price is not the most important feature considered when acquiring a detachable – performance is."

In the big picture, keep that last statistic in perspective. While Microsoft's Surface was close to Apple's iPad Pro on the 'detachable' side of the tablet equation, on the standalone tablet side of the equation, the score was iPad 14 million, Surface ... zero.