VoIP-Pal.com Inc. (VPLM) is a publicly traded corporation incorporated in December of 1997 in the State of Nevada and headquartered in Bellevue, Washington. In 2013, VoIP-Pal acquired Digifonica International in order to fund, co-develop and complete Digifonica's patent suite. Two of Digifonica's patents are now being used to sue Apple with for patent infringement. The focus of the case is on Apple's iMessage app and Wi-Fi calling feature.

The Nature of the Action

According to VoIP-Pal's formal complaint before the court, they lay out the 'Nature of the Action' as follows:

VPLM is a technical leader in the broadband Voice-over-Internet Protocol ('VoIP') market with the ownership and development of a portfolio of leading edge VoIP patent applications.

VPLM's patents represent fundamental advancements to the prior art of Internet Protocol ("IP") communication, including improved functioning, routing and reliability for VoIP, messaging, and IP transmission of video, photographs and mixed media. 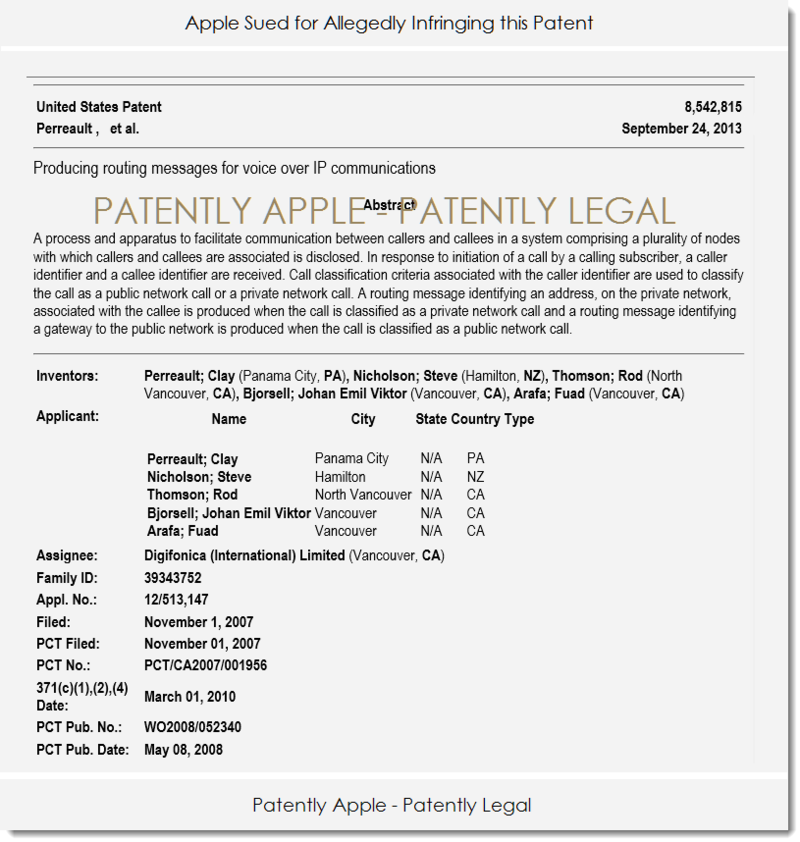 In this section, VoIP states that "Apple supports and operates messaging, including iMessage, an instant messaging service supported by Apple's Messages application that allows smartphone and desktop users to send messages including text, images, video and audio to other users. Apple's messaging, including the iMessage application, runs on Apple desktop computers, laptops, tablets and mobile devices running OS X, iOS and watchOS operating systems. Apple directly and/or indirectly practices certain claims of the 8,542,815 patent (the '815 patent) by utilizing a caller dialing profile comprising a plurality of calling attributes to form network classification criteria to support its messaging systems.

The Apple Messaging System allows devices to initiate a communication between a caller, or a first participant, and a callee, or a second participant, which may be an Apple subscriber or a non-subscriber. A profile that includes attributes is used as part of the process that classifies a communication that directly and/or indirectly practices certain claims of the '005 patent.

Apple manufactures and supports devices related to a calling platform ("Apple WiFi Calling") that includes Apple desktop computers, laptops, tablets and mobile devices, software applications running on such devices and servers operated by wireless carriers that allow calls to be placed over WiFi networks. Apple induces the infringement of certain claims of the '815 patent

Apple WiFi Calling allows an Apple device to initiate a call between a caller and a callee using a carrier assisted voice over IP ("VoIP") system and the callee may be a subscriber of the carrier or a non-subscriber. A profile that includes calling attributes is used as part of the process that classifies a call.

Apple also supports WiFi Calling on desktop computers, laptops, tablets and mobile devices. In the case of WiFi Calling, an Apple device initiates a call between a caller and a callee using a carrier based VoIP system. The callee may be a subscriber of the carrier or a non-subscriber. Apple directly and/or indirectly practices certain claims of the '815 patent by utilizing a caller dialing profile comprising a plurality of calling attributes to form network classification criteria to support its WiFi calling system."

In this section, VoIP states that "Apple's infringement of the '815 patent and the '005 patent provides Apple with unique functionality for its products at the expense of VPLM's protected intellectual property. Rather than innovate and develop its own technology for it classification and routing of Public to Public telephony, Private to Private telephony, Public to Private and Private to Public telephony, messaging and media transfers, Apple has employed VPLM's technology, including its routing and classification systems.

Apple continues to choose to infringe VPLM's patent rights through its caller attribute classification and routing systems, including at least Apple's Messaging and WiFi communication services.

Apple has not obtained permission or a license from VPLM to use its inventions as identified in the '815 patent and the '005 patent."

In closing, VoIP notes that "as an active participant in the communications industry, Apple had constructive notice of the patents at the time of the publication of the parent '815 patent on May 8, 2008.

VPLM is informed and believes, and on that basis alleges, that Apple has increased profits by virtue of its infringement of the '815 patent and the '005 patent. The portion of such increased profits attributable to the incremental value of the infringed property, based upon information and belief, is alleged to be two billion, eight hundred and thirty-six million, seven hundred and ten thousand, and thirty one dollars ($2,836,710,031) based upon," their calculations. They use that multi-billion dollar figure to press the point that Apple's alleged patent infringement was longstanding and 'willful', a legal term that translates into wanting the court to grant them treble damages should the court find Apple guilty.

The patent infringement case presented in today's report was filed yesterday in the Nevada District Court, Las Vegas Office. At present, no Judge has been assigned to the case.