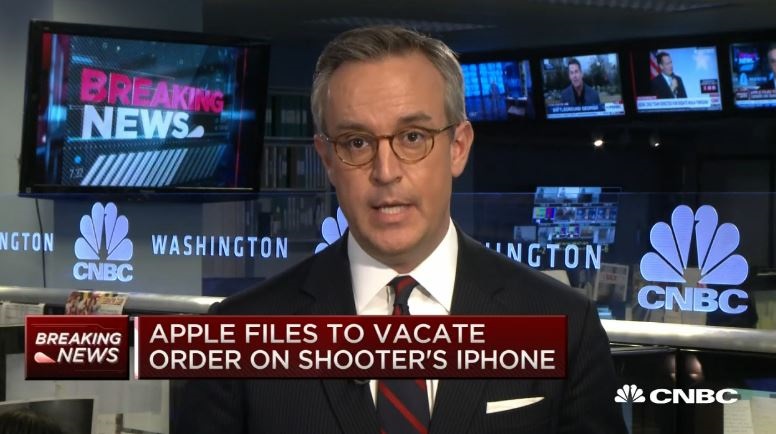 CNBC reports this afternoon that "Apple filed a motion on Thursday to vacate a California judge's order compelling the company to create software that would allow FBI agents to access an iPhone used in the San Bernardino, California, terrorist attacks.

'No court has ever granted the government power to force companies like Apple to weaken its security systems to facilitate the government's access to private individuals' information,' the tech giant said in a release.

On the First Amendment, Apple said that being forced to write a new set of code reflecting the government's opinion of privacy (not the company's) constitutes a violation of its rights against compelled speech and viewpoint discrimination; an argument that we reported on yesterday.

Apple also said the demand violates its Fifth Amendment right to be free from arbitrary deprivation of liberties "in that it would conscript Apple to develop software that undermines the security mechanisms of its own products," the company said in a fact sheet about the motion.

In a conference call with reporters, Apple executives contended that the government is asking the court to order the company to do something that has not been authorized by Congress — something that the Department of Justice and the executive branch has shied away from."

In related news, Engadget reports that the "The tech industry support is beginning to coalesce around Apple in its fight with the FBI. Microsoft's President and Chief Legal Officer, Brad Smith, announced on Thursday that his company would file an amicus brief to support its long-time rival. Smith also renewed calls for congressional hearings to form new legislation that would better balance user privacy concerns with law enforcement and national security needs."

As Apple filed its response in a California federal court, FBI Director James Comey told a House panel that he did not 'fully understand' Apple's opposition in the San Bernardino case.

'This is a single phone in a very important investigation,' Comey said, adding that the government request was narrowly tailored and did not threaten the privacy of other Apple customers. 'I'm a big fan of privacy; I love encryption…But if we get to a place in American life where certain things are immune from a judge's order, then we are in a very different world.''

Comey said federal investigators were obligated to pursue every lead in the San Bernardino case to determine if others, perhaps unknown to authorities, may have been involved and to account for every moment of the terrorist's activities before and after the December attack. Authorities still have been unable to fully account for 19 minutes of the terrorists' movements following the deadly mass shooting and before they killed in a shootout with law enforcement.

'We ought to be fired in the FBI, if we didn't pursue that lead'' he said.

Several lawmakers encouraged Comey to continue his pursuit of Apple's cooperation, including Rep. David Jolly, R-Fla., who thanked the FBI director during his appearance before the House Appropriations Committee.

'Apple's leadership,'' the congressman said, 'risks having blood on their hands.' You could read more on this including more on Apple's three main arguments here.