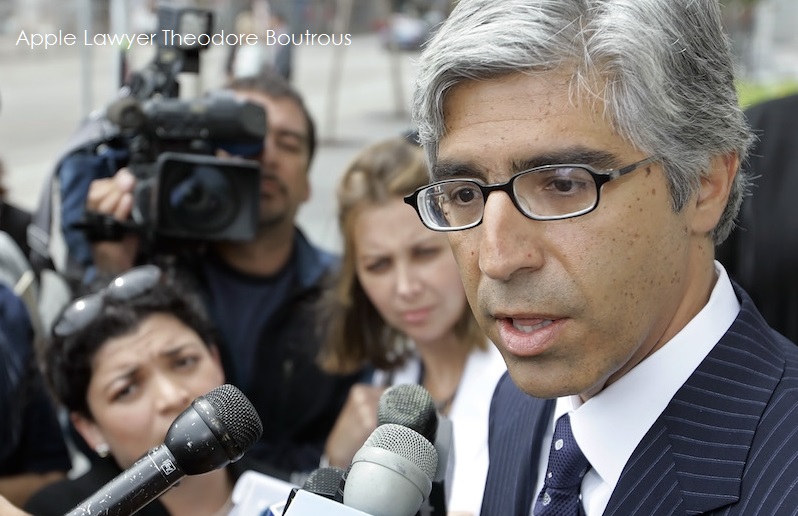 Last week Patently Apple posted a report titled "Tim Cook's Decision to go to War with the Government will now veer into a Legal Argument over Free Speech." The report noted that Apple would likely seek to invoke the United States' protections of free speech as one of their key legal arguments in trying to block an order to help unlock the encrypted iPhone of one of the San Bernardino shooters. Late yesterday the Los Angeles Times confirmed that Apple will indeed pursue this legal tactic.

The L.A. Times reports that "In Apple's fight to knock down a court order requiring it to help FBI agents unlock a killer's iPhone, the tech giant plans to argue that the judge in the case has overreached in her use of an obscure law and infringed on the company's 1st Amendment rights, an Apple attorney said Tuesday.

As reported last week, Theodore Boutrous who frequently represents media organizations, is one of the marquee lawyers hired by Apple to wage its high-stakes legal battle -- outlined the arguments Apple plans when it responds to the court order this week.

At the heart of Apple's response, Boutrous said, will be an objection to the use of the All Writs Act as the legal basis of the order compelling the company to assist the FBI. The act, which was first passed by Congress in 1789 and updated periodically, is a sweeping legal tool that allows judges to issue orders if other judicial avenues are unavailable.

"The government here is trying to use this statute from 1789 in a way that it has never been used before. They are seeking a court order to compel Apple to write new software, to compel speech," Boutrous said in a brief interview with The Times.

Boutrous said courts have recognized that the writing of computer code is a form of expressive activity -- speech that is protected by the 1st Amendment.

"It is not appropriate for the government to obtain through the courts what they couldn't get through the legislative process," he said. That very statement echoes the argument made by California Congressman Ted Lieu yesterday. For more on this story, read the full L.A. Times report here.