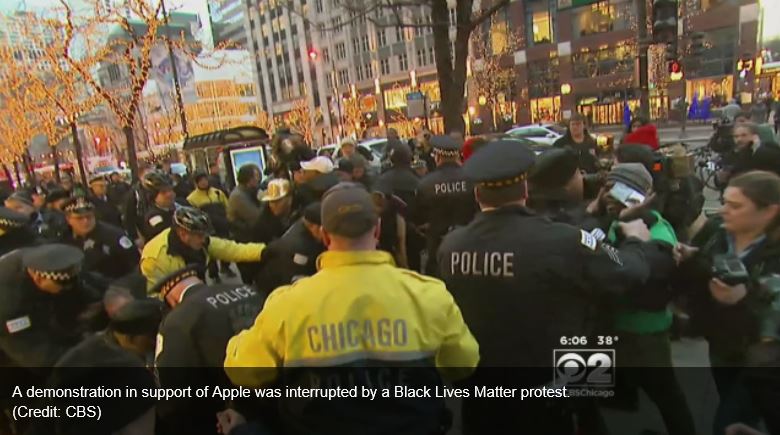 Last week Patently Apple posted a report titled "Protest Group 'Fight for the Future' Schedules Feb. 23 for Mass Protest against the FBI Court Order to hack an iPhone." The protest took place as promised but it was a far cry from being a "mass protest." In fact it was quite anemic. USA Today reports that "The 50-state protest organized to show support for Apple's stand against the FBI appears to have attracted mostly small crowds."

In Chicago, the protest taking place on Chicago's famous Magnificent Mile, an upscale section of Chicago's Michigan Avenue, was rudely and abruptly overrun by the Black Lives Matter Protesters who set an American flag on fire.

The Apple protest was once again only supported by a mere 15 people in front of the Apple Store at 679 N. Michigan, according to CBS Chicago.

It would appear that the protests should have been scheduled for a Saturday so as to have allowed working people and students to join in the protests. The anemic turnout gives the public impression that support for Apple's position against the government's court order is weak.