A Delaware company by the name of Valencell Inc. has filed a patent infringement lawsuit against Apple. Valencell asserts that Apple and Fitbit products infringe on Valencell's intellectual property that is primarily found in four distinct patents presented in our report. According to their website, "Valencell develops high-performance biometric sensor technology and licenses its patent-protected technology to consumer electronics manufacturers, mobile device and accessory makers, sports and fitness brands, gaming companies, and first-responder/military suppliers for integration into their products. Valencell's PerformTek-powered sensor technology is the most accurate wearable biometric sensor technology that continuously measures heart rate and activity." According to Valencell, Apple's Senior Partnership Manager originally met with Valencell to form a partnership but instead used Valencell's technology for the Apple Watch without licensing Valencell's technology. Within Valencell's formal complaint before the Court, they regrettably stated that basically stealing ideas is a "practice consistent with the statement by Apple CEO Steve Jobs that Apple has 'always been shameless about stealing great ideas.'"

The official Valencell complaint before the court states the following in full: "On information and belief, in or around February 2013, Apple assembled a team to develop and/or implement the Apple Watch. At that time, Apple intended to incorporate a heart sensor into the Apple Watch. Around that same time, Liang Hoe, a Senior Partnership Manager at Apple, contacted Valencell regarding a partnership opportunity. Apple expressed an interest in Valencell's heart sensor technology.

On information and belief, in or around August 2013, Apple received PerformTek-Powered products. Between September 2013 and March 2014, Apple conducted detailed testing on these products, including an analysis of the product circuitry.

On information and belief, Apple began shipping the Apple Watch on April 24, 2015. Since at least that date, Apple has sold the Apple Watch in the United States. The Apple Watch contains a heart rate sensor, which it uses to calculate the pulse of the end user.

On information and belief, Apple solicited technical information and know-how from Valencell on the false premise that it wished to license Valencell's PerformTek Technology. Apple did not have an intention of licensing Valencell's PerformTek Technology. Instead, Apple's interaction with Valencell was fueled by a business decision that the benefits of infringing upon Valencell's patented technology outweigh the risk of being caught and ultimately forced to pay damages. This practice is consistent with the statement by Apple CEO Steve Jobs that Apple has 'always been shameless about stealing great ideas.' Further, Apple is knowingly using Valencell's patented technology in an effort to achieve a licensing rate that is below a reasonable royalty."

The Four Patents Presented in this Case 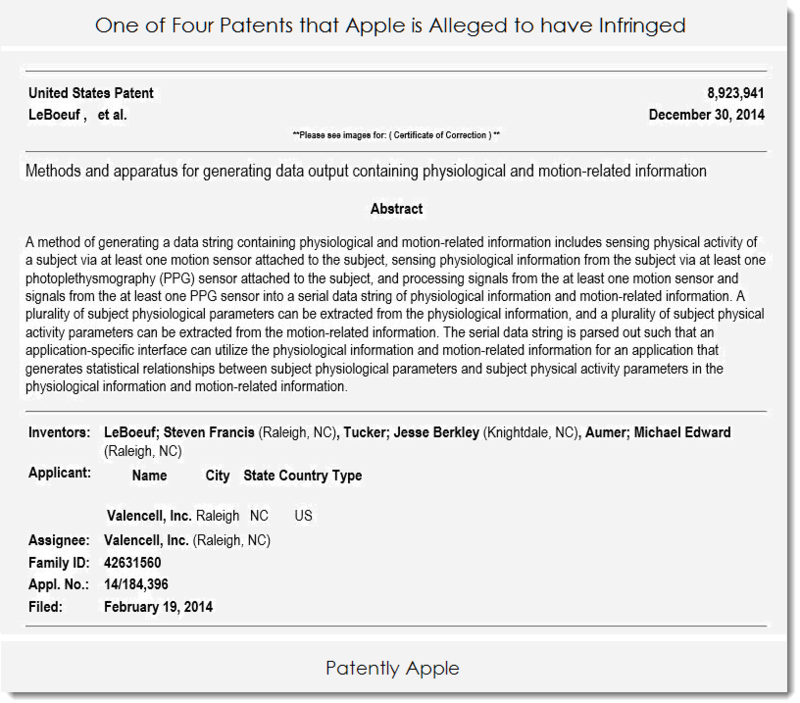 Valencell has been damaged as a result of Apple's infringing conduct described in this Count. Apple is, thus, liable to Valencell in an amount that adequately compensates Valencell for Apple's infringements, which, by law, cannot be less than a reasonable royalty …"

Other Counts against Apple

Beyond the four patents noted above, Valencell filed several other counts against Apple including "Breach of Contract" (Counts 5,6 &7) and "Unfair and Deceptive Trade Practices/Unfair Competition" in Count 8.

The patent infringement case presented in today's report was filed in the North Carolina Eastern District Court. The Presiding Judge in this case is noted as being Judge James C. Dever. Beyond the formal complaint noted in our report, you could also review Valencell's formal press release here.