Top Tech Companies Take their Battle over Encryption to Davos 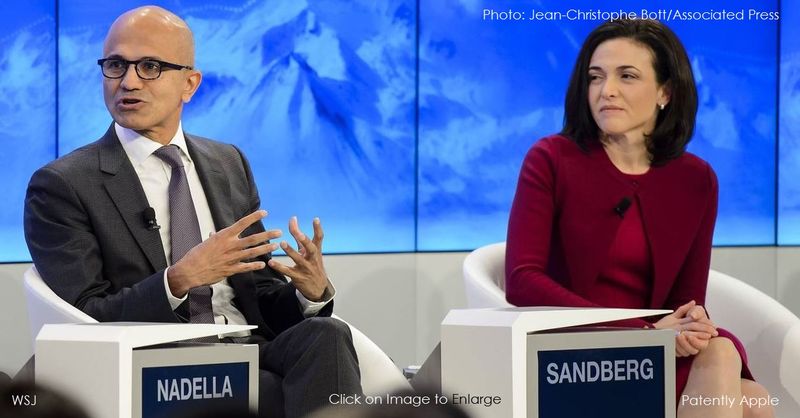 A new report this afternoon states that tensions are now rising between governments and big U.S. technology companies over widening surveillance demands, part of a broader debate over how to reconcile online privacy with the fight against terrorism. The battle resurfaced today at the World Economic Forum, after a year in which terrorist groups including Islamic State killed hundreds in attacks around the world—in some cases, officials say, using popular online tools to recruit followers and communicate. The photo above shows Microsoft's CEO Satya Nadella and Facebook's COO Sheryl Sandberg sitting on a panel on this subject in Davos, Switzerland.

The Wall Street Journal reports today that surveillance demands are rising sharply. Governments and law-enforcement agencies in the European Union made nearly 63,000 requests for information about users to Microsoft, Google, Apple, Facebook and Twitter in the first half of 2015, up 24% from a year earlier.

The pressure goes beyond the EU. In Turkey, government requests for user data from Facebook rose 141% in the first half of 2015, from the year before. In Russia, requests for user information from Google rose 122% in the same period. 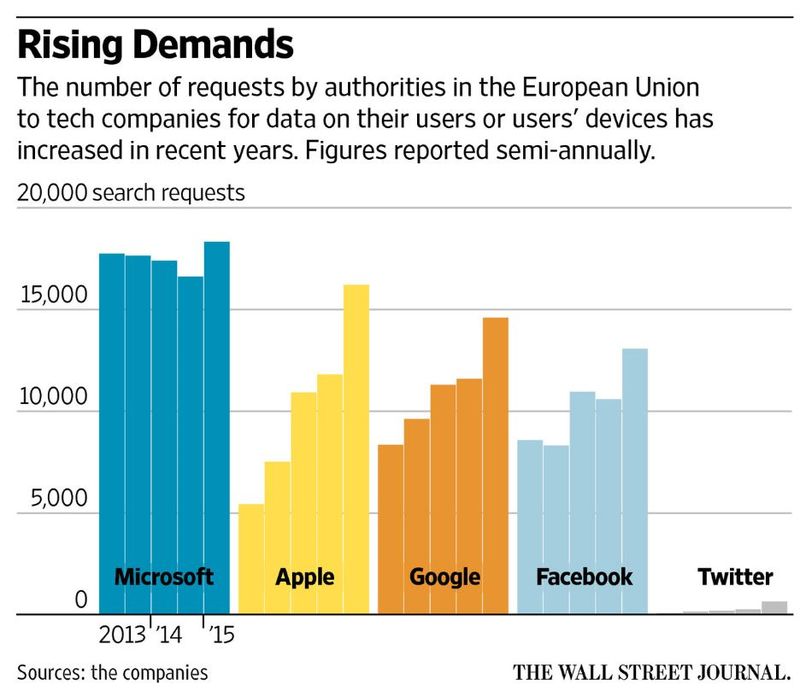 Governments, particularly in Europe, want U.S. tech firms to turn over more information to them directly. Law-enforcement and intelligence officials say firms should build ways to turn over conversations into encrypted chat programs like Facebook's WhatsApp.

Tech firms respond that weakening encryption could damage security on the Internet, and say new laws demanding access would put them in an impossible position.

Brad Smith, Microsoft Corp's chief legal officer, who is among the tech executives debating surveillance at Davos stated that "You could be placed in a situation where you have to decide what law to break. It isn't a comfortable place to be."

Firms including Apple and Google have started encrypting mobile phones by default, often in ways that mean the firms don't have keys to decrypt them. So Silicon Valley companies are lobbying officials in Davos. They contend that changing their architecture to thwart encryption would open their systems to hackers—and not stop criminals from building their own end-to-end encryption systems anyway.

Yet telecommunications executives who have had to contend with surveillance requests for some time now and say that the decision should be left to governments. AT&T Chief Executive Randall Stephenson said earlier today that he doesn't "think it is Silicon Valley's decision to make about whether encryption is the right thing to do." For more on this, read the full Wall Street Journal report here.

Other Reports on this Subject