Home Archives Contact Us Subscribe Twitter MeWe Facebook Patently Mobile
The Brits see Apple vs. EU Commission as King Kong vs. Godzilla and they're not quite sure who to cheer on
Fire Struck Foxconn's Main iPhone Plant Sunday 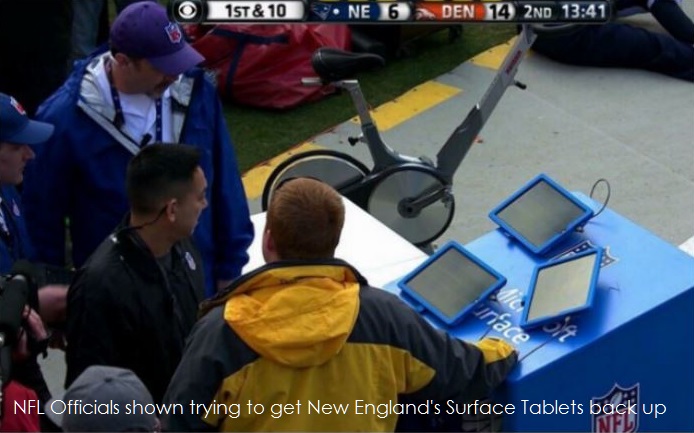 Microsoft suffered another public black eye during the AFC championship game Sunday between the Denver Broncos and New England Patriots, when the tablets on the Patriots' sidelines apparently failed, reports C/Net.

CBS' sideline reporter Evan Washburn reported during the game. "They're having some trouble with their Microsoft Surface tablets. On the last defensive possession the Patriots' coaches did not have access to those tablets to show pictures to their players. NFL officials have been working at it. Some of those tablets are back in use, but not all of them. A lot of frustration that they didn't have them on that last possession."

Microsoft later issued a statement on the issue: "Our team on the field has confirmed the issue was not related to the tablets themselves but rather an issue with the network. We worked with our partners who manage the network to ensure the issue was resolved quickly." I'm sure the Patriots' coaches didn't see it that way.

The tablets malfunctioning caused an uproar online and the story was quickly covered by The Verge, TechRadar, Mashable, CBS Sports and others. A bit of general background on the Surface tablet being adopted by the NFL is covered in the video below.