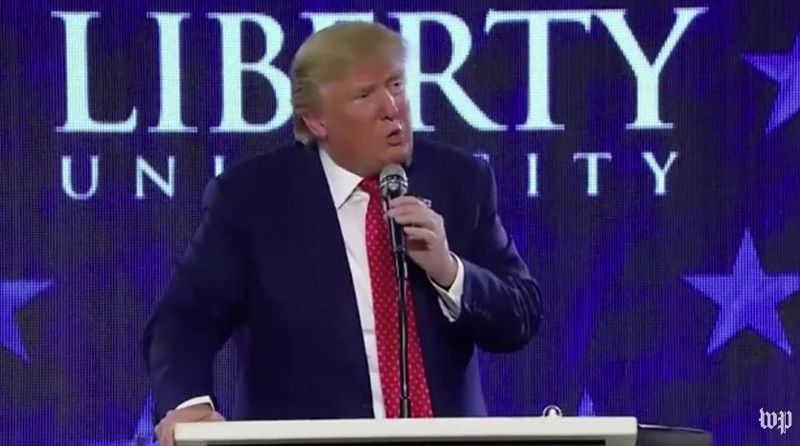 Donald Trump addressing Liberty University students reiterated that if elected President of the U.S. he would force companies like ford to build cars in America and not in Mexico or they'll be heavily taxed. While we've heard that from Trump before, what was new was his view that Apple was going to be in his crosshairs for making more products in the U.S. Trump specifically stated in his closing comments that "We're going to get Apple building their damn computers and things in this country instead of in other countries," as part of his "Make America Great Again!" campaign promises.

Technically speaking Apple has a Texas plant that manufactures a small amount of Apple's high-end Mac Pro's in a high-tech plant though some see it as more of a dog and pony show for Apple to say that they manufacture in the U.S. Cook was pushed on this front recently in a 60 minutes interview with Charlie Rose.

Charlie Rose noted in the 60 minute segment that "Most Americans would be surprised to know that nearly all Apple products are manufactured by one million Chinese workers in the factories of Apple contractors including its largest Foxconn. Yet Tim Cook insists that China's vast and cheap labor force is not the primary reason for manufacturing there." Rose questioning Tim Cook asked him "if it's not wages then what is it?" Cook's response was: "it's skill." Cook added in-part that China also has vastly more tool and die companies.

Forcing American companies to reinvest in the U.S. again and bring back those jobs lost to foreign countries is one of Trump's corner stone promises. Apple shareholders and even perhaps many fans will no doubt heckle Presidential candidate Donald Trump for dragging Apple into the conversation. There may even be some harsh backlash to follow in the coming days.

Though for the angry middle class that is dominating this Presidential election cycle, they're loudly applauding Trump for standing up for badly needed jobs for Americans that don't have college degrees. There's real anger out there against American companies making killer profits while taking their jobs out of the country. And the excuses that are being given by CEO's for taking jobs overseas don't impress anyone outside of Wall Street and shareholders.

Today Donald Trump stepped into the ring and paraded Apple out as one of his targets for bringing more jobs back to America by force if need be. I'm sure this will be topic of conversation for days and months ahead.