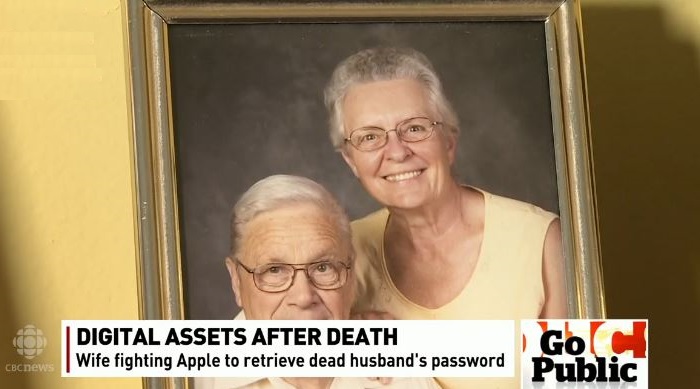 A widow from Victoria, British Columbia, Canada, was outraged over Apple's demand that she obtain a court order to retrieve her dead husband's password so she can play games on an iPad. Evidently a notarized death certificate will allow a widow to obtain a pension, transfer the title to a house, transfer the car but it's not enough for Apple to assist a widow in obtaining her husband's password or access to his iPad.

The daughter then got involved and after many phone calls, writing directly to Apple CEO Tim Cook and a lengthy runaround from Apple she finally got an answer. Apple demanded a court order knowing full well that it would cost the widow hundreds of dollars to do so.

After the 'Go Public' team contacted Apple, it did reach out to the Bush family and apologized for what it called a "misunderstanding," offering to help the family solve the problem — without a court order. At the time of publication, it was working with Donna Bush to do that.

However, although Apple said it was all a big misunderstanding, 'Go Public' asked Apple what its official policy is for customers trying to retrieve the passwords and digital information of family members who have passed away. It said it won't comment.

The Bush family believe Apple has to have a policy on this so that other families won't have to endure what they did.

The CBC report noted that "Daniel Nelson, a Toronto estate lawyer who specializes in digital assets, said Bush's problem is becoming a bigger issue. Nelson said the problem is that while users own the material online for the most part, access to it is controlled by online providers like Apple. Therefore, those companies have the right to set the rules when it comes to accessing what we put online and the content we buy. Yet with that said, Nelson also noted that Apple's demand for a court order seemed a little heavy-handed in Bush's case, especially considering the low monetary value of the Apple account.

He also said "providers need clear policies when it comes to dealing with digital property and access, and Canadian laws need to be clearer about who owns or controls what is put online after someone dies."

This could potentially be a growing issue with elderly customers of Apple's around the world and so we hope that Apple legal will devise a clear policy with very clear and easy to follow steps for customers around the globe that are under different laws. Especially on this Martin Luther holiday, it's perhaps time to go the extra mile to assist the elderly who who are already in a time of sorrow.