Apple introduced iTunes Radio in 2013 and stations were free to listen to (with ads), or ad-free for iTunes Match subscribers. Late yesterday Apple sent out an email alerting customers that iTunes Radio, the company's answer to Pandora, will no longer be free as of January 28th. Apple noted in their message that "All radio stations except for Beats 1 will be available exclusively to Apple Music members" at $9.99/mo.

An Apple spokesperson told BuzzFeed News that "We are making Beats 1 the premier free broadcast from Apple and phasing out the ad-supported stations at the end of January." The move from an ad-supported model follows Apple's recent exit from the advertising business via iAd.

A report by The Verge noted one fan's take on the iTunes Radio announcement as noted below. 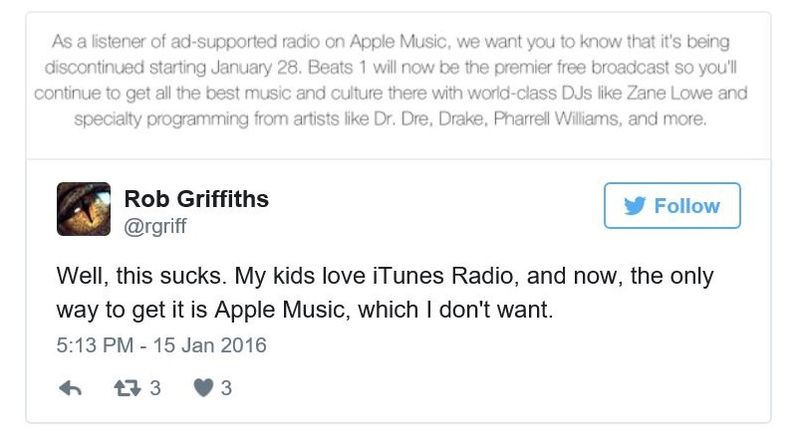 The report further noted that the decision shows that Apple is taking new steps to lure customers into paying for its streaming service as the company engages in a heated war with Spotify. That's the company's primary competitor now — not Pandora.