According to Apple, HomeKit is a framework for communicating with and controlling connected accessories in a user's home. You can enable users to discover HomeKit accessories in their home and configure them, or you can create actions to control those devices. Users can group actions together and trigger them using Siri. So last week's report covered the Siri aspect and today's patent report covers the discovery of accessories and some of the forms that could be a part of the user's home automation app.

Apple's patent filing notes that "At present, it can be difficult for a user to manage multiple electronically controllable devices or systems. For instance, a user's home might have a thermostat, an electronically controllable lighting system, a home security system, and so on. Each such system can be made by a different manufacturer, and each manufacturer may provide a dedicated controller device (e.g., IR-based remote control device) or a controller application program (or 'app') that the user can install and run on a general-purpose device such as a smart phone, tablet, or home computer system. Each controller device or app is typically customized for a particular manufacturer's systems and may not be interoperable with systems from other manufacturers or even with other systems from the same manufacturer. Such a piecemeal approach is not readily scalable. A user seeking to create a 'smart home' environment or the like, with an array of disparate devices that can be centrally controlled or managed, is confronted with the need to accumulate a plethora of controller devices and/or controller apps.

Certain embodiments of the present invention can operate in the context of protocols for communication between a controller device (or 'controller') and any number of other electronic devices that are to be controlled (referred to herein as 'accessory devices' or simply 'accessories'). A controller can be implemented, for example, on a general-purpose computing device such as a desktop computer, laptop computer, tablet computer, smart phone, other mobile phone, other handheld or wearable computing device, by providing the general-purpose computing device with appropriate executable program code; alternatively, a controller can be a special-purpose computing device. An accessory can include any device that is controllable by a controller. Examples of accessories include light fixtures, thermostats, door locks, automatic door openers (e.g., garage door opener), still or video cameras, and so on. Accessories and controllers can communicate with each other via wired or wireless channels using standard transport protocols such as Wi-Fi, Bluetooth, Bluetooth LE, or the like. It is to be understood that other communication protocols and transports can be used.

In some embodiments, a 'uniform' accessory protocol can be provided via which controllers can send command-and-control messages to the accessory and receive responses from the accessory in a uniform format, regardless of the type or functionality of the accessory. For instance, an accessory can be defined as a collection of services, with each service being defined as a set of characteristics, each of which has a defined value at any given time. These characteristics can represent various aspects of the accessory's state. The protocol can define message formats via which a controller can interrogate (e.g., by reading) and update (e.g., by writing) characteristics of an accessory (singly or in groups), thereby allowing the controller to determine and/or change the accessory's state. Accordingly, any type of accessory, regardless of function, can be controlled in a consistent manner.

Apple's patent FIG. 1 shows a home environment; FIG. 3 shows an example of an environment model for an accessory network; FIG. 4 shows a table showing examples of service groups that can be defined. 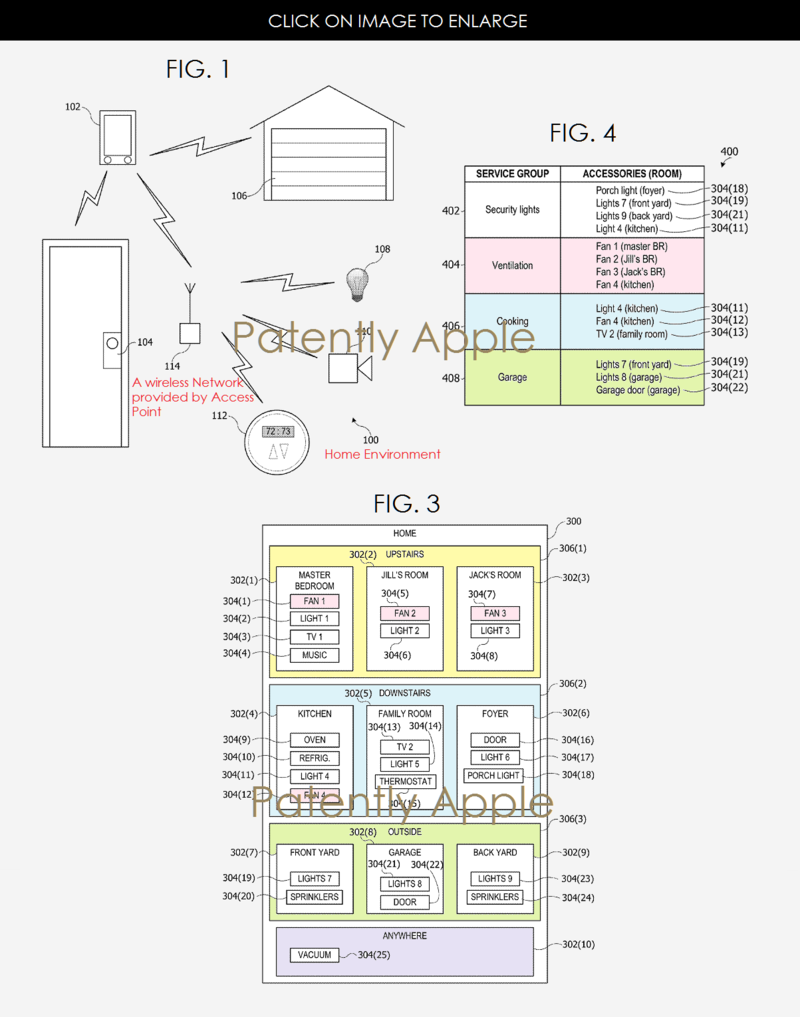 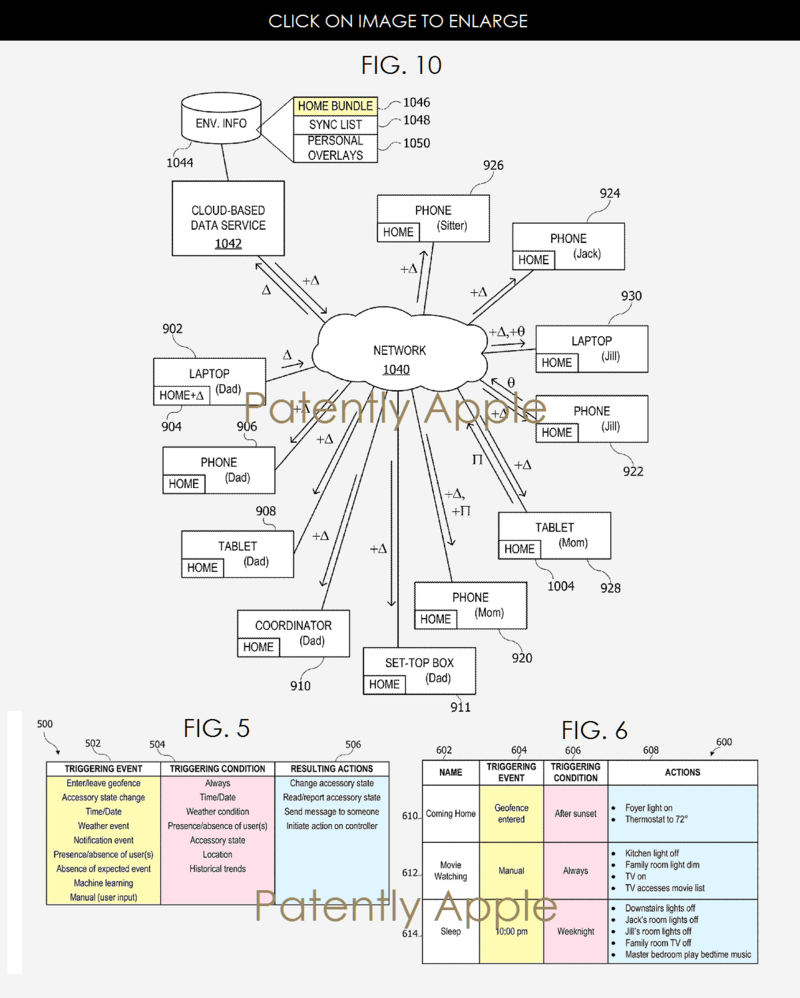 The patent figures below illustrate some of the interfaces that may be associated with a home automation system. 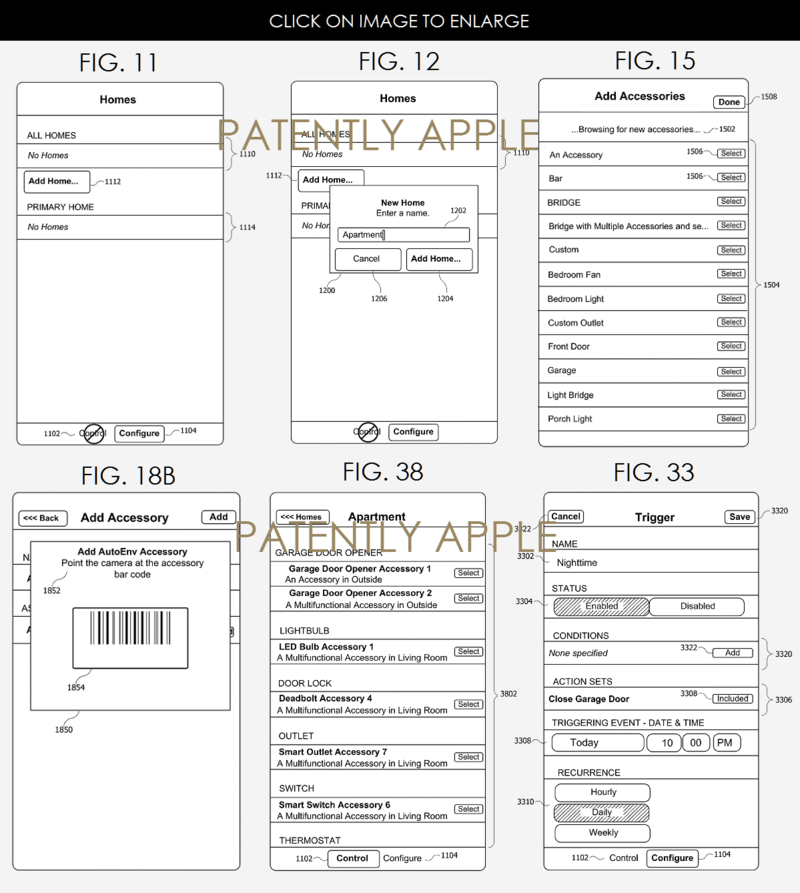 Apple patent application 20150350031 was originally filed in 2014 and it's most current filing being made in May 2015. Considering that this is a patent application, the timing of such a product to market is unknown at this time. The HomeKit graphic below from Apple can be enlarged by clicking on it. 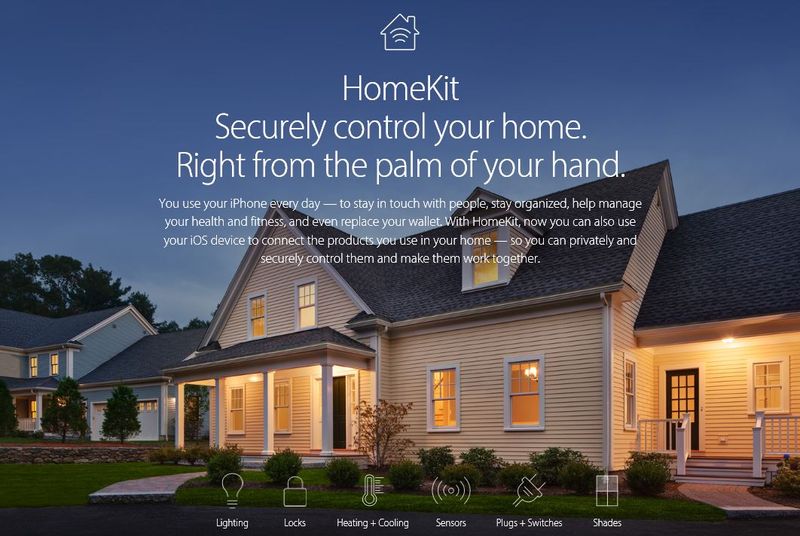