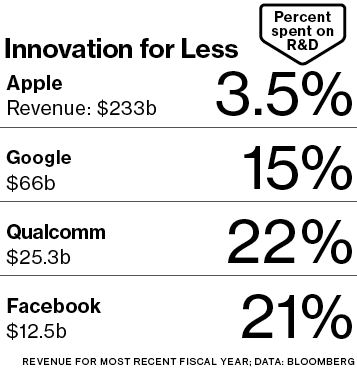 BloombergBusiness notes that "compared with its resources, Apple has remained relatively quiet. It spent just 3.5 percent ($8.1 billion) of its $233 billion in revenue in fiscal 2015 on research and development, a lower percentage than every other large U.S. technology company, data compiled by Bloomberg show. By contrast, Facebook spent about 21 percent ($2.6 billion) on R&D, chipmaker Qualcomm 22 percent ($5.6 billion), and Alphabet 15 percent ($9.2 billion).

One of the biggest investments has been in the proprietary semiconductors at the heart of the iPhone and iPad. The latest A9 chip, built for the iPhone 6S and iPad Pro, is faster than any chip on the market made by leading semiconductor companies.

Horace Dediu, founder of researcher Asymco added that "While other companies make a bigger show of their projects, "Apple's work is in secret. It is substantial and calibrated by market opportunity." For more, read the full BloombergBusiness report.