Last week we posted a patent report titled "Apple Working on waterproofing iDevice Speakers & Microphone." Today, part two of the invention has come to light that provides a new method relating to the expulsion of liquid from iDevice acoustic cavities of an acoustic module. 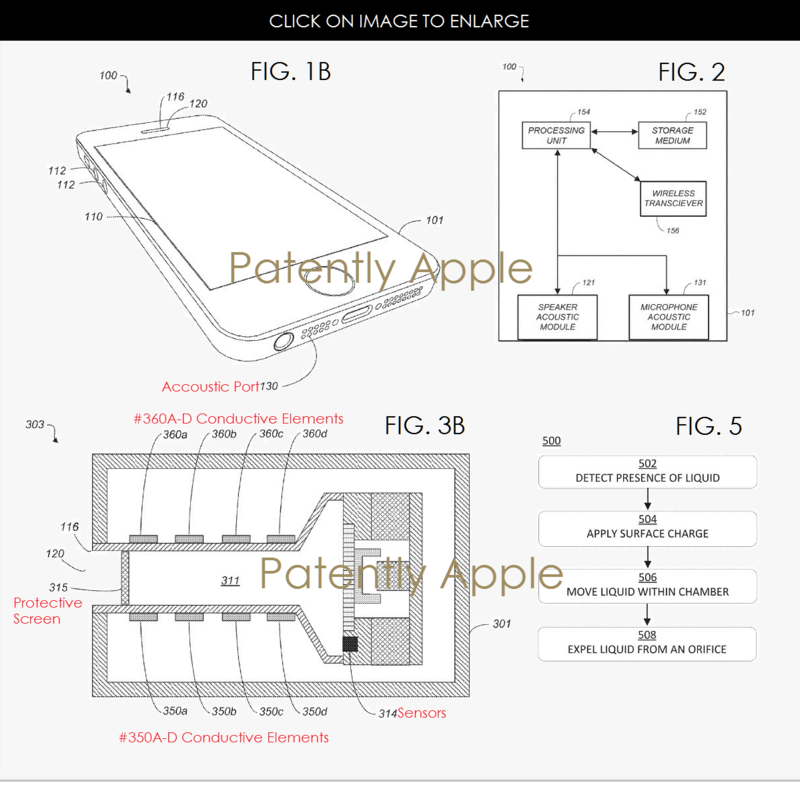 In one example embodiment, the acoustic modules include an acoustic element and a cavity that is acoustically coupled to the acoustic element. The module also includes a first set of conductive elements as noted in patent FIG. 3B above that are configured to generate a first surface charge on a first region of an interior surface of the cavity, and a second set of conductive elements configured to generate a second surface charge on a second region of the interior surface of the cavity.

In some cases, as was mentioned in last week's patent filing, the screen element 315 of FIG. 3B above may be configured with one or more hydrophobic surfaces, such as one or more hydrophobic coatings (such as manganese oxide polystyrene, zinc oxide polystyrene, precipitated calcium carbonate, carbon-nanotubes, silica nano-coating, polytetrafluoroethylene, silicon, and so on).

However, what's clearly new here is that in some cases, Apple notes that a charge may also be selectively applied to the screen to modify the hydrophobic properties of that element. For example, to prevent ingress of water, a negative charge may be applied to the protective screen 315, thereby increasing the hydrophobic properties of the screen 315 and repelling water away from the opening of the acoustic cavity 311.

This kind of test understandably wasn't performed by iFixit in their iPhone 6s teardown. So it's not just that the iPhone 6s acoustic port screen is finer and sprayed with a protective coating, it's also given a negative charge when needed so as to amplify the protection and repelling of water. Whether this twist was added to the current iPhone 6s or is to be applied to a future iPhone is unknown at this time.