Apple has been filing patents and even winning patents for years regarding waterproofing iDevices and their individual components as you could review here: 2012, 2013, 2013 and 2014. In September we posted a report titled "New iFixit Teardown discovers yet another Apple Patent Come to Life," in respect to waterproofing the new iPhone 6s. The iFixit team discovered that Apple was using new waterproof silicon seals on board-to-board connectors. The report pointed to an Apple patent that we covered back in March titled "Apple Invents a Waterproofing Method for Future iDevices using Hydrophobic Conformal Coatings and Silicon Seals." Today, the U.S. Patent & Trademark Office published another waterproofing/water resistant related patent application from Apple titled "Evacuation of Liquid from Acoustic Space" wherein Apple tackles waterproofing methods for iDevice speaker(s) and microphone.

Apple notes in their patent background that in some implementations, various components of such acoustic modules may be made resistant to water and/or other liquids in order to protect sensitive components. However, even when such components are made resistant to liquids, the presence of such liquids may interfere with acoustic operation. For example, the presence of liquid in an acoustic cavity through which acoustic waves must travel either to or from an acoustic membrane may hinder acoustic membrane vibration. Such hindrance may impede proper operation of such an acoustic module even when damage from such liquids is prevented.

Apple's invention that sets out to remedy the problem outlined above covers systems, methods, and apparatuses for evacuating liquid from an acoustic space. 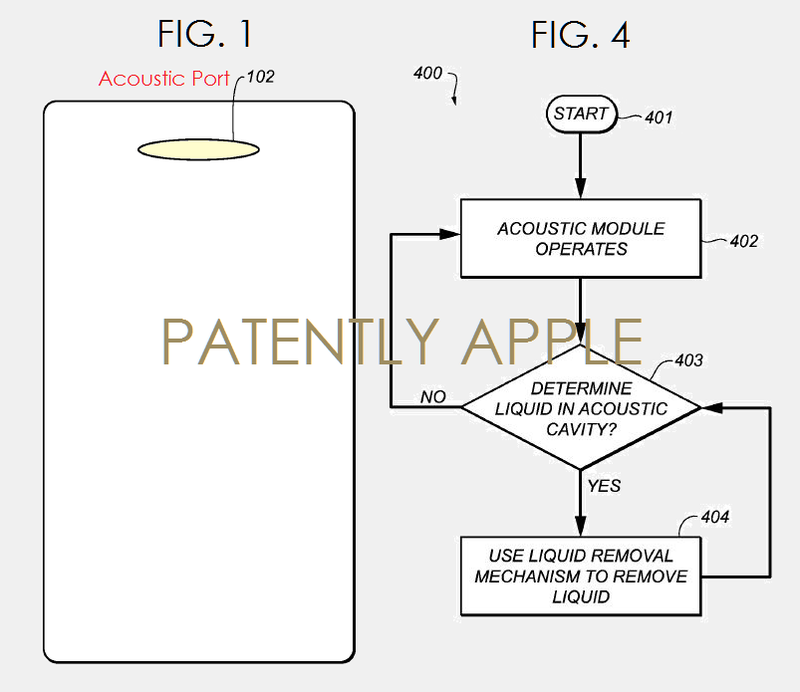 In various implementations of such cases, the produced acoustic signal may be one that was previously produced to successfully force other liquid from the acoustic cavity at a previous time. 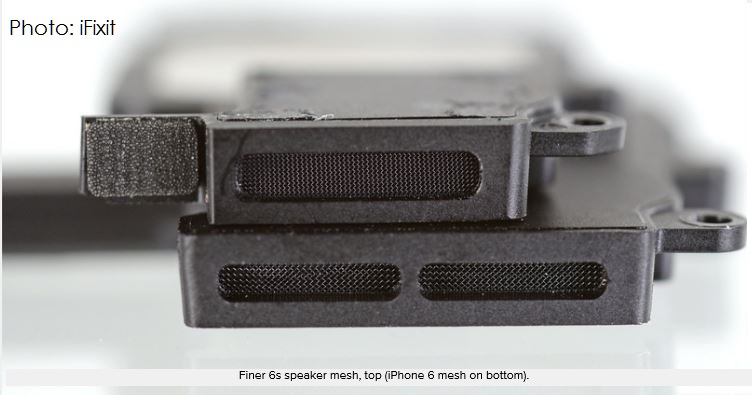 In the iFixit report they noted that "No obvious signs of waterproofing in the speaker or headphone jack, either. The speaker sports a slightly finer mesh weave than that of the iPhone 6, but it doesn't appear to repel water any better—in our tests, both speakers seemed to gulp down liquids at about the same rate."

While the finer mesh would be a part of this invention, it's unknown at this time whether or not Apple chose one of the hydrophobic coatings that they listed in their patent and is presented to you below. Did Apple miss the deadline and simply passed on using a new coating for the speaker mesh or will that aspect of the invention surface on the iPhone 7? I suppose we'll have to wait and see if Apple highlights this feature in their future iPhone-7 literature or read about it in the iPhone-7 iFixit teardown in 2016.

It's always interesting to see Apple continually work on a problem over an expanded time line for things like waterproofing or wireless inductive charging that we reported on earlier today. We noted in a report last week that Phil Schiller revealed that "When we look at creating each new product, one of the great things about the process is the product teams are free to re-imagine a product any way that would make it better. They're not tied to a schedule, to force it into a specific time window, not tied to past definitions of the product."

So when we see groups of inventions relating to one theme or another like we have today and see ideas coming from vastly different angles and approaches, this is Apple trying to find a method to make a product better in the tiniest of ways in every generation of iDevice or Mac. It's this insane attention to detail that makes Apple's products so appealing for those who still appreciate craftsmanship and quality. It's what Steve Jobs brought back to Apple in 1997 and over the years: passion. Passion for whatever they chose to create in the form of devices or services. A driving passion that was sorely absent in the film 'Steve Jobs' by Aaron Sorkin and just one of the many reasons why it bombed at the box office nationwide.