Last week we posted a report titled "Apple's Fourth Inductive Charging Invention in a Month Surfaces," which listed the four recent patent applications that Apple had filed regarding wireless inductive charging. Today, the U.S. Patent & Trademark Office published Apple's fifth inductive charging patent application showing yet another approach that their engineering team is working on. While only time will tell which method Apple will finally choose for a future standalone inductive charger, the intensity of research shows us that it's clearly a priority project.

We noted in a report last week that Phil Schiller revealed that "When we look at creating each new product, one of the great things about the process is the product teams are free to re-imagine a product any way that would make it better. They're not tied to a schedule, to force it into a specific time window, not tied to past definitions of the product."

Schiller's point resonates in this patent application that acknowledges the current problems with inductive charging and how Apple is working to overcome them. Apple notes that "In certain embodiments, a transmit coil and receive coil are substantially annular and oriented to face and be substantially parallel to one another. If misaligned, the power transfer efficiency between the transmit coil and the receive coil decreases substantially. In many circumstances, decreased power transfer efficiency is undesirable. For example, the accessory may receive less power than desired to charge an internal battery at an optimal rate.

To account for imperfectly aligned coils, conventional designs typically increase the power to the transmit coil in order to increase the power received by the accessory. The power lost due to transfer inefficiencies may be dissipated as heat and/or may be absorbed by (or may interfere with) other electronic devices or components nearby.

In other examples, a relatively small misalignment of the transmit and receive coils may only cause a slight decrease in power transfer efficiency. Conventional designs may inform or instruct a user to adjust the positioning of the accessory or dock in order to optimize power transfer efficiency. For example, an accessory may alert the user of imperfect alignment by sound, light, vibration, or by displaying a message on a screen. A user may be frustrated or inconvenienced if required to realign the accessory with the dock.

In still further examples, an accessory may ignore power transfer efficiency losses and instead may charge an internal battery at a lower rate. In these examples, a user may be frustrated or inconvenienced due to inconsistent accessory recharge times.

Accordingly, embodiments described Apple's patent application relate to, include, and take the form of methods and systems for automatically aligning a transmit coil with a receive coil. Many embodiments may include a movable transmit coil. In these embodiments, the transmit coil may be configured to move in two dimensions on or below a surface.

In the big picture, Apple's invention covers methods and systems for automatically aligning a power-transmitting inductor with a power-receiving inductor. One embodiment includes multiple permanent magnets coupled to and arranged on a surface of a movable assembly accommodating a power-transmitting inductor. The permanent magnets encourage the movable assembly to freely move and/or rotate via magnetic attraction to correspondingly arranged magnets within an accessory containing a power-receiving inductor.

Apple's invention further relates to a power transfer apparatus ("dock") including at least a housing, a power supply, and a power-transmitting inductor. The housing includes an interface surface on which a user may place a power receiving apparatus ("accessory"). The power supply may have at least an active state and an inactive state, and may be configured to switch between the states at a selectable duty cycle. The power-transmitting inductor may be coupled to the power supply and may be disposed within the housing below the interface surface.

Other embodiments may include a configuration in which translation of the power-transmitting inductor may be controlled by a centering component such as a spring, a linear bearing, elastomer, and/or low viscosity fluid as noted in patent FIGS. 5A-5D below. The centering component may assist with the movement and translation of the power-transmitting inductor. 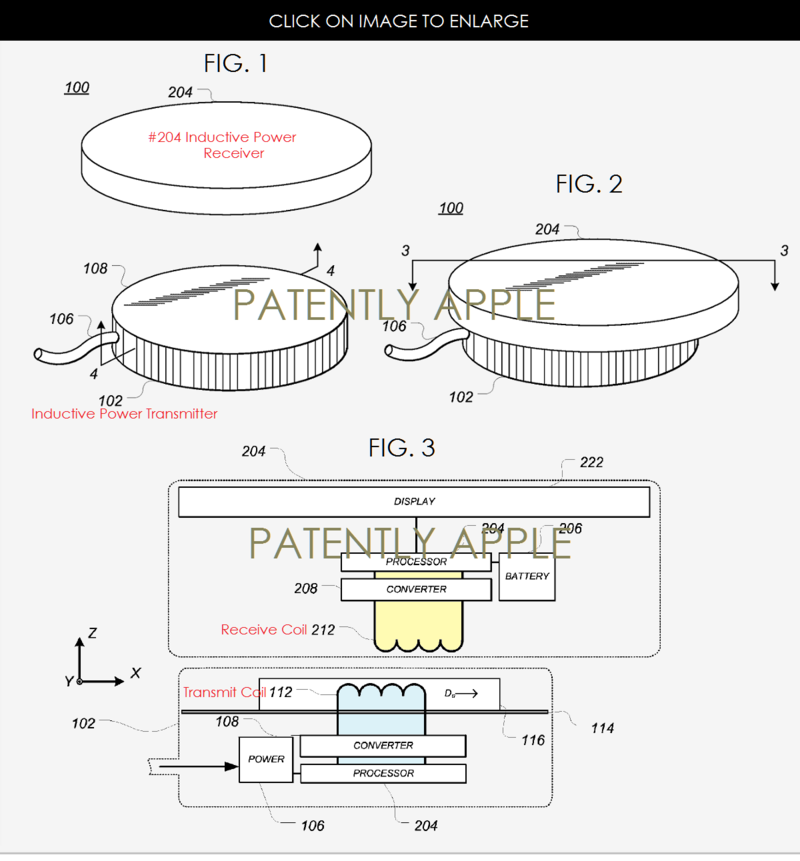 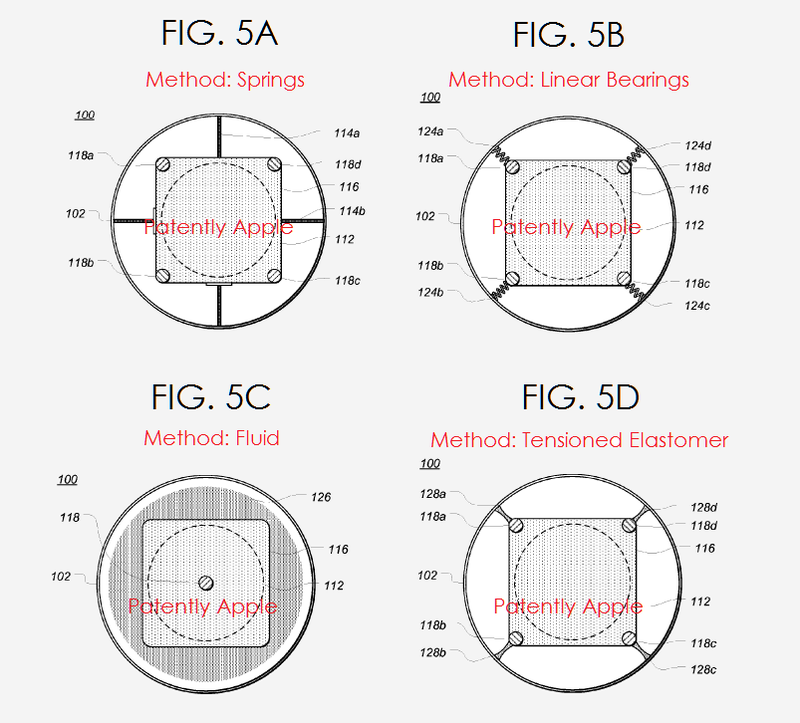 Posted by Jack Purcher on November 05, 2015 at 04:51 AM in 1A. Patent Applications, Apple Accessories, Wireless Charging, Wireless technology | Permalink | Comments (0)