For Apple fans who like to follow Apple's every invention relating to liquid metal, there are two new inventions that surfaced today. The first can be found under patent application 20150307967 titled "Amorphous Alloy Powder Feedstock Processing," of bulk metallic glasses. Click here for more details. Both patents cover the use of liquid metal in every imaginable Apple product and even hints that the process described in these inventions could produce complete car panels. That makes you wonder if Apple's Project Titan will be able to take advantage of the liquid metal process for car parts and beyond. For now, it's at least food for thought. 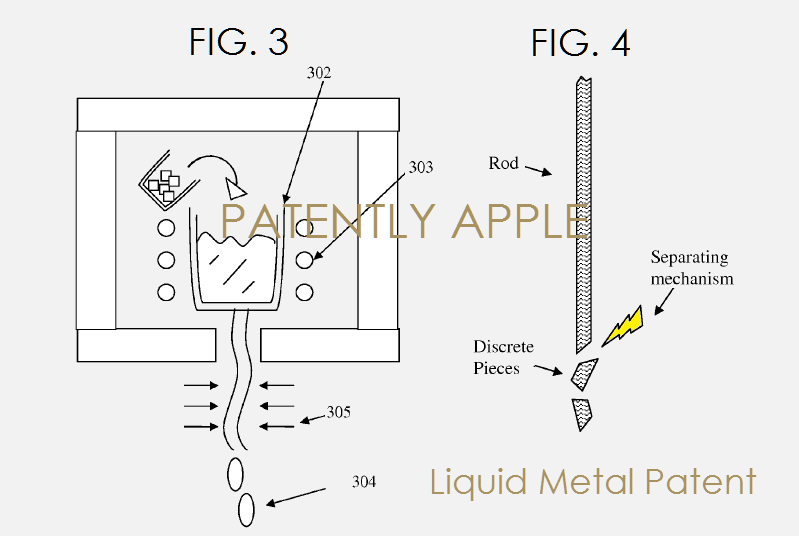 In Apple's patent FIG. 3, a stream of molten mixture of the component elements of the alloy is continuously poured from a suitable container #302 such as a crucible, in which the mixture is molten by a suitable method #303 such as resistive heating, induction heating, electron beam heating, etc. Before the stream contacts any solid or liquid, the steam is broken into discrete pieces 304 and rapidly cooled.

Generally Apple's patents about liquid metal has one section listing products that could be made of liquid metal which covers every Apple device and peripheral they have and even adds possible future products like a TV monitor and a clock.

Apple's latest patents add a complete description of the injection molding process that eventually leads to mentioning that these new molding processes could be used for making car parts and entire body panels of cars. Whether this was always listed in these patents and I just never paid attention to it prior to Project Titan I don't know. But now that Apple's Project Titan is quickly becoming a major Apple initiative, it's a part of the liquid metal invention verbiage that can't be denied having possible relevance in the future.

Injection molding is a manufacturing process for producing parts from both thermoplastic and thermosetting plastic materials. Material is fed into a heated barrel, mixed, and forced into a mold cavity where it cools and hardens to the configuration of the cavity. The mold is usually made from metal, usually either steel or aluminum, and precision-machined to form the features of the desired part. Injection molding is widely used for manufacturing a variety of parts, from the smallest component to entire body panels of cars. For more details on this invention, click here.