As far back as 2013 I've been banging the table about the lunacy of Wall Street's addiction to Samsung's "Shipment Volume" business model vs. Apple's focus on profit that had fallen on deaf ears. The title of the report was "Did you hear the Joke about Android being the Market Leader?" The funny thing is that after two years of Samsung sliding in the market, they've even admitted that Profits Matter more than Volume. And yet with that wakeup call, Wall Street is tone deaf. But at least the media is catching on – big time. I mean, how can we not give BloombergBusiness two big thumbs up for the great article that they published today titled "It's Apple's World, So Why do other Smartphone Makers even bother? The graphic below alone is worth a round of applause. 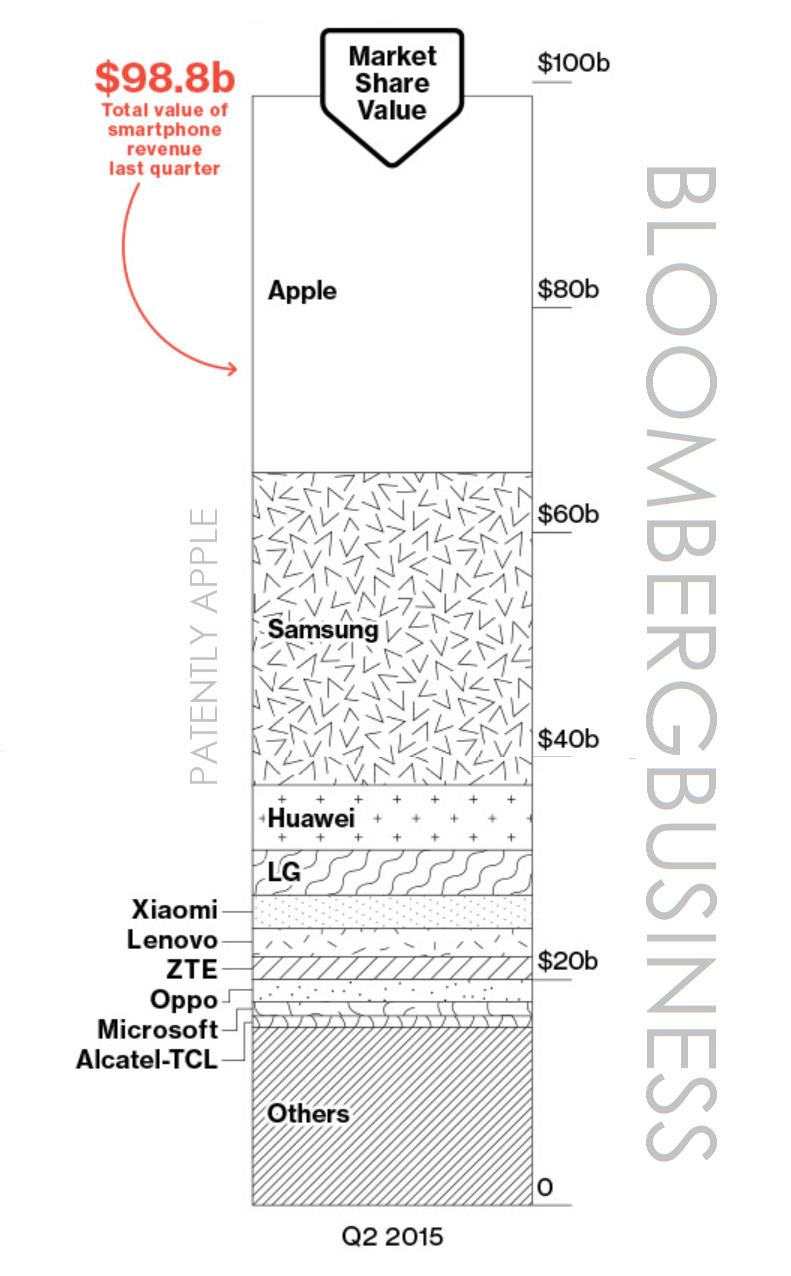 Roger Kay, head of consultant Endpoint Technologies Associates told Bloomberg that unless you're Apple or Samsung, "you can't make money in phones." So why keep trying?

Bloomberg's Ashlee Vance reports that "Together, Apple and Samsung account for more than one in three smartphones sold, data compiled by Bloomberg show. More important, Apple vacuums up more than 90 percent of the profits in the business, and Samsung takes most of what's left. Apple's utter dominance of the money-making end of the industry stems from its business model and unique brand.

That leaves crumbs for the half-dozen other big smartphone manufacturers, plus a sea of upstarts.

And if truth be told, "Samsung is not really making money in smartphones," says Endpoint's Kay. Something that was echoed by Reuters last week in our report titled "Samsung struggles to fix their Smartphone Woes." And even after scratching out a nice profit for Q3 based on lower expectations, it was acknowledged by all that their profits stemmed from their display and semiconductor divisions. There were no profits to speak of for their mobile division and they're not out of the smartphone woods just yet. And, if it weren't for Apple's A9 processor business, the company could have once again been in the red. Now how's that for irony.

BloombergBusiness tells us that "The losers are many and going into a slower economy, Lenovo's mobility unit recently posted a $292 million loss that wiped out their PC profits entirely." And though Microsoft is trying to re-enter the phone business with their newly released Windows 10 smartphones, they just wrote off billions in debt related to Nokia's failure of a venture. It will take Microsoft five or more years to before they see black. So the smartphone market isn't for the faint of heart.

And while Apple isn't immune to the downturn in the market, to date they've done stunningly well against the current by posting a quarterly net profit of $10.7 Billion. That's net profit based on $49.6 billion in sales. Apple's iPhone revenue was up a staggering 59% over last year.

So while Samsung is considering a shift from a Shipment Volume strategy to one that's focused on profits, Apple's been there since the iPhone debuted in 2007. And today, BloombergBusiness stood out and made the obvious very public – loud and clear. For more on this, check out the full report here.