Home Archives Contact Us Subscribe Twitter Facebook Patently Mobile
Apple Launched new 21.5" iMac with 4K Retina with New Keyboard, Mouse and Trackpad Accessories
Apple Reviews the Progress of the iMac from its Initial Launch in 1998 until the Present While refining all of its Magic 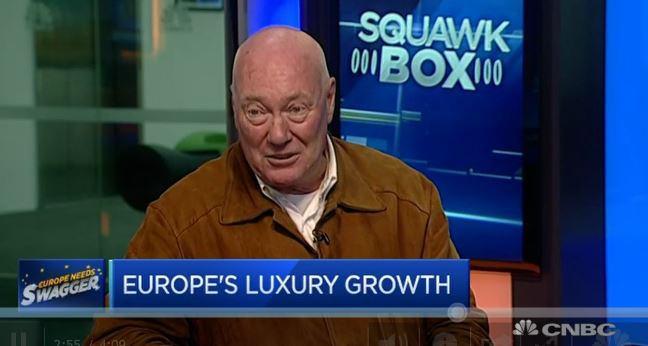 During the CNBC Squawk Box broadcast today, CEO of Tag Heuer, Jean-Claude Biver was asked about whether Apple was going to be strong new competitor (around 2:46 of video), Biver said: Certainly, you must always be concerned about the new-comer is entering into your field. Now how successful has been, we don't know. In the beginning, they were speaking about 10 to 20 million pieces, then sometimes we say they only sold 5 million. Nevertheless, to sell 5 million watches when you have not been a watchmaker is genius. It's phenomenal."

"Now how will it act on the Swiss traditional watch industry? Certainly a big competition, huge! It will be a tsunami, for me – in the price segment, between say $200 and up to eventually $2,000." However, Biver pointed out that "about $2000, the connected watch has a HUGE problem as it has no eternity. It means it will become obsolete and who wants to buy a $10,000 or $20,000 dollar watch that becomes obsolete after 5 or 10 years. So the eternity in a box is what I call a mechanical watch. It's eternal it's like Big Ben is still working after a 150 years!

In March LVMH's general manager Guy Semon was the first to acknowledge the coming Apple Watch and stated that "that we cannot ignore this tsunami that is coming closer."

As we near the holiday shopping season, Biver is out to do some major PR to pump up their 'eternity in a box' theme for high end watches and trying to put the Apple Watch into a niche-corner as the watch for the little guy.

The battle for who will sell more watches this holiday season is going to be an interesting one to see play out. Will Apple stun market naysayers, and more importantly, could Apple capture any significant bite of the higher end of this segment? Only time will tell.