We briefly covered Microsoft's special event in early October in a report titled "Microsoft Guns for Apple by Challenging the MacBook Pro with their All-New Notebook Called 'Surface Book.'" On Wednesday Engadget Reviewed the Microsoft's Surface Book and claimed it was the Ultimate Modern Laptop. One of the key points made during the Microsoft event was that the new 13.5" Surface Book was 2x more powerful that 13" MacBook Pro.

If you've watched any of the Surface events of late you'd know that Microsoft's Panos Panay, Corporate VP for Surface, is somewhat possessed with beating Apple. During last year's Surface Pro event in March, Panay was trying to say that the Surface Pro 3 was better and lighter than a MacBook Air. So his desire and obsession to compare the new Surface Book to the MacBook Pro was his dream come true. After years of giving presentations and seeing a sea of bright Apple MacBook Logos shining in his face from the reporters in the audience it was revenge time.

Yet the question remained, was Panay's claim that the Surface Book was 2X faster than a MacBook actually true? As it turns out, it is in a slight-of-hand kind of way. 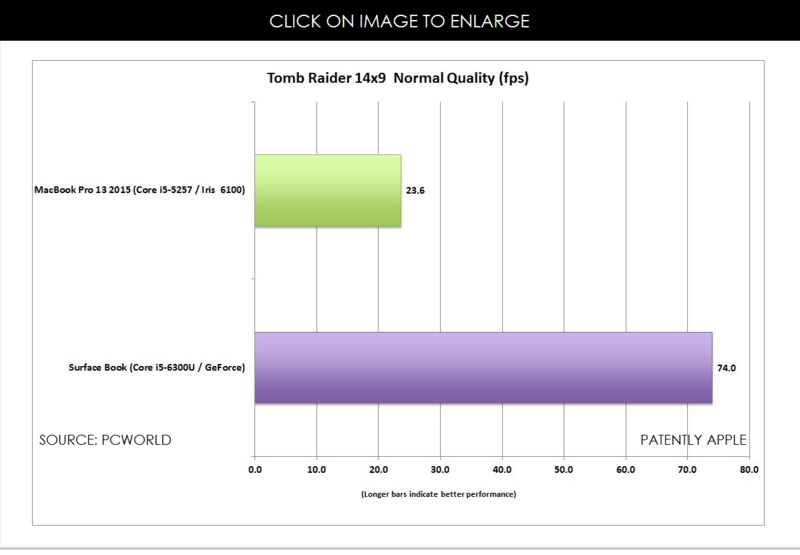 PCWorld reports today that they put the Surface Pro through a series of tests and found that in at least one case, the Surface Book was actually 3X faster than the MacBook Pro as noted in the chart above.

The key to that statistic however is that the Surface Book could come with a discrete GPU which just isn't an option with the MacBook Pro 13". So while it's not a fair comparison, it really is a true advantage that the Surface Book offers which allows Panay to get away with his shaky claim as noted in our cover graphic.

So for playing games or working with graphic intensive apps like CAD/CAM, the Surface Book has a distinct edge over the MacBook Pro. But for everyday computing, the MacBook Pro may actually have the slightest of edge.

That's not to take anything away from the Surface Book, because it's still an impressive hybrid notebook that also gives users the added value of using the display as a tablet for evening or casual reading.

To see how the other tests actually played out between the Surface Book and MacBook Pro read the full PCWorld review here.