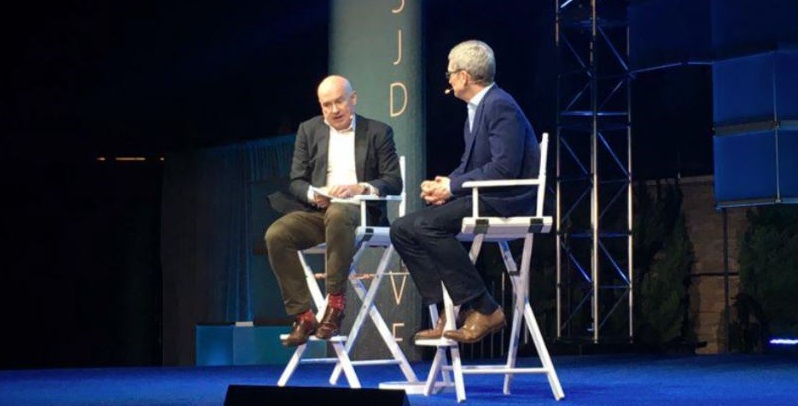 The Wall Street Journal's interview with Apple's CEO this evening on New Frontiers was lackluster with little news to surface. Yet there were a few quotes from Cook that some may find interesting. In a nutshell, here are few points made at tonight's WSJ event:

On Apple Watch: Cook stated "We don't want to give information to competitors." When asked the question when will there be a Watch that doesn't have to be tethered to the iPhone? Cook: "I don't want to tell you that."

On CarPlay: Apple wants people to have an "iPhone experience" in their car. Cook: "When I look at the automobile, what I see is that software becomes an increasingly important part of the car of the future. You see that autonomous driving becomes much more important. It will seem like there will be massive change in that industry."

On Apple TV: Cook keeps returning to the idea that Apple TV is a foundation for more. "The first thing that has to be done when you buy a house is lay the foundation." Is Cook talking about adding Home Automation to Apple TV? Only time will tell. Lastly, Apple will begin taking orders for the new set-top box on Monday, October 26 with shipments beginning at the end of the week.

On Security/Encryption: Cook: "We think encryption is a must in today's world. No back door is a must." Cook added that "No one should have to decide privacy or security. We should be smart enough to do both." Later Cook noted "Don't assume the only way to have security is to have a back door. I wouldn't be so quick to make that judgement."

After the WSJ even, they noted that Apple's CEO Tim Cook was flying to Beijing tonight on business.