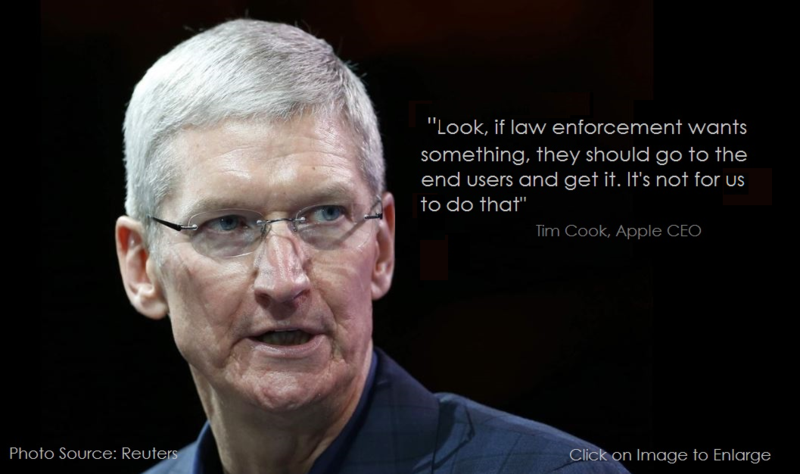 Surprising Update to this Fascinating Story 3:00 pm PST that you won't want to miss!

Late last year we posted a report titled "The DOJ's War with Apple & Google Heating up over Encryption." In that report we noted that a top official at the Justice Department delivered a blunt message to Apple executives. The new encryption technology that renders locked iPhones impervious to law enforcement would lead to tragedy. A child would die, he said, because police wouldn't be able to scour a suspect's phone, according to people who attended the meeting. Apple executives thought the dead-child scenario was inflammatory. Technology companies in general have been pushing back against government requests for cooperation and beefing up their use of encryption and Apple doesn't buy into the DOJ's message. Now the issue is back in the news big time.

In the last month President Obama spoke to the Business Roundtable on the risks associated with cybersecurity vulnerabilities in the U.S and abroad. The argument that he presented and is noted in the video below is more than fair and there has to be a way for the FBI and other agencies to intercept messages and search devices that may contain vital information in specific cases – be they related to terrorism or other emergency situations.

With that said, let it be known that President Obama has at the moment decided to not legislate a forced back door solution on tech companies regarding the issue of encryption for now. He's still hopeful that the two sides on this issue will be able to find a common ground solution.

Apple Ordered to Disable Security on an Apple Device

It was made public late yesterday that Apple was issued an order by the New York Eastern District Court, Brooklyn Office, to disable the security of a device (likely an iPhone) in New York as noted below.

MEMORANDUM AND ORDER: On October 8, 2015, the government submitted under seal an application for an order pursuant to the All Writs Act, 28 U.S.C. § 1651, directing Apple, Inc. to assist in the execution of a federal search warrant by disabling the security of an Apple device that the government has lawfully seized pursuant to a warrant issued by this court. I respectfully direct the Clerk to maintain that document under seal on the public docket of this matter. I further respectfully direct the Clerk to file on the public docket of the same matter my Memorandum and Order dated October 8, 2015, which ruled on the government's application without referring to any specific information that would compromise a continuing investigation. Ordered by Magistrate Judge James Orenstein on 10/9/2015. (Gillespie, Saudia)

Apple's CEO is on record with a past statement as follows: "Look, if law enforcement wants something, they should go to the end user and get it. It's not for us to do that." Yet in certain cases involving a major crime or terrorism, Cook's argument doesn't seem to address the issue adequately.

In light of this latest Court Order, will Apple decide to keep this low key until the harder issues regarding encryption are resolved with various government agencies or will Apple's CEO step out once again to be publicly defiant? Only time will tell.

After our report was posted, the Court publicly filed a Second Memorandum and Order as noted fully above. It reads as follows:

"I defer ruling on the application and respectfully direct Apple to submit its views in writing, no later than October 15, 2015, as to whether the assistance the government seeks is technically feasible and, if so, whether compliance with the proposed order would be unduly burdensome. If either the government or Apple wishes to present oral argument on the matter, I will hear such argument on October 22, 2015, at 12:00 noon. Ordered by Magistrate Judge James Orenstein on 10/9/2015. See attached document. (Gillespie, Saudia)"

U.S. Magistrate James Orenstein said in his ruling that "Congress has done nothing that would remotely suggest an intent to force Apple, in the circumstances of this case, to provide the assistance the government now requests. Several of its members have introduced legislation to prohibit exactly what the government now asks the court to compel."

Orenstein described it as the first written opinion withholding authority, and said he wanted to hear from Apple by Thursday and then would hold an oral argument on Oct. 22 if the government and Apple requested one before making a final ruling on the request.

He provided few details on the government's Thursday application asking him to order Apple to help, saying only that the government had a warrant to seize the device but couldn't unlock it, and leaving out details that might compromise the investigation.

In the absence of clear legislation, Orenstein said, he had to consider how burdensome an order would be on Apple, and noted that forcing the company to unlock phones could affect carefully considered commercial decisions on the balance between public safety and privacy.