Yesterday Apple reported another record breaking quarter with Apple's CEO Tim Cook stating that 2015 was the best year Apple ever recorded in history. Apple sold 48 million iPhones which landed them with a 22.2% year-over-year growth statistic according to IDC this morning. IDC reported today that vendors overall shipped a total of 355.2 million smartphones worldwide in the third quarter of 2015 (3Q15), up 6.8% from the 332.6 million units in 3Q14, marking the second highest quarter of shipments on record. 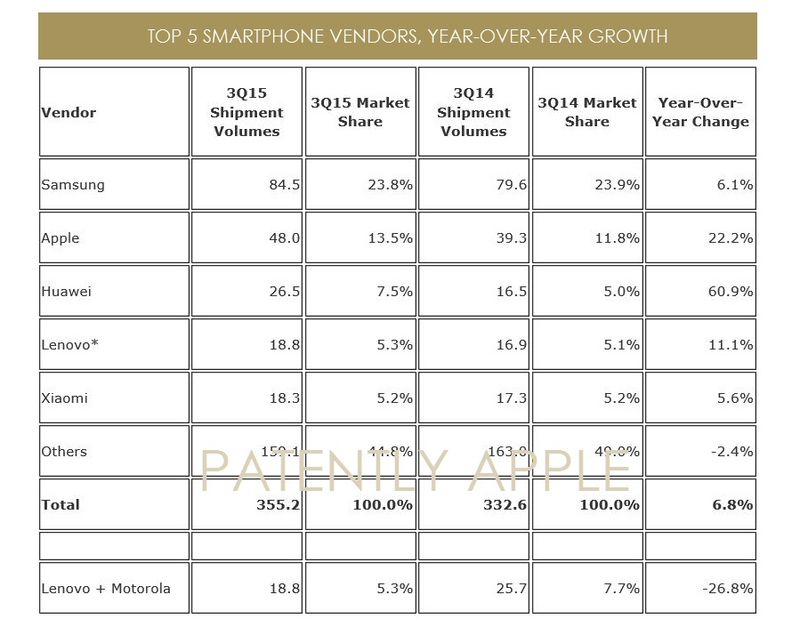 Apple's newest iPhones helped drive third quarter shipments of 48.0 million units, up 22.2% from the 39.3 million units last year. With a record-breaking 13 million iPhone 6S and 6S Plus units shipped during launch week, the two new models continue to capture upgraders and Android converts alike in many key markets such as China and the United States. The arrival of the new "S" models brings a new Rose gold color to the table along with Force Touch, improved camera, and a faster processor. Older iPhone 5S, 6, and 6 Plus models also sold vigorously during the quarter thanks to recent price cuts across all models. Apple's recently launched upgrade plan should also help drive handset upgrades in developed markets where smartphone saturation continues to increase.

Samsung, the near profitless volume king in smartphones once again remained the overall leader in the worldwide smartphone market with 84.5 million units shipped, up 6.1% from last year. Samsung remained focused on premium handsets with the launch of two new flagship devices, the Galaxy S6 edge + and Note5. Outside of the key flagship models, sub-$200 devices (Galaxy Core/Grand Prime, J-Series) drove a majority of shipments in many key emerging markets.

Huawei shipped 26.5 million units, up an impressive 60.9% from last year. Huawei once again focused its efforts on the mid-to-high range as nearly a third of the quarterly shipments were in this price range. Devices like the Honor 6 Plus and Ascend P8 helped grow the mid-to-high range 25% from last year according to Huawei. Despite the rapid growth in China and Europe, Huawei will need to focus on the United States where its presence remains relatively low. The recent launch of the new premium Nexus 6P device could signal that Huawei is finally ready to seriously compete in the U.S.