Last week I posted a report titled "Apple is Considering a Shift in Display Technology for 2017" wherein I pointed to one of the options being AMOLED. I further noted that Apple had dozens of inventions on record focused on improving AMOLED displays. In fact, a single report in May 2014 report pointed to Apple having more than 24 patent applications on this front. Today, two additional OLED related patent applications were published by the U.S. Patent and Trademark Office.

In the May patent report that I reference to above it was specifically noted that one of the reservations Apple had using OLED displays was about 'lifespan.' One of today's two OLED related inventions discusses methods of adjusting OLED displays so as to maintain a desired appearance and to emit light at a desired brightness and/or color so as to prolong the useful life of a display and maintain a desirable display appearance for longer than would otherwise be possible.

Apple further notes that in some embodiments, calibration curves may be employed to adjust the driving strengths of OLEDs or zones, of OLEDs to compensate for ambient light and/or aging effects.

Apple's patent FIG. 8 noted below is a flowchart depicting a method for operating an OLED display to compensate for aging OLEDs; FIG. 9 is a front view of zones across the display of a handheld device. 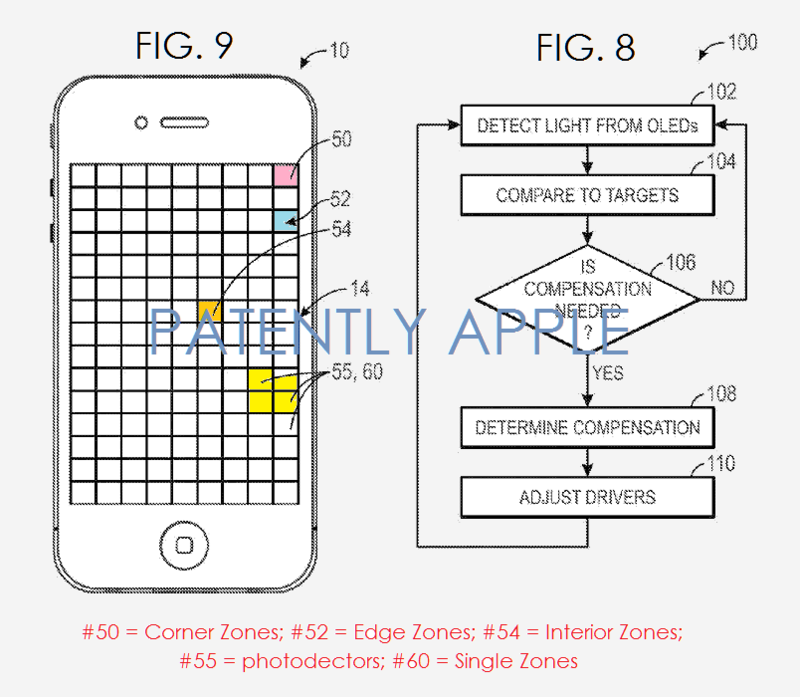 Apple has made refinements to their previous patent claims covering things such as using an "array of pixels"; photodetectors that are "color-sensitive"; and being able to "adjust pixel brightness."

Apple most recent patent application titled "Organic Light Emitting Diode Display Having Photodiodes" was filed in 2015 and published today by USPTO. Apple's original granted patent dates back to 2012. Considering that this is a patent application, the timing of such a product to market is unknown at this time.