The U.S. Patent and Trademark Office officially published a series of 46 newly granted patents for Apple Inc. today. In this particular report we cover a single invention relating to a 3D camera that could be used with a wide variety of mobile and stationary computers. One aspect of the invention covers a unique desktop stand with a virtual projector attached.

Apple's newly granted patent generally relates to a camera accessory that may be configured to facilitate the capture of three-dimensional image data using a single camera with a split field of view or using multiple cameras that are simultaneously coupled to the camera accessory. 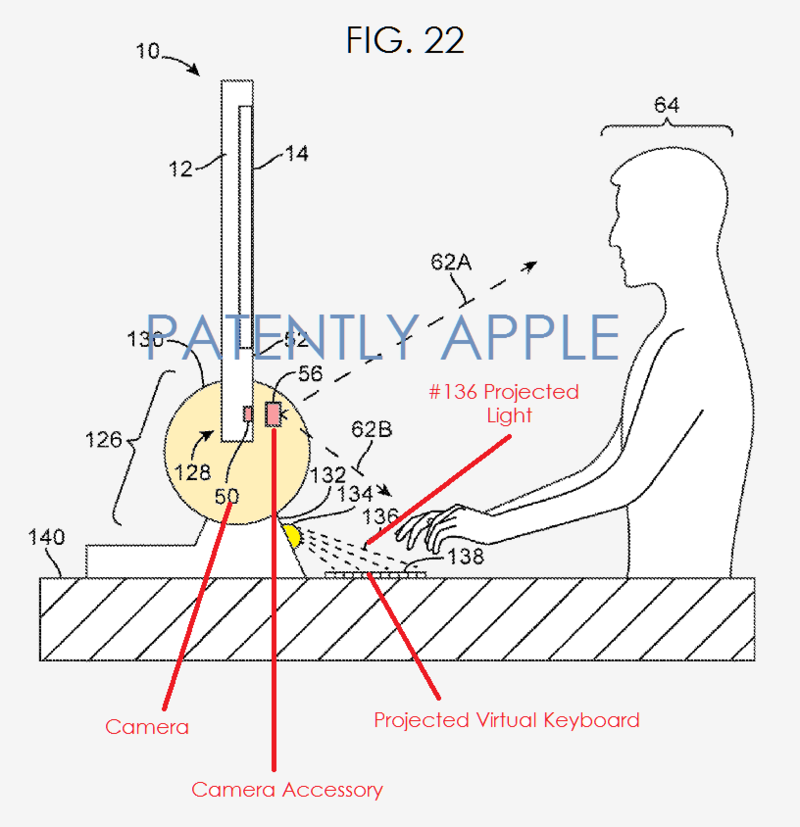 Apple's patent FIG. 22 is a diagram of a system that has a camera accessory implemented as part of a stand

Further in respect to Apple's patent FIG. 22, component 134 of this rotational stand may provide illumination for a user, may include a projector for projecting images, and may include a camera or other sensor for detecting user input (e.g., from a user's fingers). Using this equipment, component 134 can implement a virtual keyboard such as keyboard 138, as illustrated by projected light 136 from component 134.

Different is the fact that optional lenses may be included to modify the field of view of this next-gen camera for computer devices.

In another feature Apple notes that the "Control circuitry of device may display image data such as the image data captured simultaneously using front-facing camera and rear-facing camera using a split-screen layout or other layout that can accommodate multiple simultaneous images.

Apple's granted patent was originally filed in Q3 2012 and published today by the US Patent and Trademark Office.