In 2010 we wrote a series called the Tablet Prophecies. In the third and final chapter of that series we pointed out future twists that could be coming to iDevices that included the use of sound sensory commands using knocks and scratch sounds to activate phone functionalities or to open an app. Today, Apple introduces an application for this very technology to be used with a next-gen iPhone docking system.

Many electronic devices such as smart-phones, media players, and tablet computers have docking stations that facilitate charging the device's battery and/or provide other features such as a sound system, peripheral video, or data communications. In some applications it may be beneficial for the docking station to offer the user methods of interacting with the electronic device where the user may knock on a surface or where the user employs one or more contactless gestures.

Based upon the detected user input, the dock may transmit an activation signal to electronic device commanding it to perform a function such as silencing an alarm, answering an incoming phone call, opening a calendar application, opening a music player, initiating the play of music or a video, etc

For example, the user may program an iDevice like an iPhone such that when the user is notified of an incoming phone call, one impact answers the call, two impacts silences the call ringtone and three impacts sends the call immediately to voice mail. In other embodiments a user may program their iPhone to answer a call when the user impacts the table with his knuckles and silence the call when a user impacts the surface with their palm. 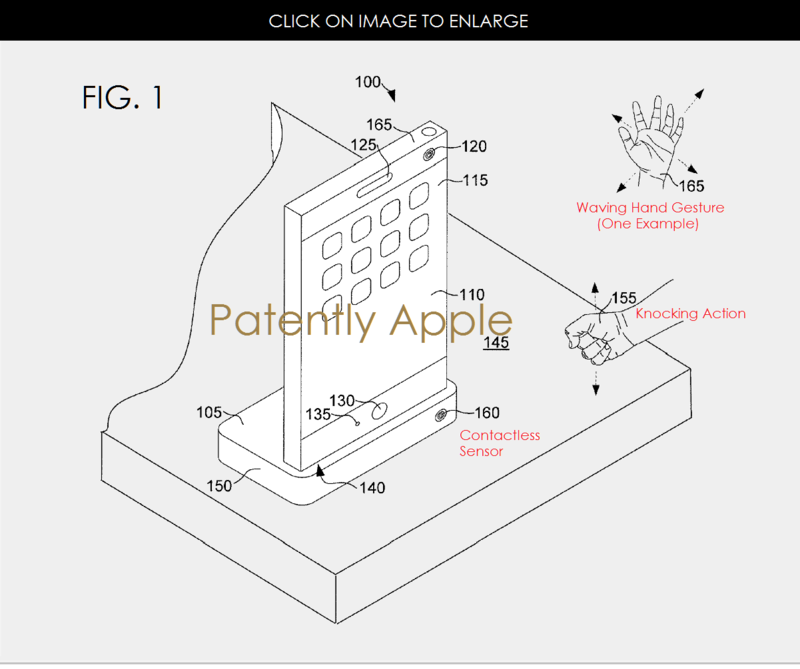 Apple notes that the docking station may determine a message to transmit to the electronic device based on the operating state and the attribute value of a particular gesture. For example, when in a music playback operating state, a left to right hand gesture attribute may correspond to advancing one song track and a right to left hand gesture attribute may correspond to rewinding one song track.

In other applications, it may be beneficial to power off the device and employ sensors within the docking station, powered with a separate power supply, to continuously monitor for contactless user input such that the electronic device only wakes when the user interacts with it.

Apple's patent FIG. 6 below is a simplified schematic of an electronic device mated to a docking station; FIG. 9 is a method of using contactless gesture input. 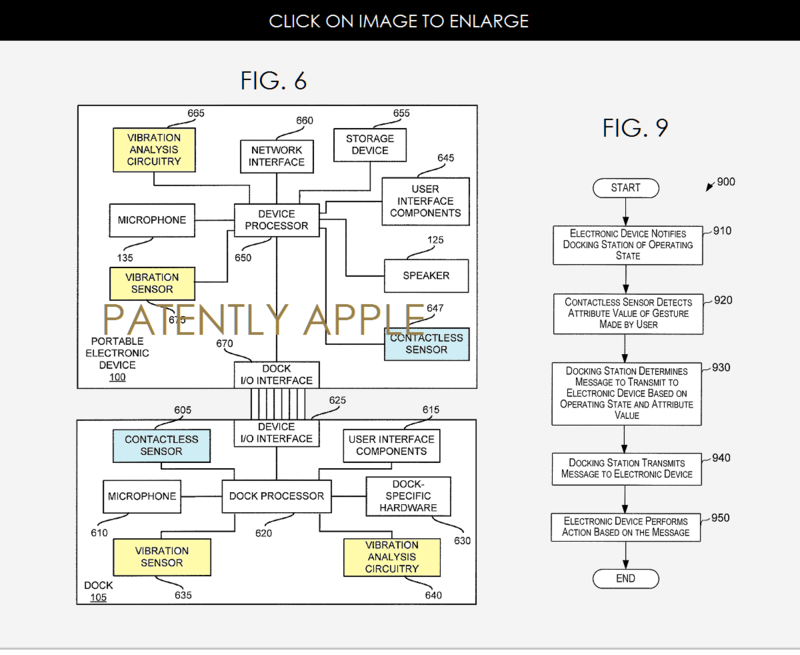