Every once in a while a breakthrough invention surfaces in the patent system that provides us with a glimpse into Tomorrowland. While many are still buzzing that Project Titan may take Apple into completely new technological frontiers, it's not the only possible area of technology that Apple is considering that's far from traditional internet devices. Today, Patently Apple discovered an Apple patent application in Europe that introduces us to an invention that could one day be a common Home Automation System in our homes and businesses.

Instead of getting bogged down in the technology of it all, I'll keep this report simple. As Apple proves that this is a system they're focused on, we're bound to see many more patents detailing every aspect of it. But for now it boils down to this: Apple notes in their filing that the locations of room controls, such as electrical switches and climate-control thermostats, are generally chosen during the architectural design of a building, and the controls are then hard-wired in place within the walls during construction. If the resident subsequently wishes to add controls or move existing controls to another location, it will generally be necessary to    break holes in the wall, run new wiring, and then repair and repaint.

Apple's invention is out to change all of that with a control apparatus, including an optical subsystem, a depth map scanner and a projection system. When a user walks into their family room, for example, the wall would be void of switches. When setting up the 'room control unit' as illustrated below, the projector will be set to project room controls to a portion of a set wall. When the user touches the vicinity of the wall it acts as a virtual control pad and sets off the projector. The projector will then beam virtual controls onto the wall to control devices in the room from lights, to air conditioning and entertainment systems. Of course it will be different for every room the user has this system set up in. 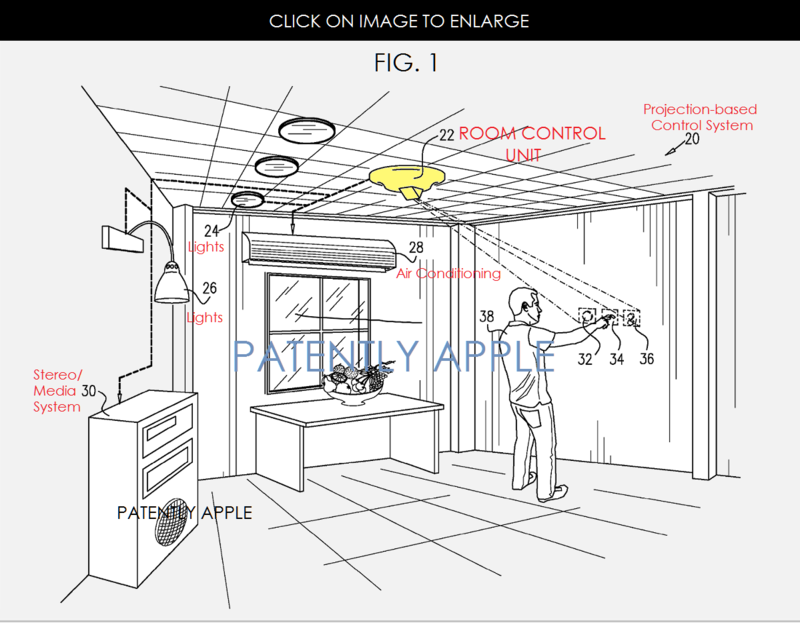