Back in February 2014 we posted a report titled "Apple's A7 Processor Targeted in new Patent Lawsuit," which covered the patent infringement lawsuit filed by the Wisconsin Alumni Research Foundation (WARF). On Friday the Foundation filed a second lawsuit against Apple.

The second lawsuit covers the same patent 5,781,752 as their first lawsuit along with much of the same argument as laid out in our initial report on the matter. The difference this time is that they're extending the lawsuit to now include Apple's latest processors including the A9 and A9X while showing that Apple's initial arguments in this case have been denied. 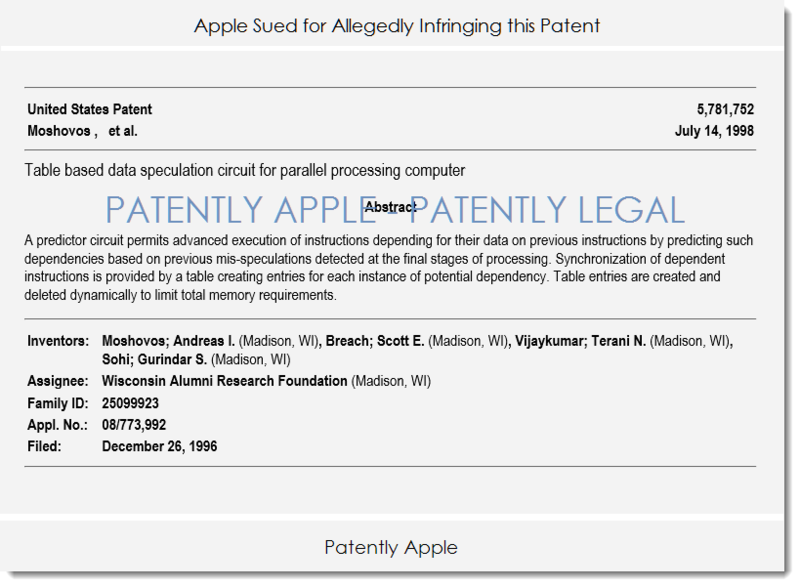 The formal complaint before the court states that "WARF is informed and believes, and on this basis alleges, that Apple has incorporated the technology of WARF's '752 patent into the A9 and A9X processors to achieve enhanced speed, efficiency and performance in its products. WARF now asks this Court to prevent Apple's unauthorized use of the '752 patent," in products listed as the "iPhone 6S, iPhone 6S Plus, and iPad Pro," which contains the newest A9 and A9X processors.

The previous lawsuit involved WARF's allegations that Apple processors with the LSD Predictor and iPhones and iPads that include those processors infringe the '752 patent.

The new lawsuit notes that "As a result of Apple's request to the Court during that lawsuit [the initial lawsuit], only the Apple A7, A8 and A8x processors were the subject of discovery and trial in the preceding suit. Further, Apple filed a request that the United States Patent Trial and Appeal Board ("Board") institute an Inter Partes Review of the '752 patent. In a highly substantive, 27-page decision, the Board made express findings denying institution of the IPR for all claims, concluding that Apple did not show a reasonable likelihood that any claim of the '752 patent would be found invalid.

When Apple petitioned for a rehearing on the grounds that the Board had misapprehended or overlooked important aspects of the prior art in reaching its decision, the Board issued another detailed 10-page decision again rejecting Apple's arguments about the prior art and denying the petition.

The current lawsuit also states that "Apple has stated that it is the policy of the company not to accept or consider proposals regarding licensing from outside entities like WARF for any purpose, making the initiation of this lawsuit a necessity."

The patent infringement case presented in today's report was filed in the Wisconsin Western District Court, Madison Office. The Presiding Judge in this case is noted as being Judge William M. Conley with referring Judge noted as Stephen L. Crocker.