Home Archives Contact Us Subscribe Twitter Facebook MeWe Patently Mobile
TrendForce Thinks that the iPhone Revolution is Coming to an End
The U.S. is on the Cusp of Taking Action against China for Cyber Espionage that Could Affect Apple and other Tech Firms

Today the European Patent Office published a patent application from Apple that reveals their invention relating to the new Apple Watch attachment system for bands. Apple makes it clear that the new attachment of locking system could be extended to future Apple products from covers (like smart covers), computerized glasses and other wearables. Is it too early to expect to see the new magnetic attachment system extend to updated smart covers at tomorrow's event? Only time will tell.

Consumer products such as watches, cameras, phones, purses, and glasses may include one or more accessories attached thereto. The manner in which they are attached may be widely varied. However, they typically suffer from similar, if not the same, drawbacks. For example, many consumer products typically do not include user-friendly attachment systems. Some may require special tools and others may even require taking the consumer product into a shop in order to remove, fix or replace the accessories. Furthermore, even when products have user oriented attachment mechanisms, they may not provide adequate retention force. Even if the retention force is adequate, the mechanism used may be quite robust and large thereby adversely affecting the elegance of the consumer product.

In one example, wristwatches typically include a case and a band. The case carries the components or mechanisms of the wristwatch including the face. The band extends away from the case so that it can wrap around the wrist of a user. The band may be integral with the case.

However, in most cases, the band is a separate part that is attached to the case. For example, the case may include a pin that captures the band thereby attaching the band to the case. In order to detach the band from the case, the pin needs to be removed. In some instances, band removal can be accomplished with a special tool. However, in many cases, the user may need to visit a specialty store or have the assistance of technician in order to remove the band.

In still yet another example, other electronic devices may be coupled to a lanyard or other type of band or accessory. For example a camera, a remote control, a game controller and the like may have a lanyard that is attached to a housing. However, it may be difficult to attach the lanyard to the housing as a portion of the lanyard is typically required to be inserted into a small opening within the housing of the electronic device. In this example, as with the other examples discussed above, the lanyard or other such accessory may be attached to the electronic device or consumer product in a manner that is neither secure nor aesthetically pleasing.

One of Apple's latest inventions mainly focuses on the new Apple Watch attachment system for bands, though the system could be expanded to other consumer devices down the road as noted below.

According to Apple, the attachment system may be used to couple an article, an object, an accessory and the like to the consumer product. For example, the object, article, or accessory may be a cover, a lanyard, a band, a strap, a chain, a dock and the like. Likewise, the consumer product may be an electronic device, a mechanical device, an electromechanical device and so on.

Apple notes that a band may be connected to a media player through an attachment system. Apple notes that the band may in some configurations be magnetically coupled to a second part or to a portion of the consumer product.

More generally, Apple notes that the new attachment system may apply to additional products in the future such as the iPad, the iPhone, MacBooks, computerized glasses, sports devices, medical devices and other wearables. Alternatively, it could apply to future non-electronic devices including purely mechanical timepieces, luggage, purses, jewelry, and the like.

The interoperability of bands and consumer products and other such devices may be facilitated by a common attachment system. By maintaining commonality of receiving modules across consumer products and commonality of mating structures across articles, interchangeability, functionality and choice may be enhanced. This may permit a variety of unique use cases, including using a band to physically connect two consumer products to one another presuming the band has a mating structure at both ends. Likewise, by providing a group of objects (bands, accessories, lanyards, chains, charging mechanisms, data transfer mechanisms, cables, stands, supports, structures, and so on) that each have a common mating structure that may be utilized by the attachment system, and a group of consumer products that each have a common receiving module for receiving the removable module of the attachment system, an ecosystem of objects and devices may be formed to provide increased choice, flexibility, operation and interoperability to a user. 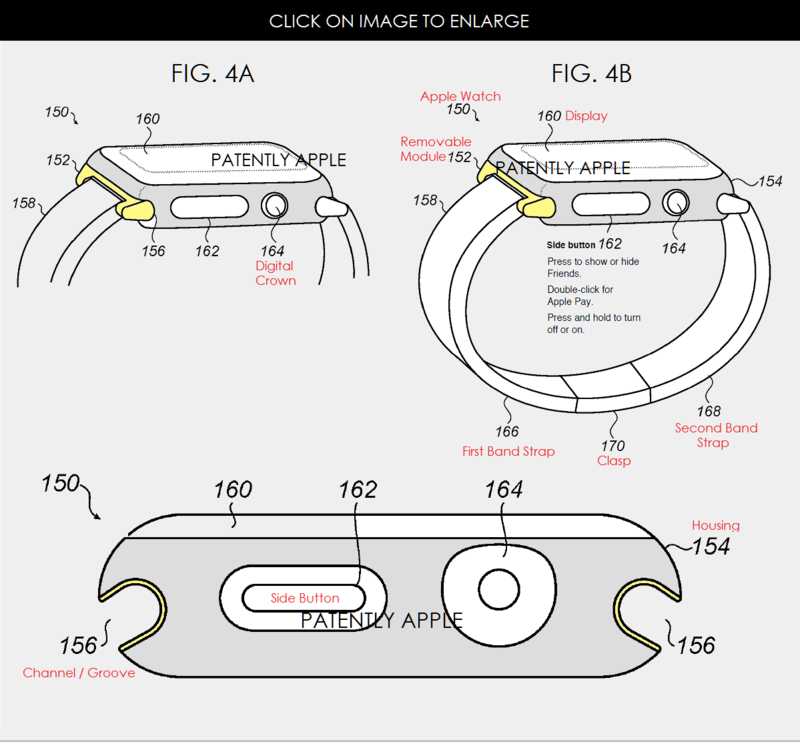 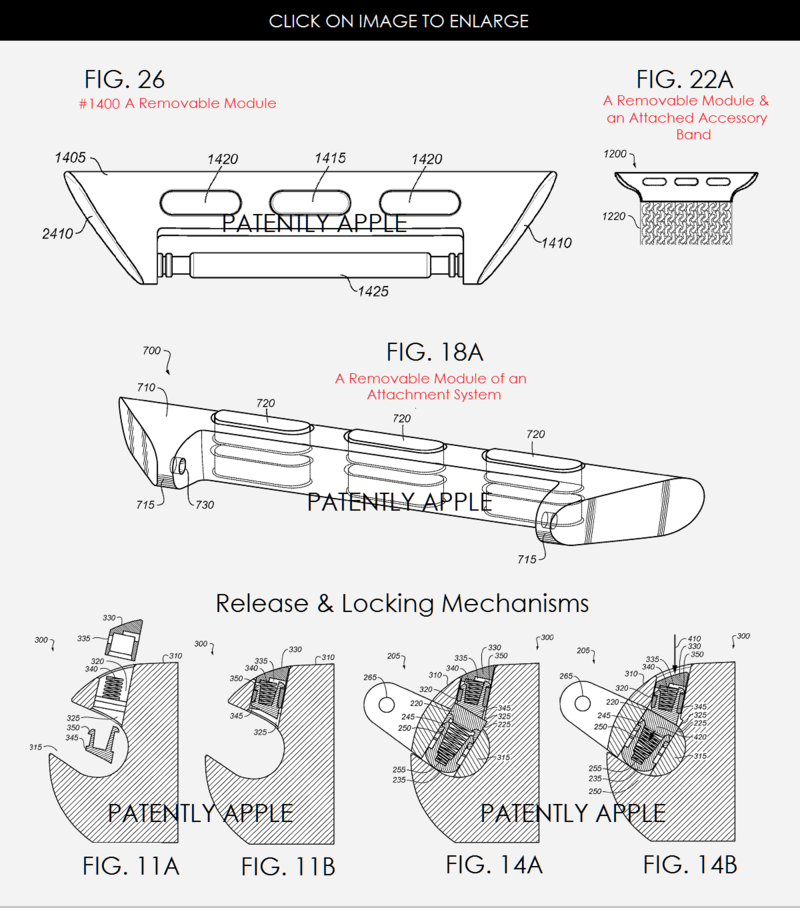 The removable module may be manufactured from stainless steel, aluminum, plastic, gold, platinum or other such materials and combinations thereof.

In patent point #424 Apple notes that "The consumer product may also include a power supply such as a battery, a solar cell, and the like that provides power to each of the components shown

While Apple's patent application was published in Europe today, the patent office actually notes that the invention was actually filed in Australia in late August. The lead engineer is noted as being Ryan Perkins.