A Patent troll by the name of Zeroclick, LLC, legally acquired two very interesting patents from inventor Dr. Nes Irvine, a medical doctor who, according to the court filing, "possessed the prescient vision" to develop touch-only user interface technologies that would enable significant benefits to his medical work and any field where users interacted with graphical user interfaces. Dr. Irvine claims to have "faxed" a letter to Apple's then Director of Software Development, Avie Tevanian back in 2002. Apple never formally replied. Although the case references several Apple patents, the case interestingly makes a big deal out of the "Slide-to-Unlock" patent infringing their the Zeroclick patents. You could almost smell Samsung being in the background in this case. When reviewing the case's "Certification of Interested Entities or Persons" filing with the court it was revealed that two other patent trolls were involved in the case: Granicus IP, LLC and Erich Spangenberg. Whether either of these listed entities are connected to Samsung in any capacity is unknown at this time. It was also interesting to learn in Zeroclick's filing that Dr. Irvine also sent a letter directly to Judge Koh regarding Apple's alleged infringement of his touch related patents. The case as it's laid out in their filing is compelling reading, but until we hear from Apple, it's difficult to understand how important the two Zeroclick patents really are and whether Samsung could try to use these patents in their Supreme Court fight with Apple. For now, those who like to follow legal cases involving Apple will certainly find this case to be one of the most interesting in years.

Plaintiff is the owner and assignee of a portfolio of patents containing the inventions of Dr. Nes Irvine, a medical doctor who possessed the prescient vision to develop touch-only user interface technologies that would enable significant benefits to his medical work and any field where users interacted with graphical user interfaces ("GUIs"). Dr. Irvine filed applications that eventually became his "Zeroclick" U.S. Patents in the year 2000, many years before companies, such as Apple, envisioned a touch-only graphical user interface for use in consumer electronics. 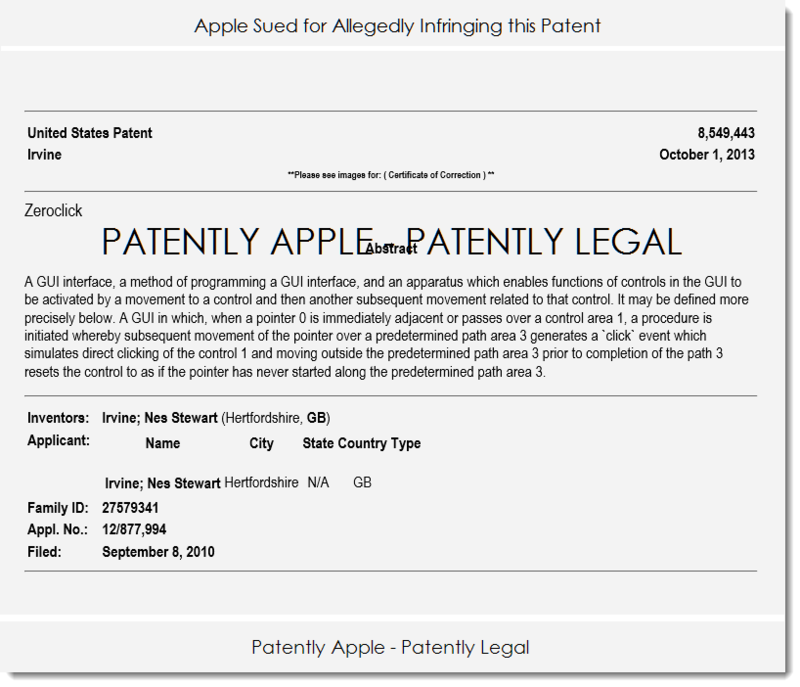 Recognizing his inventions would be useful beyond his medical applications and could enable great commercial success to Apple, Dr. Irvine contacted Apple in July of 2002, years before the release of the first iPhone. In a faxed letter to Apple's then Director of Software Development, Avie Tevanian, Dr. Irvine explained to Apple the novelty and numerous benefits of his "Zeroclick" graphical user interface. Apple never responded to Dr. Irvine.

In the years to follow, Apple began to develop graphical user interfaces, such as those supported by "iOS," whereby users may activate functions with only finger movements on a touchscreen. In addition to developing touchscreen user interfaces, which require no clicking, Apple filed numerous United States patents to protect what it claimed to be its own innovations. Many of these patents cite the work of Dr. Irvine.

Apple then asserted its touchscreen interface patents against its competitors. For example, Apple patented the "slide-to-unlock" functionality of its iOS software, which is embodied in U.S. Patent 8,046,721. Apple asserted this patent against Samsung Electronics Co., LTD (and its related entities) in this District Court. During that case, docketed at 12-cv-00630-LHK, Apple's VP of Marketing Gregory Christie admitted he personally considered slide-to-unlock "pretty important." On appeal to the Court of Appeals for the Federal Circuit, Apple admitted "consumers were more willing to buy, and to pay more for, devices incorporating Apple's slide-to-unlock feature…." That very same slide-to-unlock functionality infringes the patents asserted by Zeroclick in this case, which were conceived many years prior to Apple's '721 patent.

As detailed below, Zeroclick asserts two of Dr. Irvine's "Zeroclick" patents against Apple in this case. Apple's various iOS touchscreen devices, including its "iPhone," "iPad" and "iPod Touch" lines of products, infringe at least one claim of each patent through, among many other functions, the "slide-to-unlock" functionality of Apple's iOS devices.

The two patents that are listed in Zeroclick LLC's formal complaint before the court include granted patents 8,549,443 and 7,818,691, both titled "Zeroclick."

In Count 1 Zeroclick's formal complaint in-part states the following: Defendant [Apple] has infringed and continues to infringe, directly and indirectly, the '443 patent by, among other things, making, using, offering for sale, selling and/or importing unlicensed systems and/or products, covered by one or more claims of the '443 patent. Such unlicensed products include, by way of example and without limitation, "iOS" devices that include a touchscreen such as all of Defendant's "iPhone" line of devices, all of Defendant's "iPad" line of devices and all of Defendant's "iPod Touch" line of products, offered for sale and/or sold in this country by Defendant.

The inventor of the '443 patent, Dr. Nes Irvine placed Defendant on notice of the '443 Patent and its relevance to its touchscreen products no later than April 5, 2014 as a result of a letter from Dr. Irvine to the Honorable Lucy H. Koh, copying legal counsel for Defendant, Harold McElhinny, specifically identifying the '443 patent and Defendant's iOS touchscreen products. Defendant first learned of Dr. Irvine's inventions, which eventually became the '443 patent, in July 2002, when Dr. Irvine faxed a letter to Apple's then Director of Software Development, Avie Tevanian, in which Dr. Irvine explained to Apple his 'Zeroclick' invention."

In Count 2, Zeroclick lists granted patent 7,818,691as being infringed by Apple. In the second count Zeroclick in-part states the following: 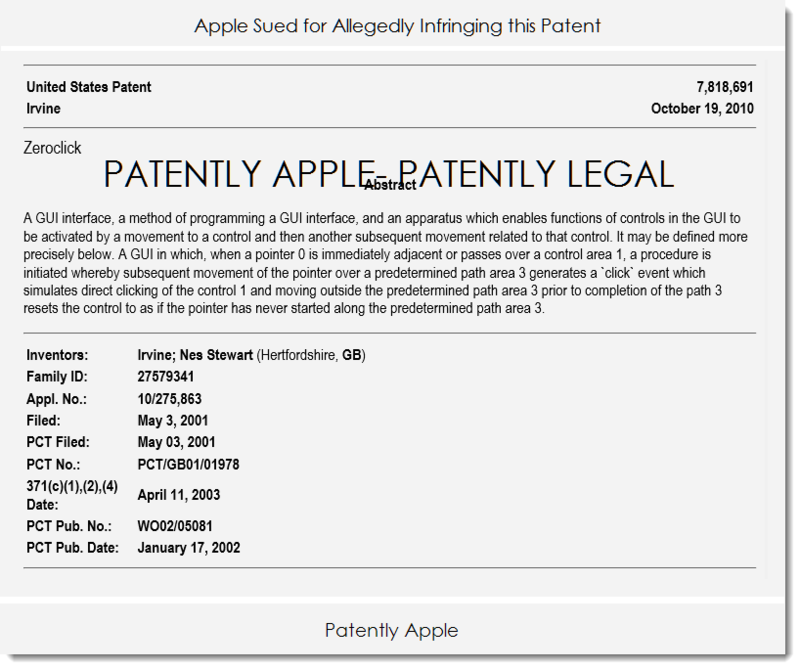 "The inventor of the '691 patent, Dr. Nes Irvine placed Defendant on notice of the '691 Patent and its relevance to its touchscreen products no later than April 5, 2014 as a result of a letter from Dr. Irvine to the Honorable Lucy H. Koh, copying legal counsel for Defendant, Harold McElhinny, specifically identifying the '691 patent and Defendant's iOS touchscreen products. Defendant first learned of Dr. Irvine's inventions, which eventually became the '691 patent, in July 2002, when Dr. Irvine faxed a letter to Apple's then Director of Software Development, Avie Tevanian, in which Dr. Irvine explained to Apple his 'Zeroclick' invention.

Zeroclick Seeks a Royalty from Apple

The patent infringement case presented in today's report was filed in the California Northern District Court, San Francisco Office. The Presiding Judge in this case is noted as being Judge Joseph C. Spero.

In the end, it's a very interesting case in how they laid it out in dramatic fashion, even though Apple had standing patents on touch technology prior to those of Zeroclick's patents that were granted back in 2010 and 2013 respectively.

Secondly, Zeroclick plays up the letters sent to both Tevanian and Judge Koh to add drama to the case. Yet Apple has a policy of not accepting unsolicited ideas about technology from anyone. In fact Apple's policy makes it clear to anyone sending ideas to Apple. They specifically note that "You agree that: (1) your submissions and their contents will automatically become the property of Apple, without any compensation to you."

Then the question becomes why was the letter sent to Tevanian at that point in time to begin with? Apple had never even hinted in the press of going beyond OS X to a new OS for touch related hardware. The iPhone in 2007 stunned everyone in the media. So was Dr. Irvine's alleged "faxed" letter sent to dozens or even hundreds of other individuals and/or companies and not mentioned in the filing so as to make it appear that Dr. Irvine had some kind of divine vision that Apple, of all companies, was working on a revolutionary new platform that could use his ideas? Well, they do mention Dr. Irvine's "prescient vision," in their complaint so perhaps that is indeed what they're claiming ... who knows?

Singling out the letter sent to Tevanian alone makes for great reading, but in hindsight is questionable as to why a random letter faxed to Apple will mean anything in court. Of course this is only an observation on my part and not a legal opinion. A lawyer should be consulted for analysis of this case.

In July we reported that Apple remains the number one target of patent trolls in 2015.