Microsoft has been on a roll lately developing business software for iOS. Over the last few months we've written about NewsCast, Skype, and new access and security controls for Outlook for iOS along with new a 'Translator' app for Apple Watch but to name just a few. In fact there's been so much business software including Office on iOS written for iOS that CEO renamed the iPhone last week during his keynote at the Salesforce conference as the iPhone Pro. Today Microsoft is adding yet another pro app for iOS called 'Invite' which is available for iPhones in the U.S. and Canada, and coming soon to other phones running Windows or Android. But even Microsoft knows that in the enterprise market, iOS is king in mobility.

Microsoft notes that their new 'Invite' app for iOS works best for people with Office 365 business and school subscriptions, but also works great with any email—Outlook.com, Gmail and Yahoo Mail included.

The way Invite works is simple:

1. You suggest times that work for you, and then invite attendees.

You can use the app to invite anyone with an email address—even if they are outside your organization.

2. They select all the times they can attend.

Once you've invited your attendees, they receive an email or an app notification if they have Invite installed. Attendees can then choose on the times that work for them, from the app itself or from a browser. They can also see what options work best for other attendees. 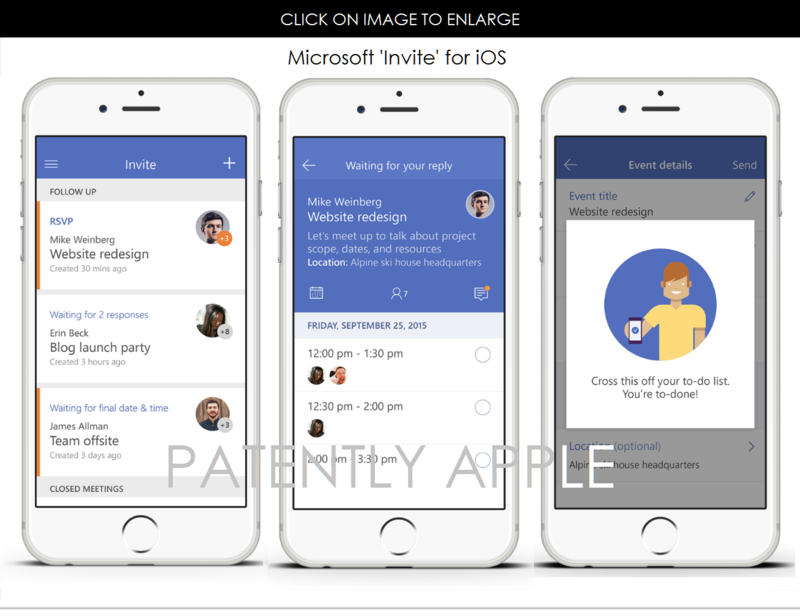 3. Once everyone has responded, you pick the time that works best.

You choose a final date and time whenever you're ready. Just pick the time that most people can make the meeting and tap Send Calendar Invites to get it on their calendars.

All three of the 'Invite' app phases are presented to you in our jumbo graphic for clarity.

Invite is designed to overcome the biggest obstacle when scheduling meetings—not being able to see the calendars of attendees outside your organization. As a result, your proposed meeting can be repeatedly declined until you find a time that works. Invite simplifies this by letting organizers suggest multiple times that work for them and attendees can pick from those suggestions. Invite also shows everyone what times other people have said are good for them.

Also, certain meetings on your attendee's calendars could be easily moved if something more important were to come up—but only they know which ones. To accommodate this, Invite lets attendees pick times that work for them, even if that means moving one of their own meetings. Yep, doing your expenses 30 minutes later isn't going to hurt anyone.

With Invite you won't have to worry about whether attendees are inside or outside your organization, what platform they're on, or whether they have less important meetings squatting on valuable calendar space. Say hello to a simple mobile app that lets you find meeting times that work for everyone from anywhere. Invite. Accept. Done.

For the record, Microsoft's 'Invite" app was only published today and you could download it from iTunes here.

If you prefer, you could also get the app from Microsoft Garage which will direct you to a page like the one noted below. Going that route will introduce developer types to "The Garage" that's a place for a community of interns, employees, and teams from everywhere in the company who come together to turn our wild ideas into real projects. This site gives you early access to projects as they come to life.So it's your choice where you decide to get the new app from.