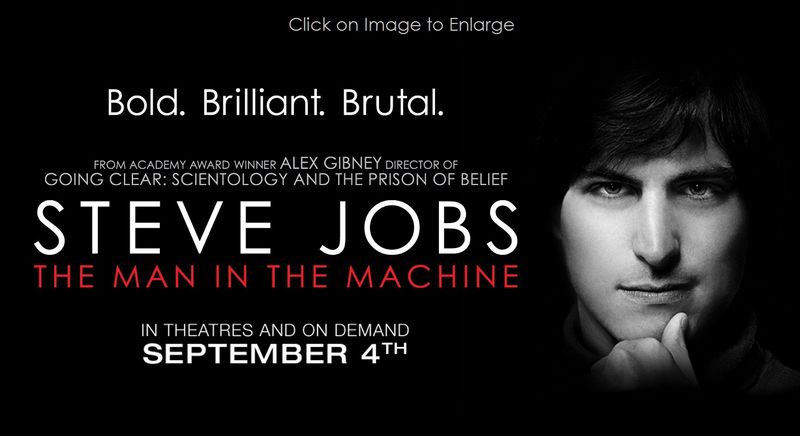 The timing of the new Steve Jobs documentary directed by Oscar-winning Alex Gibney that hit select theaters yesterday may have been by accident or astutely designed to be timed just prior to Apple's product event scheduled for Wednesday. "But neither this, nor Danny Boyle's Michael Fassbender-starring Steve Jobs biopic due next month, is likely to win the approval of Jobs' family or Apple's executives, since both films dwell on the contradictions in Jobs' character – the adopted child who initially denied paternity of his own daughter; the creator of the world's most valuable company who considered philanthropy a waste of time; the Zen seeker who short-changed colleagues, and oversaw an executive culture of backdated stock options and tax avoidance schemes," reports the Guardian.

Daniel Kottke, Jobs' college friend and Apple employee number 12 told Gibney that "Steve was so hugely successful, yet he treated so many people so badly. How much of an asshole do you have to be to be successful?"

Gibney added that he came to consider Jobs as a 'monk without empathy.' More specifically his viewed Jobs from the outside, through a narrow lens "As the guy who presided over a company that came to be the most valuable on Earth, and as somebody who came out of the counterculture, it's a critique of how values become compromised. How you can take on their surface effects – the black turtleneck, listening to Bob Dylan, friends with Bono – yet still pay your Chinese workers a pitiful amount, despoil the environment, do shady stock transactions, pay no tax."

Gibney says Jobs' widow Laurene Powell initially offered to help with the project but then backed off. He claims he later found she had sought to dissuade potential interviewees from participating.

After seeing the screening of the film, Eddy Cue made it clear that he thought it was a mean-spirited and negative view of his friend. Of course you'd expect to hear that from Cue, but the narrative that is found in the Guardian interview fully supports the view that Gibney is clearly out to smudge the memory of Steve Jobs. His views are unrelentingly black, as if it was a mission by unknown backers.

Gibney added another sarcastic tirade by saying that "Jobs knew the people around him could make him great and he could make them rich. So he crafted a vision of him as the grand vizier because that was easier for everyone to appreciate and understand. He provided direction. I think people inside Apple thought, 'Fine, he's making us zillions. We'll pump the bellows in the engine room while Steve goes out and tells a story about himself.'"

He ended by asking the Guardian, "If David is now Goliath, are we still interested in the stories Goliath has to tell?"

The Guardian's interview with Gibney exposed a man with the most negative mindset regarding Steve Jobs that I've ever read. How did this man ever expect to gain Laurene Powell Jobs' endorsement? Was he mad?

In the end it wouldn't surprise me in the least to learn sometime down the road that Gibney was a paid-for mouthpiece for Samsung, but only time will tell. If you've seen the movie and see it differently, send in your comments below.