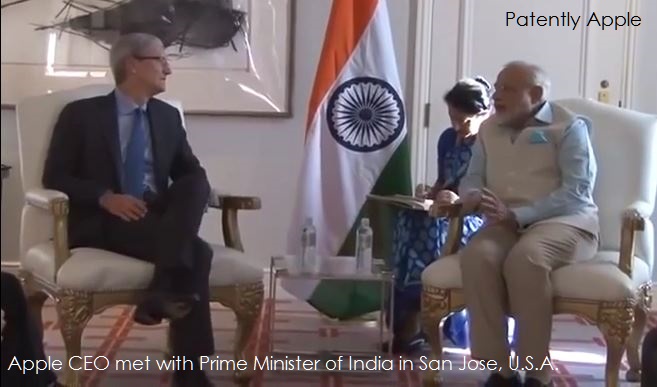 On Thursday we reported that "Apple's Busy CEO Tim Cook to Meet with India's Prime Minister in California over the Weekend," and yesterday Cook indeed met with PM Modi at the Fairmont Hotel as presented in the video above. According to Indian sources, Prime Minister Narendra Modi has invited Apple to set up a manufacturing base in India and its CEO Tim Cook responded positively, officials said here today. This would support the rumor that we were first to report on back in May, in a report titled "Rumor: Foxconn could open a new iPhone Plant in India."

Ministry of External Affairs Spokesman Vikas Swarup told reporters that "The Prime Minister (in his meeting with Cook) said he would like Apple to start manufacturing in India. He mentioned the huge opportunities India offered. He further noted that "Foxconn, which is Apple's largest manufactures, has decided to set up a manufacturing base in India."

Swarup added that there was also some discussion on Apple Pay, how this can be part of Jan Dhan Yojana (Department of Financial Services Ministry of Finance Government of India) for instance and other such initiatives.

The Indian Ambassador to the US Arun K Singh said that during the meeting there was a sense that a lot of design innovation is happening in India. "As Apple expands its presence in India including a manufacturing presence there could be enhanced opportunity for app development related to the apple platforms.

Prime Minister Modi also visited the Tesla plant yesterday as noted in this video. The Prime Minister also discussed with Tesla motors CEO the implications of the revolutionary battery technology in India and developments in renewable energy.

The Prime Minister will be visiting the UN on his visit to America to push for India to have a permanent seat on the UN Security Council.