The Reuters report notes some experts say that Apple's strict stance on privacy is likely to undermine its ability to compete in the rapidly progressing field.

Yet when asked for comment about Apple's strategy, a company spokeswoman pointed to statements from Craig Federighi, senior vice president of Software Engineering, who described the release from Apple's WWDC this year that stated that "adding intelligence throughout the user experience in a way that enhances how you use your device but without compromising your privacy, things like improving the apps that you use most."

The report further noted that "Apple is strengthening ties to academia to find the talent it will need, attending more industry conferences and discussing its use of tools emerging from university labs, academics say. The report quoted John Duchi, an assistant professor at Stanford University stating that "some machine learning experts might be enticed by the challenge of matching Google's smarts amid privacy constraints."

Reuters later noted that "If Apple succeeds without compromising privacy, then Google may begin to face questions about its approach to analyzing users' data." This is a point that Apple's CEO Tim Cook has been pounding the table on for some time now as noted in his message on Privacy that could be found in full here.

Apple's strategy for Siri and beyond may become clearer on Wednesday when iOS 9 is revealed which is to include a variety of intelligent reminders, which analysts expect will rival the offerings from Google's Android.

While Apple introduced Siri in 2011 it has been losing ground to both Google and Microsoft whose digital assistants have become more adept at learning about users and helping them with their daily routines. Microsoft has just added Cortana to Windows 10 in the U.S. as noted below. It could bring up top news, weather, searches, remind users of calendar events and more; a feature new iMac users would appreciate this fall if Apple made Siri available to them. 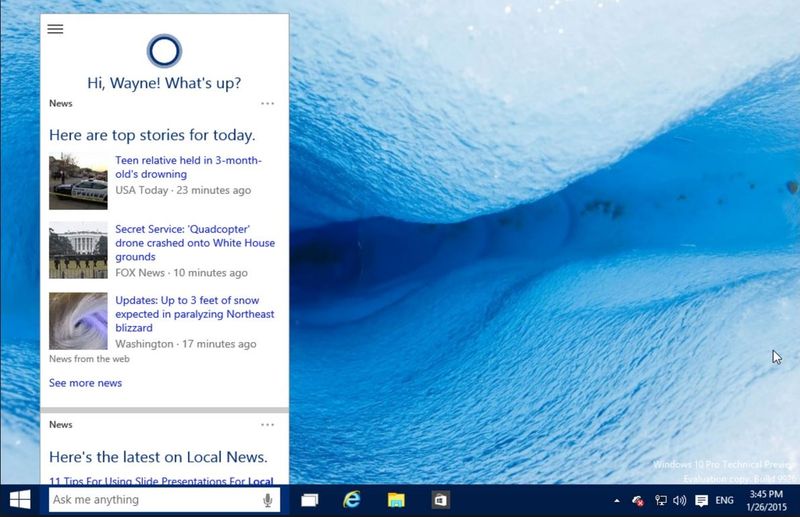 With Intel's Optane products coming to market using 3D XPoint technology in late 2016, many new sensors and services like Cortana and possibly Siri on the desktop will be able to advance exponentially.

In respect to the iPhone, the report notes that "As users increasingly demand phones that understand them and tailor services accordingly, Apple cannot afford to let the gap persist, experts say. The iPhone generated almost two-thirds of Apple's revenue in the most recent quarter, so even a small advantage for Android poses a threat." For more on the argument relating to the use of big data, see the full Reuters report here.