St. Luke Technologies, LLC has filed a patent infringement lawsuit against Apple with 7 counts of infringement of patents that were based on inventions from Dr. Nagel, Dr. Felsher and Steve Hoffberg relating to cloud computing encryption. St. Luke points out that Apple has cited their inventions in no less than 10 of their patents calling them "innovative." Over the years these collective patents have been cited in over 550 patents in the United States by high tech companies like Microsoft, SAP, IBM, Oracle, Google, Cisco and many more. The lawsuit notes that Apple was losing business due to not having strong encryption technology and allegedly copied their technology.

In an effort to expand its product base and profit from the sale of infringing cloud computing encryption technologies and information record infrastructure technologies, Apple has unlawfully and without permission copied the technologies and inventions of Dr. Robert H. Nagel, David P. Felsher, and Steven M. Hoffberg.

The STPC patents have been cited in over 550 United States patents and patent applications as prior art before the United States Patent and Trademark Office. The STPC patents disclose systems and methods for secure communications over a computer network where a third party (intermediary) performs a requisite function with respect to the transaction without requiring the intermediary to be trusted with respect to the private information or cryptographic keys for communicated information. The inventions taught in the STPC patents employ secure cryptographic schemes, which drastically reduce the risk of unauthorized disclosure of encrypted data. 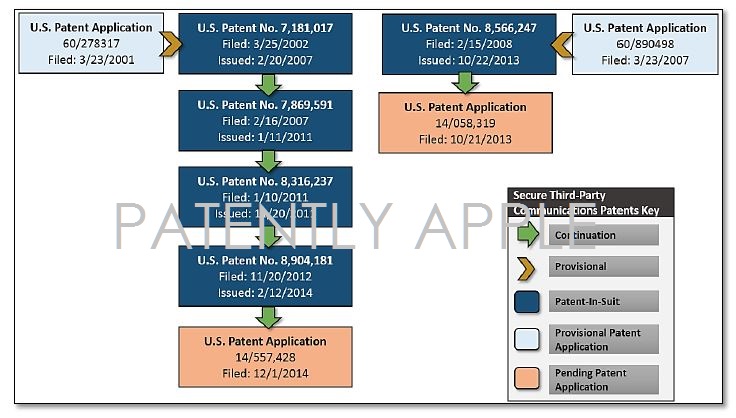 Over a decade after Dr. Nagel and his co-inventors conceived of the inventions disclosed in the STPC patents, an Apple white paper described systems such as Dr. Nagel, Mr. Felsher, and Mr. Hoffberg's secure third party communications system as "innovative" and a "leap forward."

[Excerpt from White Paper] "We thought about the security hazards of the desktop environment, and established a new approach to security in the design of iOS. We developed and incorporated innovative features that tighten mobile security and protect the entire system by default. As a result, iOS is a major leap forward in security for mobile devices."

St. Luke's complaint added that "Tim Cook, Apple's Chief Executive Officer, has repeatedly stated that the use of encryption technologies is central to Apple's business, particularly where data is stored in the "Cloud."

[Tim Cook] "We don't read your emails, we don't read your messages, we find it unacceptable to do that. I don't want people reading mine! […] We have designed Apple Pay purposely so that we don't know where you buy something, how much you pay for it, what you bought. We don't want to know any of that."

From an interview with Germany's "Warum ich mich den Deutschen so nah fühle, BILDE-ZEITUNG" March 2015 (Mr. Cook went on to describe the importance of secure communications in the context of email hacking: "If Snowden did anything for us at all, then it was to get us to talk more about these things.").

Reuters sold thousands of information systems modeled on Dr. Nagel's patented inventions. Hundreds of companies including IBM, Intel, and Xerox cite Dr. Nagel's groundbreaking inventions described in his patents as relevant prior art in their own patents.

Following his development of groundbreaking electronic data distribution systems for Reuters, Dr. Nagel used his insights to develop the secure communications technologies that are used today by Apple and many of the world's largest corporations without attribution or compensation.

Dr. Nagel's interest in developing secure systems for the provision of highly secure data was driven in part by his experience being totally blind.8 Dr. Nagel recognized that the growing adoption of the Internet and increased computational power presented unique challenges to the security of medical records. Dr. Nagel also had the insight that the challenges presented in controlling access to secure medical records could be applied outside the context of medical records, with wide applicability to the security of data on networks where an intermediary could have access to secure information.

The rise of cloud computing (the delivery of on-demand computing resources over a distributed network), has made Dr. Nagel and his co-inventors' insights uniquely valuable. Medical records, financial information, email messages, and other forms of electronic data are now placed on remote servers and accessed via a network by a diverse variety of users, under a diverse variety of circumstances.

The STPC patents have been cited in over 550 United States patents and published patent applications as prior art before the United States Patent and Trademark Office.10 Companies whose patents cite the Secure Third-Party Communication Patents include:

The inventions taught in the STPC patents relate to the encryption of data passed through an intermediary and have been recognized by Apple as important and valuable:

The adoption of secure encryption technologies was critical to Apple's current success. An April 2008 article in PC Magazine describes Apple's struggles with developing sufficient encryption for data passed over a computer network by intermediaries:

According to a report in InformationWeek:

"Macs are banned from many government departments because there aren't any 'approved' applications to encrypt them. So why doesn't Apple CEO Steve Jobs do something about it? In the US last week, The National Health Institutes banned MacBooks from being used by staff because they lack an approved encryption tool to protect client information." 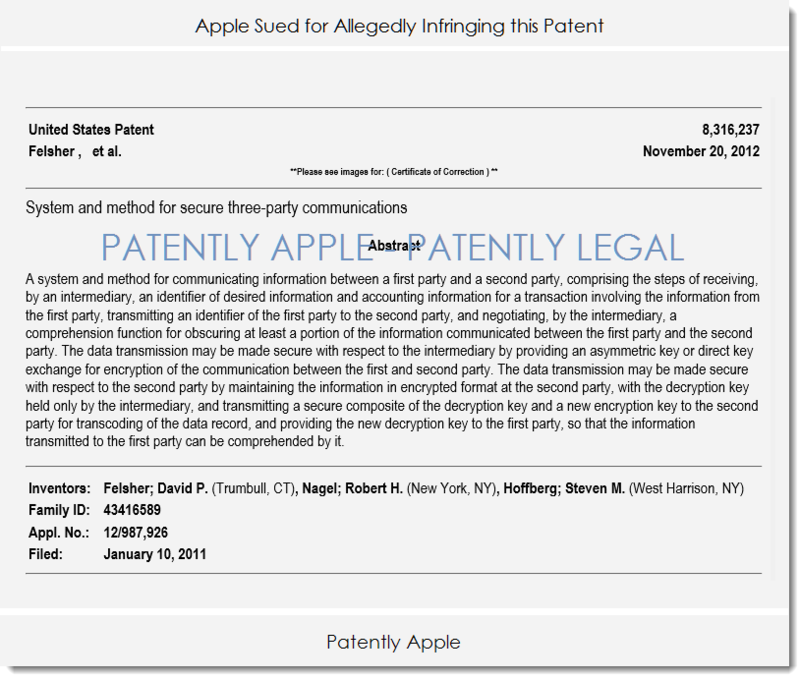 Count 2: It's is the belief of St. Luke Technologies that the following Apple products infringe upon patent 7,181,017: iMessage; HomeKit; iCloud and Apple iDevices.

Luke Technologies notes under this count that "On information and belief, Apple had knowledge of the '017 patent since at least 2002. Apple cited the '017 patent in the following issued United States Patents:

Count 6: It's is the belief of St. Luke Technologies that the following Apple products infringe upon patent 7,587,368: FairPlay Streaming in applications and on Apple TV; the Apple iTunes Store; iOS 6 and above; FairPlay Streaming is built into Safari.

Count 7: It's is the belief of St. Luke Technologies that the following Apple products infringe upon patent 8,498,941: iDevices, the Apple iTunes Store, Apple iTunes client for iOS X, iOS and Windows (collectively "iTunes."), functionality in iTunes on iOS and a plurality of automated electronic databases covering iTunes in relation to movies, TV shows, books and more.