A couple of Apple patents in the last year have surfaced illustrating their work on a new breakthrough zoom lens system with an advanced telephoto lens. Today marks the third major patent application regarding such a system. This time around, Apple focuses on a folded telephoto camera lens system. It's obvious that Apple is trying to deliver a revolutionary new dynamic for iDevice cameras and considering that Apple now possesses advanced camera technology from both PrimeSense and LiNX, Apple could take a giant leap ahead of their competitors if they bring their new camera technology to market in a timely manner. For sure Apple's competition isn't standing still. Just yesterday the Korean press reported that Samsung had made a small-scale investment in Canadian-based Bubl Technology. Bubl is working on a new 360º camera. So the race is on to deliver next-gen experiences with mobile camera systems. Will we see any of Apple's camera advances for the iPhone 7? Yes, more than likely. The only question is to what extent.

More specifically Apple's invention is to provide future iDevices with a high-resolution telephoto camera in a small package size. A camera is described that includes a photosensor and a compact folded telephoto lens system. In embodiments, folding the optical path of the camera lens system may facilitate achieving a small form factor for the camera lens assembly, and may also facilitate achieving a high resolution optical lens system using a relatively small number of lens elements in the small form factor. Embodiments of folded telephoto lens system are described that may provide a larger image and with longer effective focal length than has been realized in conventional small form factor cameras. Embodiments of a telephoto camera including the folded telephoto lens system may be implemented in a small package size while still capturing sharp, high-resolution images, making embodiments of the camera suitable for use in small and/or mobile multipurpose devices such as cell phones, smartphones, pad or tablet computing devices, laptop, netbook, notebook, subnotebook, and ultrabook computers. In some embodiments, a telephoto camera as described herein may be included in a device along with a wider-field small format camera, which would for example allow the user to select between the different camera formats (telephoto or wide-field) when capturing images with the device.

In at least some embodiments, the folded telephoto lens system includes a folded optical axis (referred to herein as AX) that includes a first (object side) optical axis and a second (image side) optical axis, a first group (referred to herein as GR1) of refractive elements, a light path folding element (e.g., a prism or plane mirror) that folds the light optical path by redirecting or reflecting the light from the first optical axis on to the second optical axis, a second group (referred to herein as GR2) of refractive elements, and a photosensor at the image plane. At least some embodiments may also include an infrared filter. At least some embodiments of a folded telephoto lens system may include zooming capabilities for focusing an object scene at infinity (object distance from camera .gtoreq.20 meters) to near object distance (<1 meter). For example, in various embodiments, the first group (GR1), the second group GR2, and/or the photosensor at the image plane may be zoomed, moved or translated for focusing an object scene from far distance (.gtoreq.20 meters) to near distance (<1 meter).

The sum of the absolute values of the distances may be used here since by optical design convention, the algebraic signs of the optical parameters (such as radii of curvatures, distances, focal length, etc.) change signs following a reflecting surface. More generally, the lens system may be configured such that the telephoto absolute value ratio (TTL/f) of the folded lens system satisfies the relation, 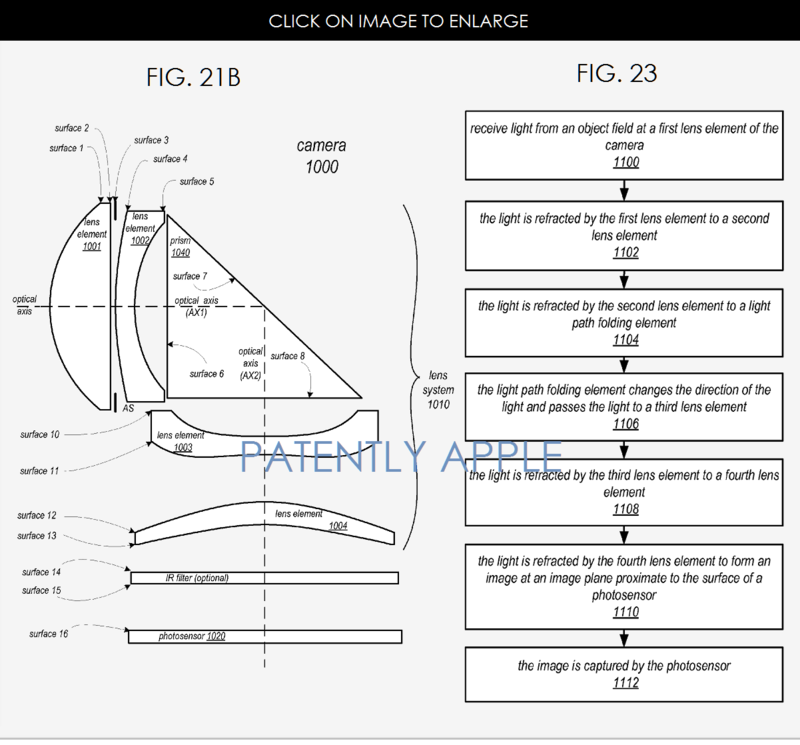 Apple credits Romeo Mercado as the sole inventor of this patent application which was originally filed in Q2 2014. Considering that this is a patent application, the timing of such a product to market is unknown at this time.