The U.S. Patent and Trademark Office officially published a series of 55 newly granted patents for Apple Inc. today. In this particular report we cover another Apple patent that was gained when acquiring the Israeli firm PrimeSense. You could also review five additional high-end 3D camera related PrimeSense patents here. The imaging device noted in the patent appears to be a next-gen Kinect-Like device. Considering that one of its primary applications is for interacting with games, you have to wonder how close Apple is in delivering such a device. Is it years away or something that Apple could integrate into a next generation of Apple TV? Only time will tell.

Apple's newly granted patent covers their invention relating to optical projection and imaging, and specifically to devices and methods that use arrays of lenses to enhance the performance and characteristics of projection and imaging systems. Apple's patent FIG. 1 noted below is a schematic, pictorial illustration of a system for three-dimensional (3D) mapping.

The depth information in the 3D maps may be used by a host computer #24 as part of a 3D user interface, which enables the user to interact with games and other applications running on the computer and with elements shown on a display screen 26. 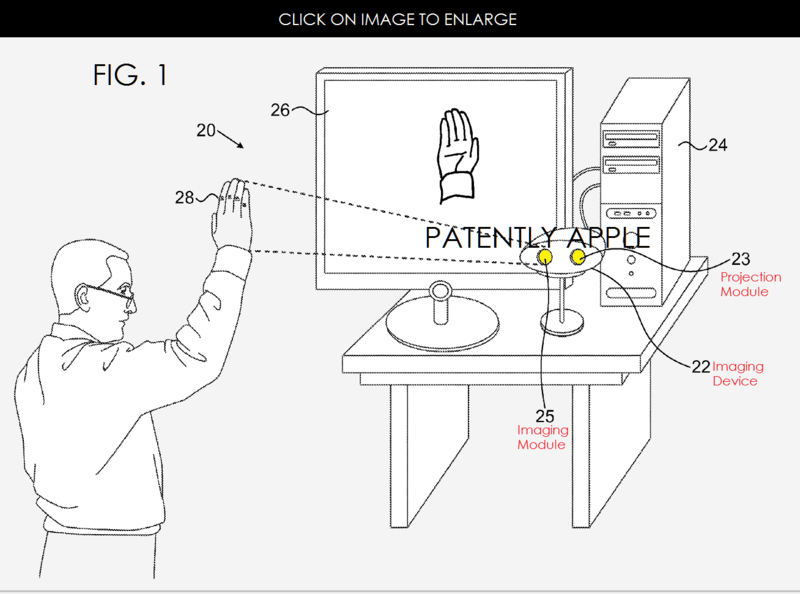 Apple credits Alexander Shpunt and Benny Pesach as the inventors of this granted patent which was originally filed in Q4 2011 and published today by the US Patent and Trademark Office.