A little band of SACOM protesters gathered outside one of Apple's largest stores in Hong Kong today, angry over the wicked working conditions that are being deployed by one of Apple's key suppliers of touchscreen glass for the iPhone 6s. Of course they didn't complain last week, they chose to protest today as the iPhone 6s came to market. Then again, business is business and marketing is marketing no matter which side of the issue you're on.

News out of Hong Kong today noted that Hong Kong-based Students and Scholars Against Corporate Misbehaviour (SACOM) claims that Lens Technology, which makes touchscreen glass, used forced overtime, withheld wages and risked workers' health after a months-long investigation into three of its factories. They also claim that workers had to go without a day off for a month so as to be able to meet iPhone 6s demand. The violations were discovered by the group who sent in undercover workers in several plants owned by Lens Technology.

As the iPhone 6s went on sale in markets including Hong Kong, Japan and mainland China today, SACOM called for Apple to "apply immediate measures to rectify exploitations in its supply chain." In a formal statement SACOM stated, "We urge Apple to fulfil its corporate responsibility ... to give workers a workplace with dignity and respect."

SACOM spokeswoman Liang Pui-kwan said the group was not only targeting Apple. "But Apple is the richest and has the biggest ability to make change and bring the industry forward," she said.

Yet while it's nice to see it on paper and hear Apple VPs saying that all is right in China and that things will get better, we continually hear about extremely poor working conditions and horrid plant policies year in and year out at various Apple supplier plants.

While Apple will continually point to their latest reports about official positions that they take on these matters with nice colorful charts, it would be great to see and hear Apple publically going to these factories in question and punishing those who are in clear violation immediately and as loudly as the complaints that are being made against them in the press. But while Apple needs to hit a certain quota for the iPhone 6s, I doubt anything will occur to help working conditions anytime soon when it matters.

Apple doesn't want to own manufacturing plants in Asia so that it's easy to point and say it's out of their control or that they have rules on paper that others aren't abiding by. Without Apple showing the world that some plants are actually being penalized severely for their transgressions and to show that Apple's rules really have teeth, it's beginning to look more like a media game that's being played out more than anything else.

In December 2014 we published a blistering report titled "The BBC Report About Apple is Motivated by Politics and Unions," as it was clear that the unions and union supporters around the world were trying to paint the ugliest picture of Apple imaginable. There was never a word in their documentary called 'Broken Promises' about Dell, HP, Xiaomi or others closing their eyes for needing the very same supplies as Apple and never gave Apple any credit for trying to improve conditions for workers or for pushing Foxconn to work with unions.

So it's not like I open handedly believe what union groups spew out about Apple because I don't. But it's also not always so black and white as some would like it to be. Until Apple gets more aggressive in openly punishing companies in clear violation of their policies in a timely manner, who's ever going to take them seriously? – Especially the very plants that are in violation.

In the end, Apple (like all other tech companies) want the cheapest prices for their mobile device components and the plants are basically doing what they have to do to in order to meet Apple's demanding prices. This is the real game being played out year after year. The rest is just big branded PR (entertainment) for the media and that's really too bad. 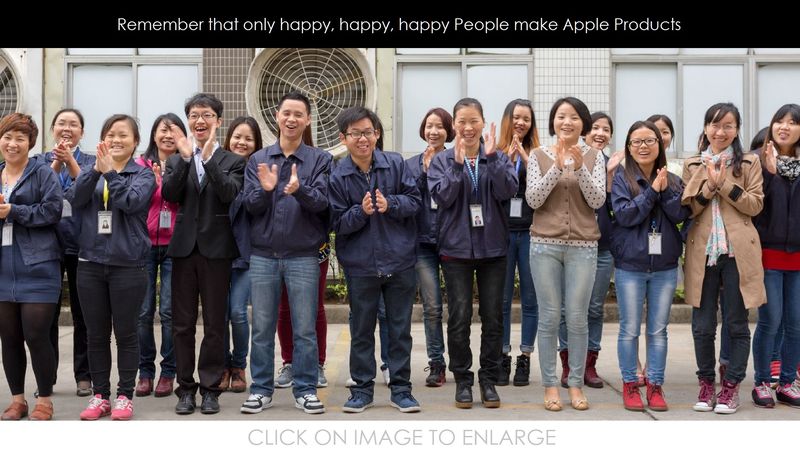 Apple Doctrine 101: Remember now, only happy, happy, happy people make Apple products! Our family photo above shows it like it is. If you say otherwise, then you must be a union commie! (ha!)

The hyperlink for "want the cheapest prices" noted above is from a DigiTimes report. Because their stories disappear after 3 weeks (or less) after publication, I'm adding the article graphic below to illustrate that we were showing an example of Apple squeezing suppliers for the best price which leads to pushing workers to do more. It's a vicious cycle. 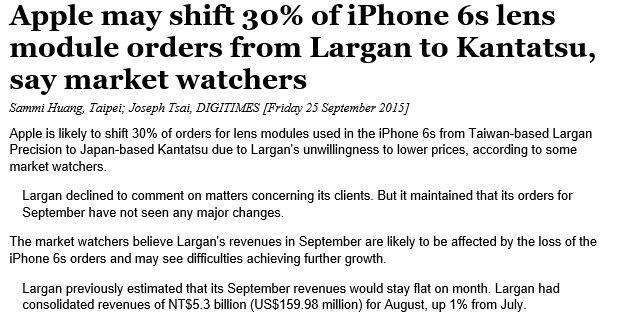